Carnegie Hill Neighbors, a preservation group said it planned to file an administrative appeal, and is preparing to go to court if necessary to stop the project.

“I am not sure what kind of building you can build on a 10-by-22-foot lot but I sure wouldn’t want to live there,’ said Council member Ben Kallos, a Manhattan Democrat, who is opposing the project. 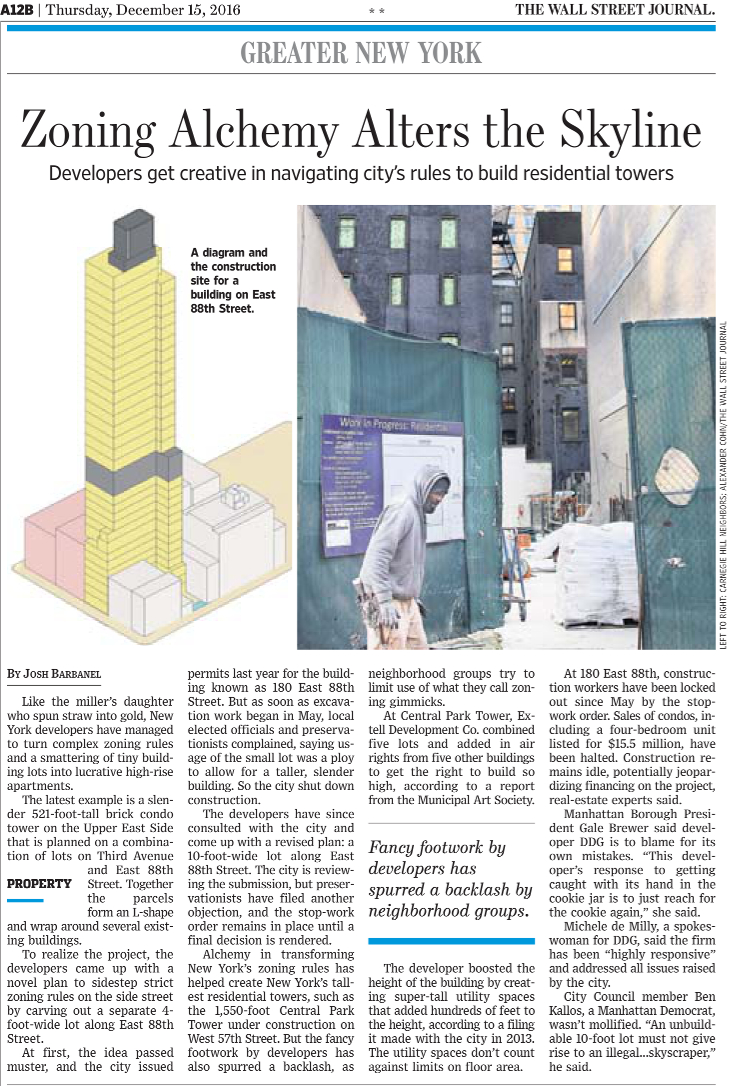 The plan, which the groups and officials said they were ready to formally propose to the City Planning Commission as early as this week, calls for buildings in the neighborhood to be no taller than 260 feet.

“I want to stop the march of 1,000-foot towers into residential neighborhoods,” said Councilman Ben Kallos, a Manhattan Democrat who is supporting the zoning change.

The groups hope it is approved before development work begins at the site. The proposed change also could discourage bidders at the auction, which was ordered by the court following a dispute between Bauhouse Group and its lenders, led by N. Richard Kalikow.

The zoning change isn’t the only hurdle the project faces. On Wednesday, the Department of Buildings blocked a permit needed to complete demolition of the site, after conducting an audit requested by Mr. Kallos.

The delay is a further setback, since the demolition was intended to enhance the site’s value to potential bidders.

The permit application, submitted as a result of a bankruptcy court order, was for stabilizing a building next door to the tower site, so demolition could proceed. But the buildings department blocked it.

Mr. Kallos said he was told that plans to protect tenants of the building, 426 E. 58th St., weren’t adequate.

Even before dawn broke in New York City on Tuesday, the lines of voters stretched down the block.

With reports of high voter turnout, some voters in Manhattan, Brooklyn and Queens said they waited hours to cast their ballots. Officials reported broken scanner machines and confusion at some polling sites.

“There were massive, massive lines and fire-code issues because so many people couldn’t get inside,” said Councilman Ben Kallos, a Manhattan Democrat, referring to a polling site on the Upper East Side.

Still, early indications showed that the city’s Board of Elections had fewer problems Tuesday, compared with the presidential primaries in April.

Councilman Ben Kallos, a Manhattan Democrat, and others have said the board should be nonpartisan. Political parties hold too much sway in the appointments, he said.

“At the end of the day when you have an institution run by patronage, where people are there because of who they know and not what they know, I will never be confident that they will be able to run a smooth election,” said Mr. Kallos, who leads a council committee that has oversight of the board.

Councilman Ben Kallos, who heads the committee on governmental operations, said he hopes the mayor will appoint “a person of stature who can stand up to any elected official and any candidate, who is nonpartisan and nonpolitical.”

Councilman Ben Kallos, a Manhattan Democrat and chairman of the hearing, pointed out that Mr. Shorris is responsible for about 30 different agencies, making it difficult for him to know exactly what each is doing.

Councilman Ben Kallos, chairman of the council’s governmental operations committee, asked whether the agency had approved similar deals. “Here’s a chance to come clean,” he said.

Ms. Camilo said the agency had put all of its “13 or 14” requests to alter deed restrictions on hold since the Rivington deal came to light.

Mr. Kallos said the Rivington deal was disturbing, in part because it allowed a building once designated for a nonprofit to be turned into condos when the city could have used the space for other needs.

“We need schools like you wouldn’t believe. We also need homeless shelters. And affordable housing,” he said.

Ms. Camilo said agency officials shared council members’ concerns about the Rivington deal. “No one was happy with the outcome,” she said.

But as city agencies spend more money and hire more people in the de Blasio era, Ben Kallos, a Manhattan councilman holding an oversight hearing on the city Monday, said questions should be asked when tougher targets aren’t set from year to year.