The pared-down event schedule also may affect climate-change demonstrations and other gatherings meant to catch the attention of top officials from around the world and the media.

The lack of a surge of diplomats will hurt New York economically in September, especially when the U.S. Open has no fans and New York Fashion Week will be reduced in size.

“A lot of restaurants, hotels and other venues are going to go unbooked, losing millions of dollars for the city,” said New York City Councilman Ben Kallos, who represents an area of Manhattan north of the U.N. “The only group of people I know who won’t be complaining is anyone who drives a car in Manhattan. That is the only silver lining.”

Mr. Medina is the former CEO of Puerto Rican Organization to Motivate, Enlighten and Serve Addicts, a nonprofit affiliate of Acacia. Neither he nor Distinctive Maintenance’s management team could be reached for comment.

After the city launched its initial investigation, City Councilman Ben Kallos, a Democrat who represents parts of Manhattan, called for a hearing on nonprofit city contractors.

He said the city should not have to worry about “self-dealing,” especially with funding for the city’s neediest. The hearing hasn’t yet been scheduled.

A New York City councilman is calling for a hearing to look at nonprofit city contractors after officials opened an investigation into the allegedly undisclosed business ties that a top homeless shelter provider has with a security firm.

The Wall Street Journal reported Thursday that the city’s Department of Investigation had opened a probe into the relationship between Acacia Network Housing Inc., a nonprofit homeless services provider, and SERA Security Services LLC. SERA was founded by the Acacia’s CEO, Raul Russi.

Since 2010, Acacia has received more than $1 billion in contracts from the city’s Department of Homeless Services to operate shelters. The nonprofit paid more than $12 million to SERA in 2017 for the firm to provide security services at some of Acacia’s shelters, according to the nonprofit’s most recent federal tax filing.

City Councilman Ben Kallos said he planned to enjoy Sunday’s sunny weather with his family aboard a NYC Ferry boat. He arrived at the ferry system’s East 90th Street stop in Manhattan just before 11 a.m. When a ferry pulled up, only 50 people, about half of the waiting line, were able to board, he said. The councilman and his family waited 30 minutes more for another boat. By that time the line had grown by an additional 40 people, who then had to wait for the boat after his.

“This is supposed to be a form of public transportation,” Mr. Kallos, a Democrat, said in an interview Monday. “We can’t live in a reality where you have to wait for a ferry and then not have enough room on that ferry. Or wait an hour or half an hour for the next ferry. That’s just not acceptable.”

In New York City, several buses serving special-needs students struggled to get through the city’s traffic-snarled roads. Five children spent more than 10 hours without a bathroom break or meal because their school bus got stuck in Manhattan and the Bronx on Thursday, according to New York City Council member Ben Kallos.

But others see an opportunity for reform at every level if the provisions pass.

City Councilman Ben Kallos, a Democrat who represents the Upper East Side of Manhattan, has pushed for campaign-finance reform since he ran for office in 2013.

“I really think that the system has too much big money into it,” he said. He hopes the changes will increase participation, particularly with first-time candidates.

“It is not humanly possible for someone to run for mayor on small dollars,” he said. “And with this change, it is.”

Ben Kallos, a Democratic councilman who represents the Upper East Side and Roosevelt Island, has pushed for more pre-K seats there for years, often sending photos of empty storefronts that could serve as centers to the Department of Education. Mr. Kallos said private pre-K in that area typically starts at $24,000 per child yearly, and getting a free public seat lets parents keep working and stay in the city.

“My only concern is that this is an incredibly popular program and it will continue to be a victim of its own success as more and more parents apply,” and demand will keep outpacing supply, he said.

Large buildings across New York will have to post letter grades in their lobbies disclosing their energy efficiency, if a measure before the City Council passes.

The new rating system is modeled after the ubiquitous grades for sanitation posted in restaurant windows across New York.

The proposal is part of a package of quality-of-life measures due to be taken up by the City Council on Tuesday, at its final scheduled meeting of the year.

A second measure is designed to limit noisy after-hours construction that has led to complaints in residential neighborhoods, especially on Manhattan’s Upper East Side.

The report card bill was approved by the council’s environmental protection committee on Monday. It requires both commercial and residential buildings with more than 50,000 square feet to post a notice near each building entrance.

The notice would include the posting of a federal energy efficiency rating already required under existing law, and a simplified letter grade from A-D  (or F for some buildings that fail to file) beginning in 2020.

Council member Daniel Garodnick of Manhattan, the lead sponsor of the bill, said he expected it to pass the council easily. He said it would allow commercial tenants and residential renters and owners to pressure building owners for improvements.

“We think that a market-driven approach here will help encourage more efficient buildings,” said Mr. Garodnick, whose tenure on the council ends this month because of term limits. “We think it will foster a higher level of engagement.” 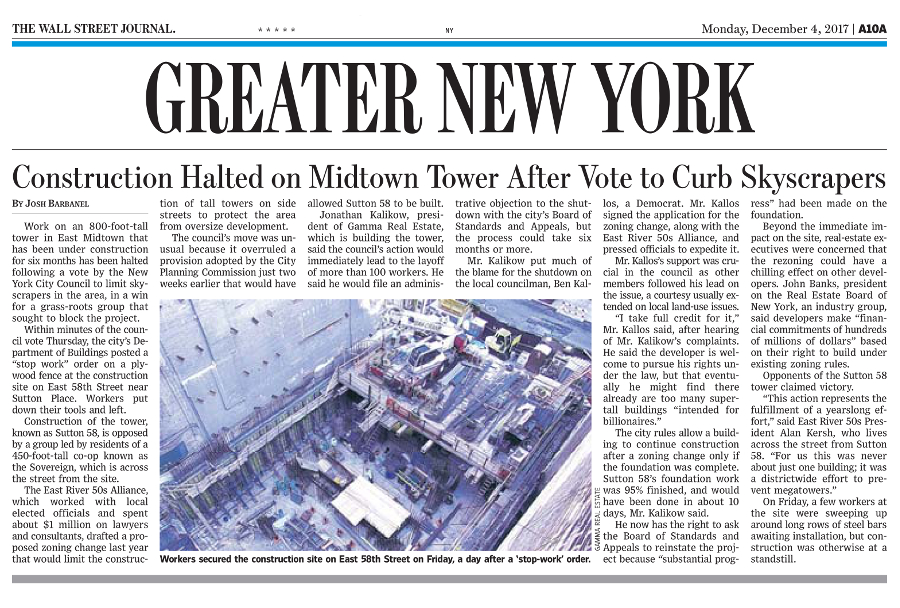 Mr. Kalikow put much of the blame for the shutdown on the local councilman, Ben Kallos, a Democrat. Mr. Kallos signed the application for the zoning change, along with the East River 50s Alliance, and pressed officials to expedite it.

Mr. Kallos’s support was crucial in the council as other members followed his lead on the issue, a courtesy usually extended on local land-use issues.

“I take full credit for it,” Mr. Kallos said, after hearing of Mr. Kalikow’s complaints. He said the developer is welcome to pursue his rights under the law, but that eventually he might find there already are too many super-tall buildings “intended for billionaires.”