In New York City, several buses serving special-needs students struggled to get through the city’s traffic-snarled roads. Five children spent more than 10 hours without a bathroom break or meal because their school bus got stuck in Manhattan and the Bronx on Thursday, according to New York City Council member Ben Kallos.

In a separate incident, Varda Steinhardt said her 16-year-old son, Jacob, who has autism, didn’t get home until 10 p.m. after seven hours on a school bus that kept getting stuck in the snow as it traveled north from the southern part of Manhattan. 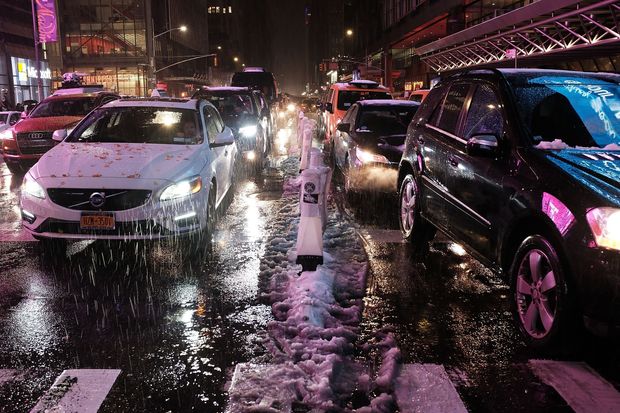 At times, she wanted to get on a subway to retrieve him but was afraid that, if she was out of cellphone reach, he would grow more upset. He kept calling her. “He was crying and screaming for about three hours on the bus,” she said in an interview Friday. “He has a tendency to think things are his fault, so he kept saying ‘Mommy, they’re going to arrest me!’”

The bus didn’t come to pick him up on Friday morning and she wouldn’t put him on it anyway. “It was so painful to be on the phone with him,” she said. “He’s OK today but will be talking about this for months.”

A city Education Department spokesman said in an email about 700 routes were reported as delayed yesterday, a little less than 10% of all routes.

“We’ve worked closely with bus companies and across city agencies to keep students safe, comfortable, and getting to and from school as efficiently as possible,” the spokesman said.

City Council Speaker Corey Johnson called for an investigation into the city’s handling of the season’s first winter storm, which dropped 4 to 6 inches of snow across the five boroughs.

“There are many council members and New Yorkers who want serious answers before we get into the later winter months so this cannot and should not happen again,” he said.

New Jersey Gov. Phil Murphy acknowledged Friday that state agencies had failed to respond quickly enough to the weather threat, which contributed to 1,000 road accidents and stranded almost 2,000 vehicles. “We could have done better, and we will do better,” he said during a news conference Friday morning. A spokeswoman for NJ Transit, the statewide rail and bus operator, said transit police are investigating the cause of a fatal crash in which a car was hit by a train at a railroad crossing in Murray Hill during the height of the storm, killing Susan Brown, 61 years old, of New Providence.

Grateful to the bus drivers, dispatchers, mechanics, and all who worked tirelessly throughout yesterday’s storm.

Usually, public agencies deploy an army of plows and salt spreaders ahead of storms. But this time, city and New Jersey officials appear to have been caught flat-footed. In contrast, New York state, which deployed 1,500 dump trucks and 175 plows in advance of the storm, reported few problems. “We were ahead of this,” New York Gov. Andrew Cuomo said Friday morning on an Albany radio station.

New York City’s Department of Sanitation was in charge of snow removal. A department spokesman Vito Turso said that almost 700 salt spreaders were deployed across the city by 12 p.m. Thursday, a few hours ahead of the first heavy snowfall, but many plows and snow-clearing vehicles became stuck in traffic caused by fallen tree limbs and already congested roads.

The subway, which runs mostly underground, fared well. But buses and cars became snarled on unplowed roads. “Our buses were held hostage to massive gridlock citywide,” said Jon Weinstein, a spokesman for the Metropolitan Transportation Authority, which runs the city’s buses. 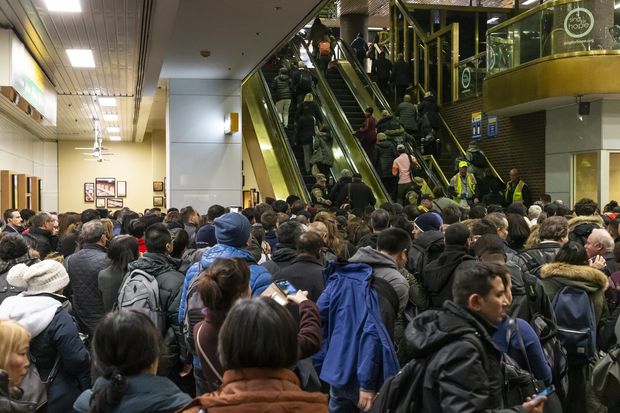 Mayor Bill de Blasio, in a radio interview Friday morning, said forecasters had predicted up to 2 inches of snow for the city. Instead, he said, it was pelted with “a particularly fast, heavy kind of snow” that coincided with the evening rush hour. By late Thursday night, the National Weather Service reported 6.4 inches of snow in Central Park. “We gotta learn some lessons,” Mr. de Blasio said.

Even under extraordinary and unpredictable circumstances, we have to do better. Six inches of snow shouldn't have this kind of impact on our city. And it won't next time.

“I’ve been doing this 37 years,” Chief Monahan said. “This was one of the most challenging nights I’ve ever seen with the way traffic hit, especially in the Bronx and Manhattan.”

Mr. Murphy said that his administration would review New Jersey’s storm response to determine what went wrong. “The buck stops with me, period,” Mr. Murphy said.

He said the forecast through midday Thursday only projected about 4 inches of snow for the state. The state Transportation Department sent trucks out salting roads but didn’t have plows prepped and ready to go because the forecast didn’t call for that, he said.

The National Weather Service reported snowfalls of between 6 and 8 inches across northern parts of the state.

By the time it became clear plows needed to be dispatched, schools and workplaces began sending people home, snarling roads and highways and making plowing almost impossible, said Diane Gutierrez-Scaccetti, commissioner of New Jersey’s Transportation Department. “We got behind the storm,” Ms, Gutierrez-Scaccetti. “We are not happy with it.”

Rick Cotton, the Port Authority’s executive director, said the agency had no choice. About 125,000 commuters use the terminal every weekday. During Thursday evening’s peak hours, only 232 of the regularly scheduled 1,429 buses showed up because they were stuck on roads outside the city, many of them in New Jersey, he said.

As a crowd of thousands built up across the terminal’s three floors, Port Authority staff walked the building with megaphones urging people to take other forms of transit, such as ferry or rail system home. “It was a bus supply problem,” Mr. Cotton said.

The Port Authority started letting people into the building again once the crush subsided. Chris Pernell, a doctor and New York University professor, arrived home to Montclair, N.J., more than three hours later than usual, at around 11:30 p.m. “It was horrible,” she said.