As the scaffolding has proliferated, the Buildings Department has faced growing criticism that it is not doing enough to police those structures that stay too long. A City Council bill targeting such scaffolding would require it to be taken down within six months of going up, or sooner when no work is being done. The bill has drawn opposition from building owners and managers who say they may not have the money to make repairs immediately.

City building officials say that scaffolding ensures public safety and that they are required to ensure that it remains up as long as a building needs work.

Over the years, the city has struggled to keep track of scaffolding when permits have lapsed, or when existing scaffolding is simply replaced with new scaffolding under a new permit. In the case of the Harlem building, city records initially showed that the scaffolding went up only in 2012, which is when the owner replaced it. 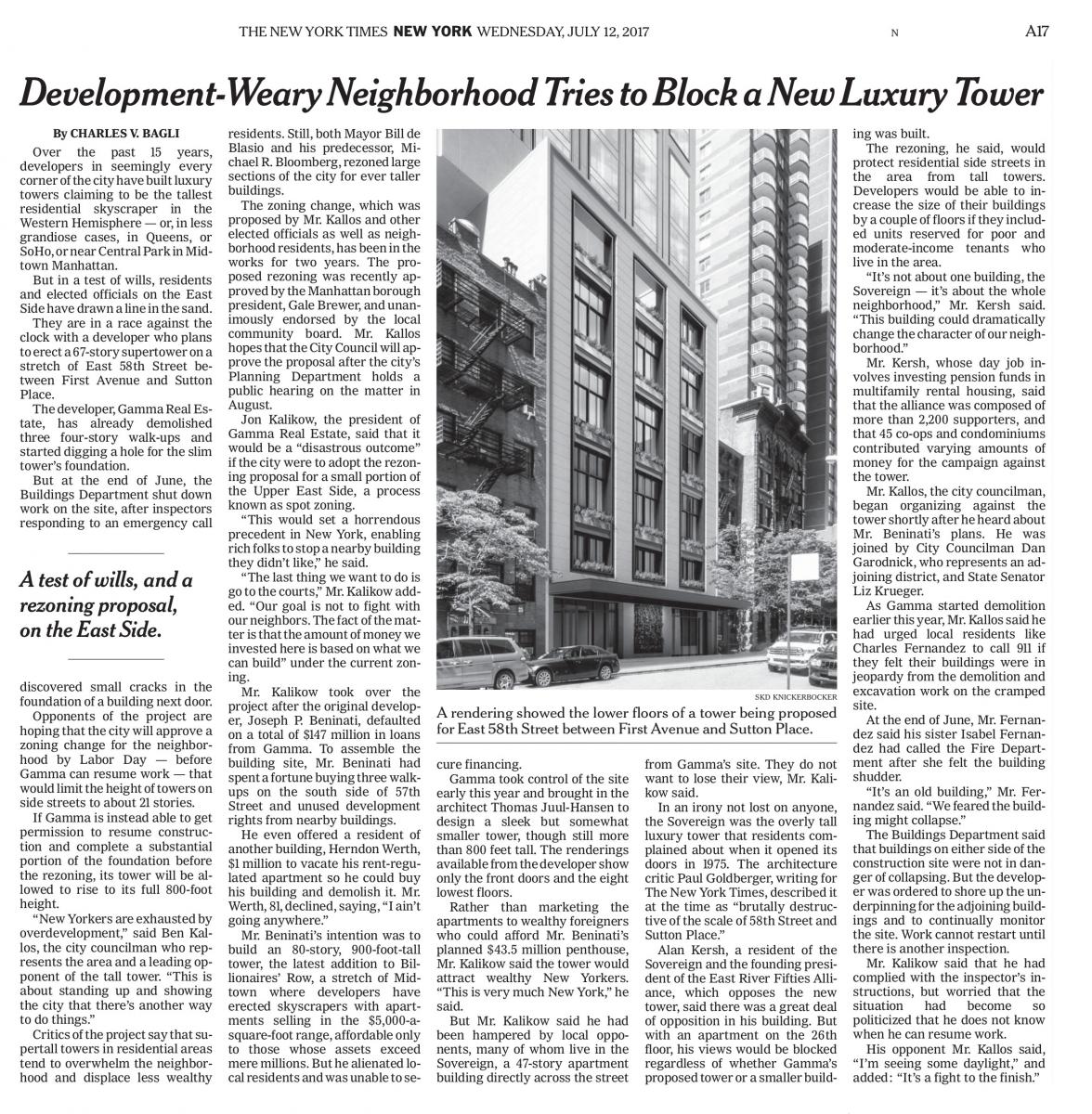 New York Times New York, a City Encased in Scaffolding by Editorial Board

While responsible apartment managers adhere promptly to the spirit of the building safety law, recalcitrant owners leave the sheds up for years as a cheap way to avoid making building repairs. There are no deadlines set to force the work to be done or the sheds to come down.

The pole-and-metal roofed structures, designed to catch debris, attract it instead, along with idlers and loners, according to the complaints of nearby residents who are urging the city to take action. City Councilman Ben Kallos has proposed legislation to force a timetable of three to six months on building owners, but some insist that they don’t have the money to finish jobs. Thus sheds stay perpetually, as much a protection for scofflaw owners as pedestrians.

New York Times New York Has 280 Miles of Scaffolding, and a Map to Navigate It by Winnie Hu

New York Times
New York Has 280 Miles of Scaffolding, and a Map to Navigate It
Winnie Hu

While Mr. Rubin said the city’s new scaffolding database would be useful, he added that it did not go far enough to address the problem. “As long as building owners find it cheaper and easier to keep up a sidewalk shed, rather than remedy the dangerous building conditions that make sheds required, the many problems that are caused by these ubiquitous sidewalk sheds will never be solved,” he said.

City Councilman Ben Kallos, who represents the Upper East Side, said he was “underwhelmed” by the building department’s efforts, adding that it will do little to address scaffolding that has overstayed its welcome. “We already know how big a problem it is, and unless the city is willing to take steps to get the scaffolding down, it doesn’t matter,” he said.

Mr. Kallos has proposed legislation that would give a building owner three months to repair a facade, with the possibility of a three-month extension, so that scaffolding can be removed within six months of going up, or sooner when no work is being done. The legislation has drawn support from many residents and business groups, including the New York State Restaurant Association and the New York City Hospitality Alliance.

Councilman Ben Kallos is expected to introduce a bill on Wednesday that would require the Education Department to release additional data such as the number of applications each school receives, how many offers it extends and where students live. Credit Emon Hassan for The New York Times

Mr. Kallos said that his constituents routinely complain of being turned away from nearby prekindergarten classrooms or gifted and talented programs, for which they have qualified, because there is not enough room.

This legislation would show where students end up when they leave their neighborhoods to attend school, as many do. Mr. Kallos said that most elementary schools in his district were populated with students from the area, but at Ella Baker School, at 317 East 67th Street, which serves students from prekindergarten through eighth grade, most of the students are from elsewhere.

A bill introduced last month by City Council member Ben Kallos would try to end this ridiculous time warp. It would require building owners to finish repair work in six months, so that sheds can be removed. If work on a building ever stopped for seven or more consecutive days, landlords would have to take the sheds down or risk being fined.

Even Yorkville’s city councilman, Ben Kallos, 35, who grew up in the neighborhood, is weighing how he and his wife can afford to stay in the district. He said there was little he could do to slow rising rents.

“Where I have to place much of my focus is on helping rent-regulated tenants stay in their apartment and exercise their rights,” said Mr. Kallos, a Democrat who has also pushed to set a height limit on so-called superscrapers in the neighborhoods he represents. 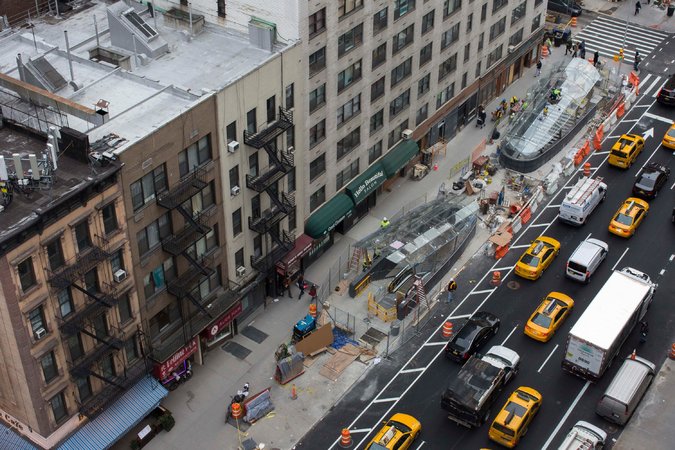 “We pursue that goal in every neighborhood in the city, including on the Upper East Side,” Mr. Finan said.

Across the United States, good transit access often leads to higher real estate prices, with home values near rapid transit in Boston, Chicago, Minneapolis-St. Paul, Phoenix and San Francisco far outpacing other properties during the last recession, according to a report by the American Public Transportation Association. 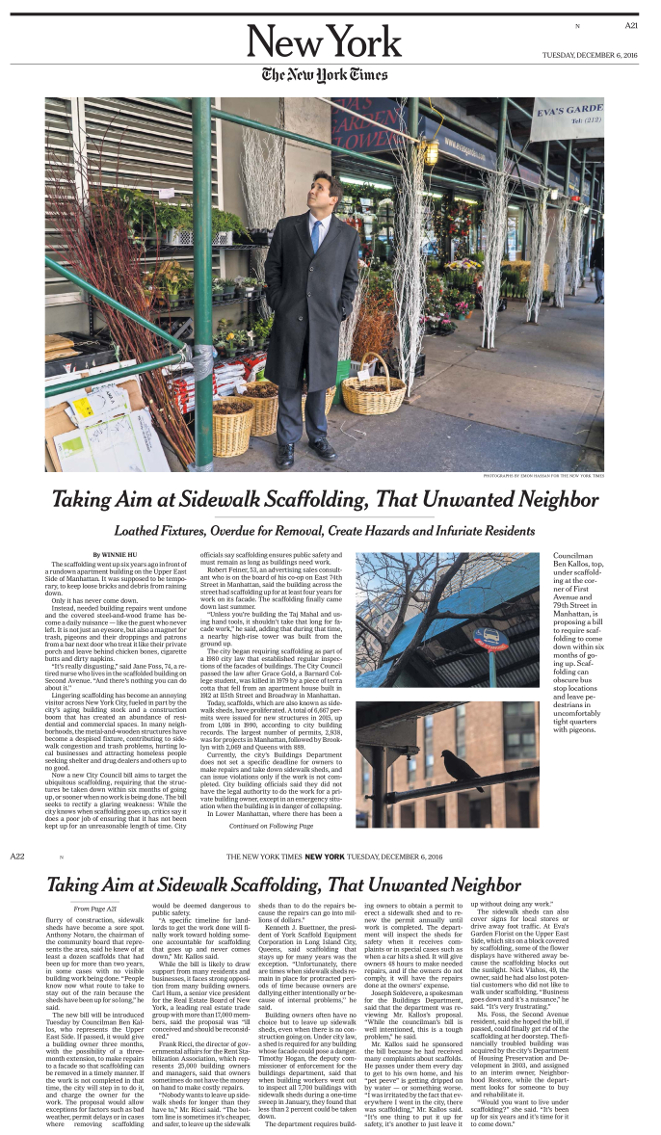 The new bill will be introduced Tuesday by Councilman Ben Kallos, who represents the Upper East Side. If passed, it would give a building owner three months, with the possibility of a three-month extension, to make repairs to a facade so that scaffolding can be removed in a timely manner. If the work is not completed in that time, the city will step in to do it, and charge the owner for the work. The proposal would allow exceptions for factors such as bad weather, permit delays or in cases where removing scaffolding would be deemed dangerous to public safety.

“A specific timeline for landlords to get the work done will finally work toward holding someone accountable for scaffolding that goes up and never comes down,” Mr. Kallos said.

While the bill is likely to draw support from many residents and businesses, it faces strong opposition from many building owners. Carl Hum, a senior vice president for the Real Estate Board of New York, a leading real estate trade group with more than 17,000 members, said the proposal was “ill conceived and should be reconsidered.”

Frank Ricci, the director of governmental affairs for the Rent Stabilization Association, which represents 25,000 building owners and managers, said that owners sometimes do not have the money on hand to make costly repairs.

New York Times ‘I Feel Very Happy to Be a Part of This’: New Yorkers Flock to the Polls by J. David Goodman

New York Times
‘I Feel Very Happy to Be a Part of This’: New Yorkers Flock to the Polls
J. David Goodman

The number of polling places in New York City has declined in recent years, with the 1,205 operating this year about the same as in 2012 but down from 1,349 in 2008, when President Obama was elected to his first term. Many polling places were consolidated to comply with federal regulations related to people with disabilities, said Councilman Ben Kallos, an Upper East Side Democrat who leads the governmental operations committee.

Over the same period, the number of active registered voters has increased to 4.5 million from 4.1 million.

Councilman Ben Kallos of Manhattan asked why Mr. Shorris had not followed up to make sure his decision — that the center should remain a nursing home — had been observed.