At 43, Sarah Kauss is old enough to remember going to high school before water came from plastic bottles.

“We would drink out of the water fountain,” she said.

By the time she enrolled at the University of Colorado Boulder, in 1993, the bottled-water trend had caught on, but so had environmental consciousness. She remembers being presented with a form containing a pledge not to use plastics. She signed.

Now settled in New York City — her office is a short walk from Madison Square Park in Manhattan — she wants to put something in students’ backpacks besides the usual kaleidoscopic batch of pencils and notebooks, along with the inevitable smushed snacks and the obligatory headphones: Reusable, stainless-steel water bottles.

She is donating the bottles, 320,000 of them, one for every high-school student in every public or charter school in the city. She can do this because she runs S’well, a company that markets the bottles. (Many are priced at $40 on the company’s website, but at least 10 go for $19.99.)

She cannot guarantee that students will use them, although City Hall and the Department of Education will work on that, with a program beginning this week called Bring It.

The goal is to slow the seemingly inexhaustible stream of discarded plastic bottles that clog waterways, threatening marine life, and that pile up in landfills. City officials say Bring It could lead to students using 54 million fewer single-use plastic bottles this school year. That also puts S’well well on the way toward its own goal of displacing 100 million bottles by 2020.

Displacing single-use bottles is an issue that Mark Chambers, the City Hall official in charge of the Mayor’s Office of Sustainability, said was related to a fundamental question of urban life: “How do we change our relationship to waste?”

Obviously, it is a question that has come up often as the country has debated pollution and environmental consciousness has surged. In April, Councilman Rafael L. Espinal Jr., a Democrat from Brooklyn, and Councilman Ben Kallos, a Democrat from the Upper East Side, proposed a ban on selling disposable plastic bottles in city-run parks, golf courses and beaches. The measure would cover soft drinks and juices as well as water. Other proposals would ban plastic straws that can be used only once, or plastic bags.

Mr. Chambers sees Bring It and the S’well bottles as “a great opportunity for us to make a strong public statement around why this matters” — and it is a statement that can be made without having to wait for a City Council vote.

He also sees Bring It as a way to change the demand side of the bottle equation: “By displacing single-use plastics, we’re limiting the resources that go into making them,” he said. “So this is about disconnecting ourselves from the fossil fuel industry that has gotten us into the problems we are facing.”

S’well is covering the cost of the bottles, so students will pay nothing. Ms. Kauss, when asked how much money was involved, said, “We haven’t run the numbers.” She added, “We’re not doing it because of the donation amount. We’re doing for the positive benefit, extending into the future.” 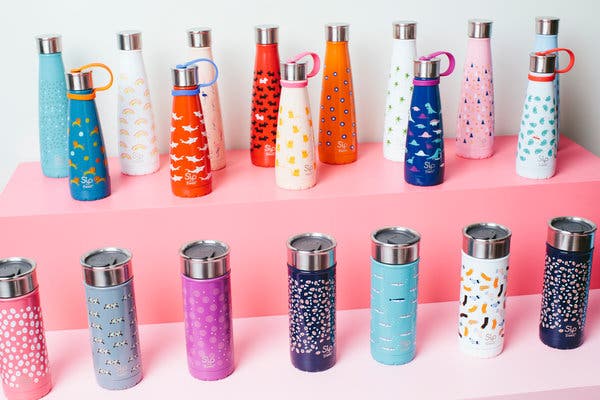 Ms. Kauss is donating 320,000 reusable, stainless-steel water bottles, one for every high-school student in every public or charter school in the city.CreditCeleste Sloman for The New York Times

The program will also extend S’well’s brand identity, of course, but Ms. Kauss put it differently. “This extends our mission,” she said. “I started this company because I wanted people to stop using single-use plastic bottles.” She hopes students will become “foot soldiers telling friends, telling families, using in soccer and after-school programs” about the importance of switching to bottles they can refill time and again.

She said S’well’s production team had worked to make bottles available for every school this week. S’well’s bottles are made in China. That raised the question of tariffs and the Trump administration’s trade fight with Beijing. “We watch that very carefully,” she said, “but luckily, we don’t have any issues so far. Right now the tariffs don’t affect our product classes.”

She started S’well in 2010 after a hike in Arizona. The reusable bottle she had taken along did not keep the water cold. Her brainstorm was to make a reusable bottle that was better insulated — and looked better. Most of the reusable bottles available then “looked like camping accessories,” she said. “My idea was to create this ‘it’ thing, almost a fashion accessory.”

By 2014, Fortune magazine was saying that what S’well produced “may be just a water bottle, but it is the sine qua non of water bottles — suddenly a feverish must-be-associated-with thing among a certain stylish, in-the-know set.” By then S’well had been featured in O, the Oprah Magazine, and its bottles were available in retail chains like J. Crew. S’well’s first customer had been a place she knew well, the Harvard Business School. She had received a master’s degree in business administration there in 2005.

Fresh dinner ideas for busy people who want something great to eat, with NYT Cooking recipes sent to you weekly.

She said her awareness of environmental concerns began before the high-school water fountain and the college pledge. “We were the first family on my street to have recycling bins,” said Ms. Kauss, who grew up in South Florida. “I have a fond memory of my dad filling up the back of the car with recycling bins and taking them downtown because this was before they came to pick them up. It imparted to me the importance of recycling.”

So did walks on the beach, she said. “Every time we’d go,” she said, “we’d take a plastic bag and fill it up with trash,” she said.

The conversation turned to environmental statistics and how daunting they can seem. She mentioned one, a prediction that by 2050, the plastic in the world’s oceans would weigh more than the fish. “Unfortunately,” she said, “plastic bottles are used more and more every year. The experts estimate 500 billion bottles are used in an average year around the world. Most are not recycled.”

In New York, every public school has been required to appoint a “sustainability coordinator” to promote sustainability since 2009. An analysis by Teachers College at Columbia University looked at the roles coordinators play and found that 40 percent of them are teachers, a third are assistant principals and the rest have other jobs, from secretaries to administrators. The analysis found that they tend to focus on resource management and recycling.

Bring It is counting on them to show that small individual actions like switching to a reusable bottle can dent those huge numbers. Of course, trade groups like International Bottled Water Association might see things from a different perspective. The association says it applauds efforts to encourage students to drink more water, but that single-serve bottles made of PET plastic are completely recyclable and that the bottled-water industry “has gone to great lengths to reduce the environmental impact of its packaging.”

Katie McCarthy, the sustainability coordinator at Sunset Park High Schoolwho also teaches environmental science to 11th graders, said the school recently installed a water-bottle filling station, thanks to a $7,000 grant from Mr. Chambers’s office. The device is handy, she said, because “with a water fountain, the angle isn’t as good.”

Also, she said, when students carry a bottle, “they don’t need to leave class” to go to a water fountain when they feel thirsty. “A water fountain is just a sipper,” she said. “A full bottle is for a period or two periods.”

She said Bring It would bring something besides bottles to Sunset Park: A sense of importance. She said that when the officials behind a program like Bring It “look at my students and say, ‘You’re the ones we want to make a change in the city,’ they’ll feel seen.”