As CBS2’s Vanessa Murdock reports, September will be a big month for Lily, 5, and her mom Jennifer Rescalvo. Lily starts kindergarten and says she can’t wait for the playground.

“She needs that interaction with other kids,” she said.

“The plan is to get them back in action. I don’t want to go through what I go through already last year,” said parent Rafet Olian.

Olian needs a break, and 6-year-old Sami is excited to go back.

“I can see all my friends and read,” Sami said.

“Our health care leadership has been very, very clear; our kids suffer when they are not in school,” Mayor Bill de Blasio saidTuesday.

De Blasio said in-person learning will get students back on track with their education, offer support to heal post-pandemic, and provide the food so many New York City School students rely on. The mayor says there’s enough room for all students to safely return to in-person learning.

“That three-foot rule is there now; we will make it work,” he said. “We proved that our gold standard of health and safety measures works.”

“A huge number of people have now been vaccinated. A much, much better environment than what we had to deal with last year,” he said.

Despite the positive outlook projected by the mayor, the City Council education committee wants the DOE to “offer a fall remote option.”

The bill’s passage came on Earth Day amid a flurry of environmental initiatives. But Ben Kallos, the district’s council member, said “a bunch of kindergartners” persuaded him to propose a city ban on pesticides in 2014. “It went nowhere,” he said.

Mr. Kallos said he tried everything as climate change pushed environmental issues higher on the agenda. He recalled holding “the best, cutest hearing ever” in 2017. Children mobbed the floor of the council chambers singing “This Land Is Your Land.”

Still, he said, City Hall and the Parks Department were resistant. But as word of the bill spread, public-housing residents and environmental groups teamed up with Ms. Rogovin’s students and their parents in a widening circle — and eventually signed up enough Council sponsors for a veto-proof majority.

Ms. Rogovin, 73, stuck with the mission even after she retired in 2018 after 44 years of teaching, and as her original kindergarten activists were entering puberty.

According to the NYSNA, at Mount Sinai’s main campus and Sinai West, workers are continuing to report chronic short staffing and a lack of supplies, with managers rationing PPE. They also stated that NewYork-Presbyterian has increased bed capacity within the Critical Care Units, Step Down and Med Surg units to handle any increase in COVID-19 patients as well as continuing lucrative elective procedures.

Rockefeller University will build a life-sciences hub on its Upper East Side campus, part of the mayor's push for new public health spaces.

UPPER EAST SIDE, NY — Rockefeller University will build a new life-sciences hub on its Upper East Side campus as part of a citywide push to make New York the "public health capital of the world," Mayor Bill de Blasio announced Thursday.

The $9 million grant to Rockefeller will help it convert some of its existing academic research labs into a new incubator for life-science companies, dubbed the Tri-Institutional Translational Center for Therapeutics. 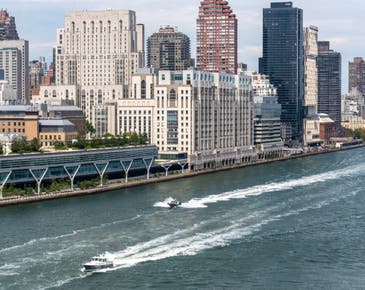 City officials said the 26,000-square-foot facility will be the first of its kind among the Upper East Side's collection of biomedical institutions, and will link up with Memorial Sloan Kettering Cancer Center and Weil Cornell Medicine to conduct research.

The facility has been years in the making, according to City Councilmember Ben Kallos, who began meeting with Rockefeller University to discuss the incubator space shortly after taking office in 2014.

""Biotech will own the future and if we learned any lesson in 2020, it is that New York City needs to become a hub for this industry as soon as possible," Kallos said in a statement. "These biotech centers will create thousands of good-paying jobs and have the potential to be crucial in discovering life-saving cures and treatments for diseases right here on the Upper East Side"

The city funding will cover only part of the cost of the new labs and Rockefeller will need to raise the rest, Kallos's office said.

The combined $38 million in grants announced Thursday are part of LifeSciNYC, a $500 million initiative launched by the de Blasio administration in 2016 to grow the city's life-sciences industry over the next 10 years.

De Blasio's administration has also backed a controversial proposal to greatly expand the New York Blood Center on East 67th Street, which officials said would help the city recover from the coronavirus pandemic by adding thousands of square feet of new lab space. Some neighbors, however, have opposed the plan due to its size and impact on the surrounding blocks. 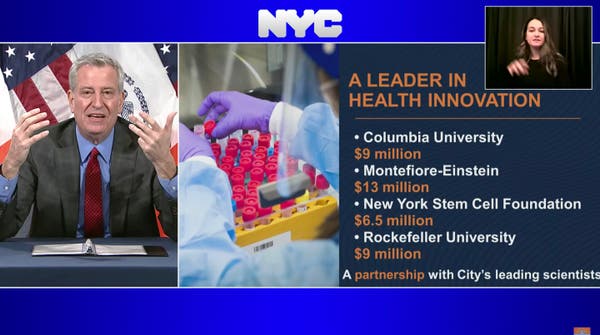 Rockefeller University, whose York Avenue campus stretches between 63rd and 68th streets, opened four new buildings on a platform above the FDR Drive in 2019.

One of the nation's most prestigious research institutions, Rockefeller's faculty have won 26 Nobel Prizes.

"By consolidating existing collaborations and providing much-needed biotech incubator space into the bargain, this new center will focus the boldest biomedical science in the world on solving today's most challenging medical problems – while also growing the fast-emerging biotech sector in New York City."

The letter followed reports that Upper East Side bars have been serving patrons who were gathering outside the establishments without regard for social distancing guidelines. The lawmakers suggested that to fix the problem, the City’s streets should adapt to make following those guidelines easier.

“We are all in this together,” they wrote. “It is not working to confine New Yorkers to narrow sidewalks and rely on enforcement to prevent crowding. The best way to keep New Yorkers safe is to reorder our streets for social distancing.”

Council Member Ben Kallos of the Upper East Side joined the fight on Sunday, firing off a letter to the mayor demanding the removal of parking so that restaurants in his district could operate safely. Kallos said his concern came after watching crowds gather outside restaurants in his neighborhood during the warm weekend.

“I have long thought about the fact that on a given street with 5,000 to 10,000 people living on it, there are 50 parking spots — which means that 50 people prevent 5,000 to 10,000 people from having complete streets with bike lanes, bus lanes and micromobility,” Kallos told Streetsblog on Monday. “But now people are engaging in risky behavior, so let’s create safe spaces to reduce the risk of behavior they’re going to engage in anyway.”

Kallos likened it to the city’s distribution of free condoms.

New York City should create open space for businesses to establish outdoor cafes where customers can safely take in a meal or drink outdoors while remaining at a safe distance from others, City Councilmembers Ben Kallos and Keith Powers wrote in a letter to Mayor Bill de Blasio this week. Both lawmakers said that restaurant owners will continue to risk fines and create dangerous, crowded situations if the city's approach does not change.

"Rather than rely on enforcement or fine individuals and small businesses that may already be hurting financially from the pandemic, we should adapt our city's streets to allow for and encourage safe practices. Without granting businesses a better option, we are afraid restaurants and bars may just take the risk and pay whatever violations may be issued as a cost of doing business rather than shutter their doors permanently," Kallos and Powers wrote.

Electeds on the Upper East Side are continuing the citywide effort to keep local government connected with its constituents during the worst crisis the City has seen in recent memory.

Last Tuesday, Councilmember Ben Kallos (D-Upper East Side, Midtown, El Barrio and Roosevelt Island) brought together NYC Health Commissioner Oxiris Barbot, a senior analyst at NYC Department of Health and Mental Hygiene, and a plethora of Upper East Side electeds in a virtual town hall via Zoom to talk about the coronavirus.

The beginning of March feels like a lifetime ago, before the “new normal” we are all now living. Thank you to every New Yorker who is staying home, to those working in essential roles, and to everyone making huge sacrifices as we work together to flatten the curve to save those most at risk from COVID-19. Although we won’t be returning to our regular routines in time for the upcoming holidays, I want to wish everyone a Happy Passover, Easter, and Ramadan.

Senator Chuck Schumer led the Senate in passing a $2 trillion relief package that was signed into law yesterday that includes direct $1,200 payments, improved unemployment benefits, funding for the MTA, medical supplies for New York, and loans for small businesses. Learn how it applies to you.

To combat the pandemic, we've supported efforts to open 550 beds in the district for the surge, and we have connected with countless people near and far offering to donate, manufacture, or source personal protective equipment to the city and state's healthcare systems. We've provided laptops to students to learn from home and worked with internet service providers to provide free broadband to students who don't already have it. New York state remains under the Governor’s “PAUSE” directive.

I wrote an op-ed in Crain's with economist Teresa Ghilarducci outlining the 5 things we can do to save small businesses. I also wrote an open thank you letter in LaborPress to the teachers, healthcare workers, cleaners, MTA workers, police officers, EMTs, utility workers, restaurant workers and delivery workers who have been keeping this City running during this time.

One tradition I would still like to honor is my office’s monthly First Friday meetings. I am inviting residents to join me for a First Friday on video or tele-conference on April 3rd at 8:00am using Zoom.

How have you been holding up? Is there anything I can do to help? Let me know.

As of this afternoon there were more than 5,200 cases statewide and 3,615 cases in New York City.

We continue to monitor the situation closely and are actively working with the community, the private sector and health providers to increase capacity for a likely surge and increase access to testing.

The following information and resources can help you get up to speed on the latest developments, get involved, and ensure you have everything you need to stay healthy in body and mind:

The basic advice remains the same: healthy or sick, please stay home. You should only leave your home for essential tasks such as work (if you cannot work from home), and getting groceries and supplies or essential medical care. You do not need to panic if you feel sick. If you are sick, stay home. If you do not feel better in three to four days, consult your healthcare provider. Try to call, text, tele-medicine or use your patient portal to contact your physician.

Thank you for all of your sacrifices you are making as we seek to get through this pandemic together. While we've done our best to provide the most useful updates, we've put together additional resources and will be updating them at BenKallos.com/corovavirus

As the coronavirus continues to spread, my team and I are monitoring the latest updates and will keep you apprised of the simple steps you can take to keep yourself and our community safe. Please continue to let me know any question or feedback you have, or even just how you are staying engaged or passing the time at home!

P.S. If the links in this email aren’t working for you, please click here to view it in your browser. You can see our prior updates at BenKallos.com/newsletters or click Update #1, Update #2.