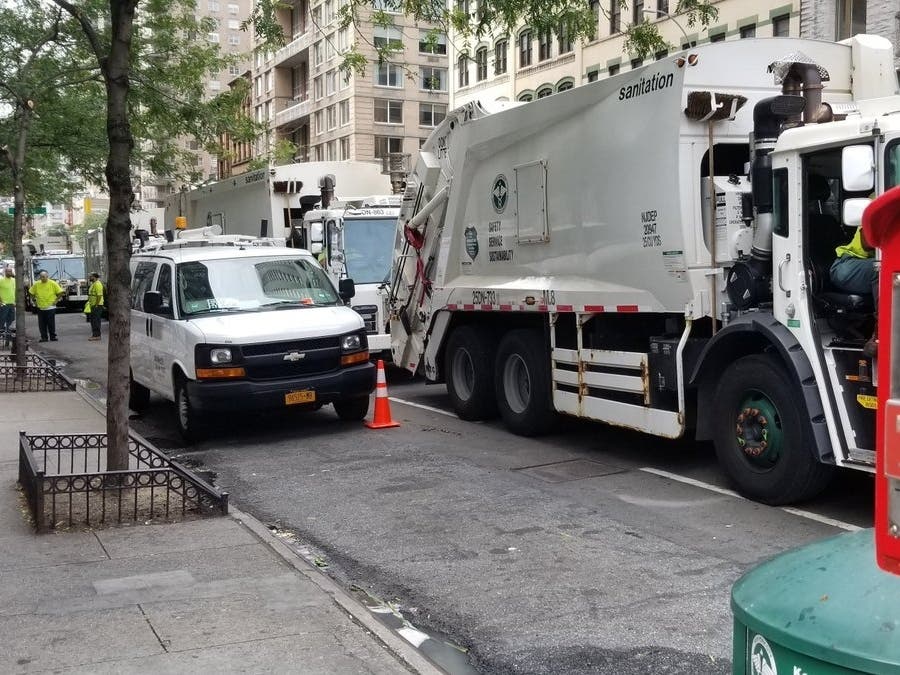 UPPER EAST SIDE, NY — A procession of garbage trucks has been clogging an Upper East Side avenue on weekday mornings for weeks, angering a local lawmaker who witnesses the daily display.

As many as 10 trucks line up along Third Avenue each morning between East 87th and 90th streets, according to Kallos, who said the ordeal has been going on for weeks, if not months.

Many of the trucks are double-parked and idling — a violation of city law. Then there's the odor.

"It smells putrid. It smells like trash here," said Kallos, whose district office is a few blocks away.

"The area in question is used by crews to meet with supervisory personnel and go over assignments regarding cleaning and community concerns – a necessary part of our work keeping the neighborhood safe," Sanitation spokesperson Joshua Goodman said in an email.

"We strictly adhere to the New York State and City idling guidelines, but will speak to all crews about avoiding congregating, including during their contractually-mandated break," Goodman said, adding that the agency would "do what we can to keep traffic moving while serving the residents of the Upper East Side."

Kallos remained skeptical of the explanation, saying he has never seen a Sanitation supervisor during the morning lineup.

"I don't see them meeting with anybody," he said. There's like four guys standing there, just talking."

Kallos tweeted about the issue Wednesday morning, and said he was awaiting a response from the Sanitation Department.