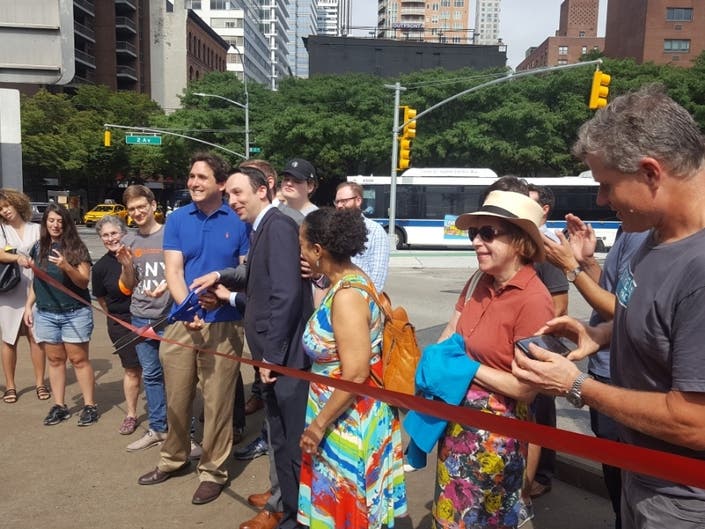 Cyclists and politicians said the gap int he Second Avenue bike lane was previously a "death trap," but now it's a safe route. (Brendan Krisel/Patch)

UPPER EAST SIDE, NY — Safe streets advocates and local elected officials gathered at the mouth of the Queensboro Bridge on Second Avenue Friday to tout a recent bike lane extension that closed one of the last remaining gaps on the avenue's bike lane network.

The city Department of Transportation painted new lanes in June between East 68th and East 59th streets in June including the portion of the avenue that crosses the Queensboro Bridge. The avenue's bike lane now stretches from East 125th Street down to East 43rd Street, DOT Manhattan Borough Comissioner Ed Pincar announced.

"Pedestrian and cyclist safety is first and foremost in my office. The Second Avenue bike gap was dangerous; a tragedy waiting to happen," Kallos said.

A bike rider himself, Kallos was always weary of crossing East 59th Street and Second Avenue, which was considered one of the most dangerous intersections in his district. Kallos said he biked to Friday's rally.

City Councilmember Keith Powers, whose district meets Kallos' at the intersection, celebrated the new lanes but said that the city still has work to do to make Second Avenue safer — particularly on the Midtown portion of the avenue. Powers singled out the bike lane gap near the Queens Midtown Tunnel as a priority. Pincar said Friday that the Department of Transportation is currently studying the area near the tunnel and hopes to pitch safety improvements soon.

"Second Avenue is not just an important thoroughfare for cyclists, it is a corridor share by all road users," Pincar said. "As part of the Mayor's Green Wave plan, we are committed to even more protected bike lanes."

As many as 2,400 cyclists reached the intersection of East 59th Street and Second Avenue before the bike lane gap was closed, and city Department of Transportation planners said they expect that number to rise after the safety improvements.

Cylist Jon Orcutt said that he changed his daily commute to include the stretch of Second Avenue after the new lanes were painted. Orcutt — who is also a spokesman for the group Bike New York — now bikes along Second Avenue between his job in Morningside Heights and his home in Greenpoint, Brooklyn.

"I wouldn't come across this hellhole of 59th Street from the park because there's no good connection, but now with this fixed I come across the cross-park road at 72nd Street, come straight over to Second Avenue and I can loop right onto the bike lane," Orcutt said. "It's a little slower, but it's so much more chill."

The most significant aspect of the new lane is the crossing of the Queensboro Bridge on-ramp, which required city planners to take a "creative" approach.

"Before the situation you had was that you had a perfectly good bike lane on the side of the street where you felt safe and then all of a sudden you were kind of flung into this area where you didn't know what to do and you had all these cars that are maximum state of anxiety as they are about to get out of Manhattan," cyclist Jason Gers said. 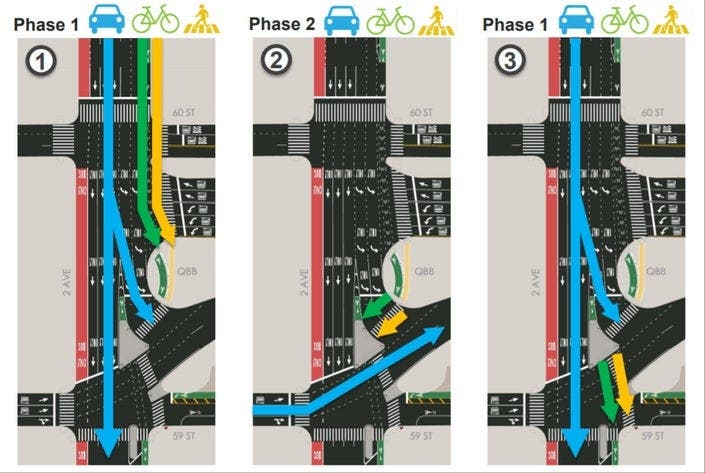 A depiction of the new bike lane that crosses the Queensboro Bridge approach. Courtesy DOT 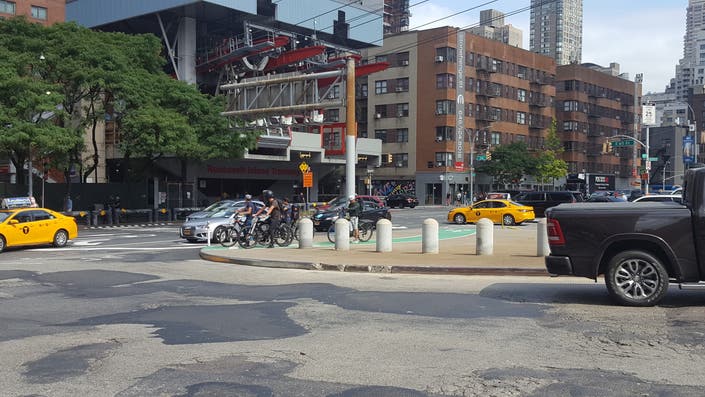 Cyclists wait at one of the crossings in the 59th Street and Second Avenue intersection. (Brendan Krisel/Patch)

Second Avenue between East 59th and 68th streets was one of the most dangerous stretches in Manhattan before the safety fixes, city officials said. Between 2012 and 2016 there were 363 injuries involving pedestrians, bicyclists and motor vehicle occupants on the stretch of Second Avenue, 26 of which are considered serious injuries, according to a DOT statistics.