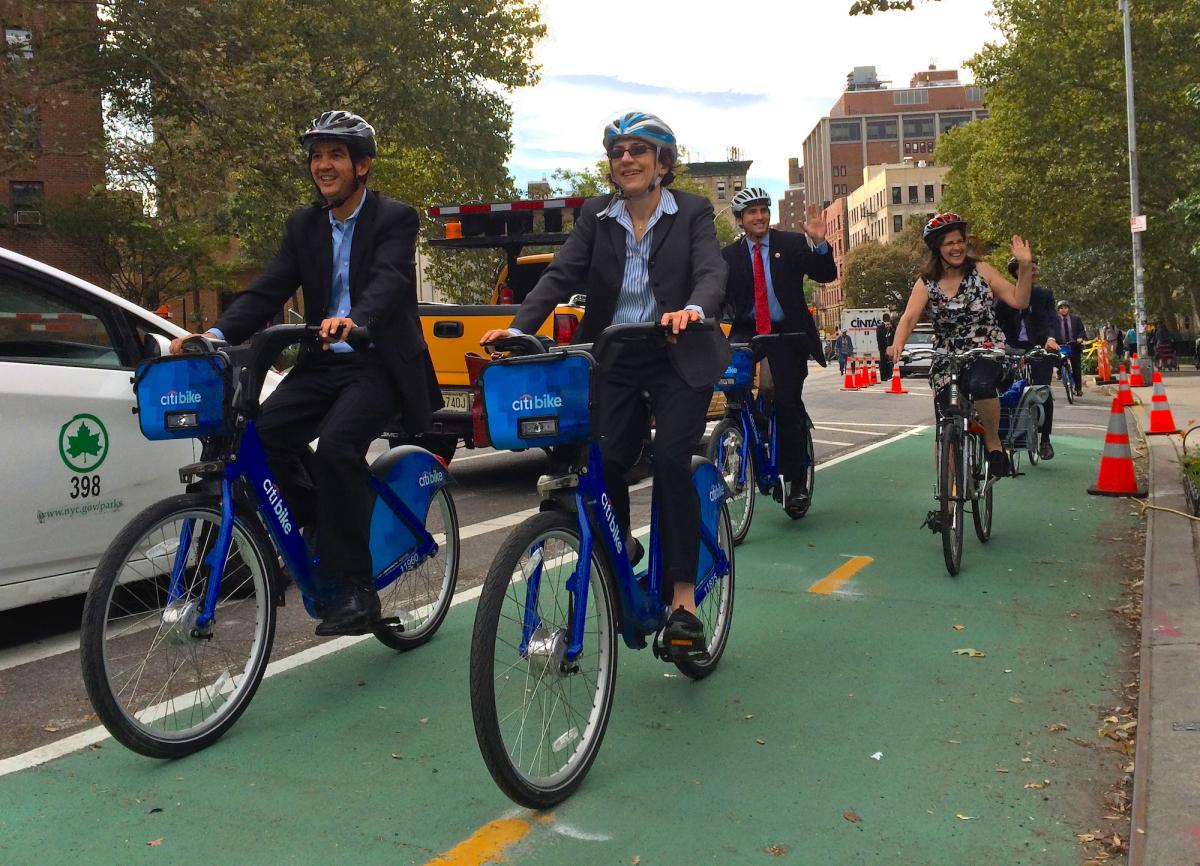 Think DOT’s bicycle program has lost its mojo? Transportation Commissioner Polly Trottenberg begs to differ, and she made her case today at an event highlighting bike projects that are now in progress or have recently been completed.

Last year, Bicycling Magazine named New York the best American city for biking, just nine months after Trottenberg took over at DOT. “We felt an obligation to double down on our efforts to encourage and support bicycling in New York City,” Trottenberg said at a press conference this morning touting the administration’s bike lane progress. “Expanding and upgrading the bicycle network is an important step.”

The city is on track to install 12 miles of protected bike lanes by the end of the year, above its five-mile annual target and the highest amount ever installed in a calendar year. The city has also surpassed 1,000 miles of bicycle facilities, DOT said, with 1,010 miles citywide.

DOT counts bike lanes on the Greenpoint Avenue Bridge, W. 170th Street, Fort George Hill, Seaview Avenue,Edgecombe Avenue and Clinton Street toward its tally of protected lanes completed this year. Work on Queens Boulevard, Lincoln Square and First Avenue is expected to wrap by the end of the year. In addition, Pulaski Bridge and Bruckner Boulevard protected bike lanes, already under construction, are slated to open next year.

There’s no doubt that protected bike lane mileage is expanding at a healthy clip this year, but there are some asterisks.

Not all of these bike lanes are protected from car traffic by parked vehicles or concrete barriers. Some are separated from moving cars only by flexible posts. DOT also includes Vernon Boulevard, a two-way bikeway from 2013 that received concrete barriers this year, and E. 37th Street, which was striped last November, in its totals for this year.

While its progress on protected bike lanes is encouraging, DOT’s overall bike lane numbers are less robust. The agency has installed 27 miles of bike lanes so far this year, Trottenberg said, 23 miles short of its 50-mile annual goal.

Another third of the total is managed by the Parks Department, said Parks Commissioner Mitchell Silver, including everything from major greenways to boardwalks and dirt trails. Much of these off-street paths are high-quality bikeways, but the Parks Department doesn’t manage them as transportation routes, meaning they tend to be closed at night.

With Manhattan having a higher concentration of bike lanes than the other boroughs, Trottenberg said she hopes to accelerate bike network expansion outside the city core.

“Now, outer-borough areas also are connected with bike lanes,” said City Council Transportation Committee Chair Ydanis Rodriguez. “That represents… how this mayor, how this commissioner, are doing the work and how they are fighting against inequality.”

A top complaint from cyclists is that DOT can take years to replace faded bike markings. Trottenberg acknowledged that challenge, blaming it in part on rough winter weather. “We have now got an aggressive new contract in, and we are looking at a bunch of things to try and improve the durability of the striping — looking at some better products, looking at doing more scarification, essentially, in the roadways so the paint will stick better,” she said.

The event was held along the Clinton Street bikeway, which is being installed after receiving support from Manhattan Community Board 3 earlier this year. Older residents of the Seward Park Cooperative apartments, which has buildings on both sides of Clinton, crashed the press conference to oppose the new bike lane and the 2012 change that moved some Williamsburg Bridge-bound drivers to Clinton Street. “The blood is on your hands when I get hit by a bike!” one audience member yelled at Trottenberg.

The Seward Park residents also wanted a mid-block crosswalk on Clinton between Grand Street and East Broadway, a longstanding request [PDF]. Before today, DOT said only that it would study the idea, said CB 3 transportation committee chair Karen Blatt. After the press conference today, Trottenberg promised residents that a mid-block crossing would be installed.

Council Members Ben Kallos and Helen Rosenthal were also at today’s event. Sensing the anti-bike sentiment from local seniors, the Upper East and Upper West Side council members bragged about how theirlocal precincts were cracking down on cyclists.

Some things, it seems, never change.

Stephen Miller is a reporter for Streetsblog NYC. He has been covering the movement for safer streets, effective transit, and livable cities since 2012.