StreetsBlog
Citi Bike Arrives on the Upper East Side and Upper West Side
Stephen Miller
http://www.streetsblog.org/2015/09/01/citi-bike-arrives-on-the-upper-east-and-u… 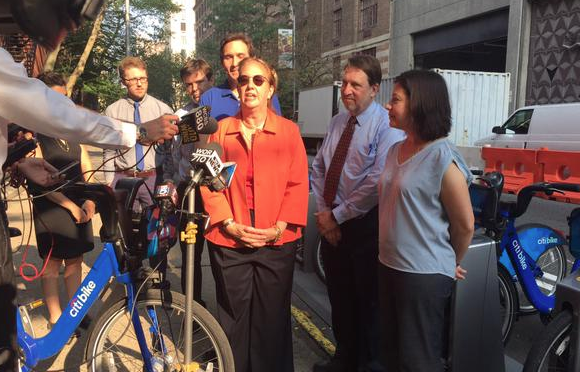 Citi Bike has begun its expansion to the Upper East Side and Upper West Side.

While the latest expansion is exciting, the station density on the Upper East and Upper West sides is lower than both the existing Citi Bike service area and DOT’s own density targets. This makes bike-share less convenient, potentially hampering ridership in two of the city’s densest neighborhoods. At this morning’s event, Daily News transit reporter Dan Rivoli asked about station density, and Kallos said he would welcome additional bike-share stations in the neighborhood.

Most stations in Citi Bike’s latest round of expansion have already been installed in Long Island City, Greenpoint, Williamsburg, and Bed-Stuy. Expansion will continue next year, with stations in Harlem, Crown Heights, Prospect Heights, Park Slope, Carroll Gardens, Cobble Hill, and Red Hook by the end of 2017.

New York isn’t the only city in the area getting bike-share stations: The first of 35 Jersey City bike-share was installed today.

Stephen Miller is a reporter for Streetsblog NYC. He has been covering the movement for safer streets, effective transit, and livable cities since 2012.