Our Town When a Playground Disappears by Daniel Fitzsimmons

Our Town
When a Playground Disappears
Daniel Fitzsimmons
http://www.nypress.com/local-news/20150922/when-a-playground-disappears 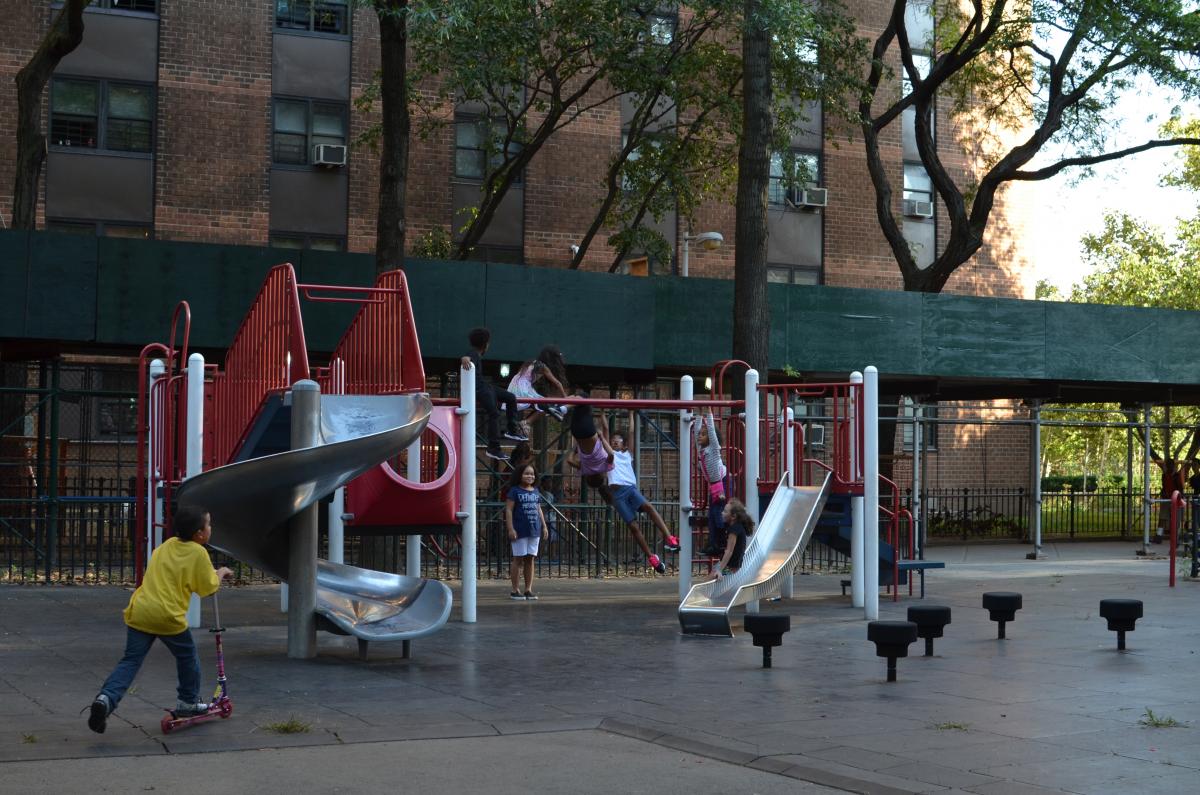 The New York City Housing Authority shocked public housing residents and lawmakers when it announced a proposal to build affordable housing on playground space at Holmes Towers on the Upper East Side.

In a bid to raise revenue and increase the affordable housing stock in Manhattan, the administration is proposing to sell or enter into long-term leases with developers to build 350-400 apartments on playground space at Holmes, 175-200 of which would be affordable. The remainder of the apartments will be offered at market rate.

The agency released a statement last week that said since May, NYCHA has been rolling out key pieces of “NextGen NYCHA,” billed as a 10-year strategic plan to address the agency’s “chronic operating deficit” and $17 billion in unmet capital needs.

Holmes Towers’ residents and local elected officials said they were not briefed on the proposal before it was announced last Thursday, and there are already several problems with the plan from their point of view. For instance, in order to qualify for the affordable apartments, a potential resident would need to make a minimum of 60 percent of the area median income, which is equivalent to a family of three making $46,600.

A NYCHA spokesperson said a mixed-income building at Holmes is a balanced approach to the financial crisis facing NYCHA as it ensures both needed affordable units and revenue generating market rate units, and funnels a significant portion of revenue back into Holmes, with the remainder applied to NYCHA-wide needs.

“The future of NYCHA is resting on all of us, even critics, to find the best path forward to generate the funds to keep NYCHA open for business,” said the spokesperson. “NYCHA is facing the worst financial crisis in its history — the Authority does not have the funds to address the infrastructure needs of our buildings, including the buildings at Holmes, which directly impacts the quality of life of our residents.”

But Greg Morris, executive director of the nearby Stanley Isaacs Neighborhood Center, said Holmes and Stanley Isascs residents feel they’ve been marginalized for decades, most recently by the city’s decision to move an access ramp to the East 91st marine transfer station to East 92nd Street, right past Holmes Towers. Now, said Morris, the city is appropriating what meager open space the community has in a deal with no clear upside to existing residents.

“I think what I’m hearing from the community is, ‘Look, you neglected us on the marine transfer station, we weren’t really in that conversation in a constructive way. Now you’re going to make the ramp one block closer to us, so that’s going to potentially impact us more, and now you want our space because you think you can raise revenue. So now you want to be in dialogue with us about the needs of the community. Where were you before?’”

Velasquez also scoffed that revenue from the plan being used to make much-needed repairs at Holmes is being billed as a benefit for the community. “Those are repairs that should be done anyway,” she said.

And other issues remain. There are two playgrounds at Holmes Towers, which houses about 930 residents in nearly 540 units split between the two 25-story towers. According to NYCHA’s proposal, the displaced playground would be replaced elsewhere on Holmes’ property. But the city did not specify which of the playgrounds it would be building on, nor where a replacement playground could or would fit on the site.

NYCHA said the site for the replacement playground will be determined by input from residents at a series of collaborative meetings that are set to occur.

“We’ve asked residents, advocates and others to have a seat at the table to help solve this problem and to keep an open mind as stakeholder engagement moves forward,” said a NYCHA spokesperson.

Velasquez and Morris suspect NYCHA aims to build at 405 East 93rd Street, the bigger of the two playgrounds, as opposed to a smaller playground at 1780 1st Avenue, at the corner of 93rd Street.

“The garbage trucks are going to go by Holmes,” said Brewer. “It’s hard for the residents.”

She also criticized the plan for retroactively engaging with tenants of Holmes Towers after key decisions have already been made. She also wants any residential project at Holmes to be one hundred percent affordable.

“I don’t know that I’d call it a joke, but I’d call it a challenging process,” said Brewer of the city’s forthcoming attempt to win tenants over to the plan. “I would want a hundred percent affordable with much discussion about what affordable is.”

Councilmember Ben Kallos, who is also opposed to the plan, agreed.

“I think we’re going to make it as hard for the mayor to do this as possible,” he said.

Kallos said NYCHA is set to meet with residents to review the plan on Oct. 7.