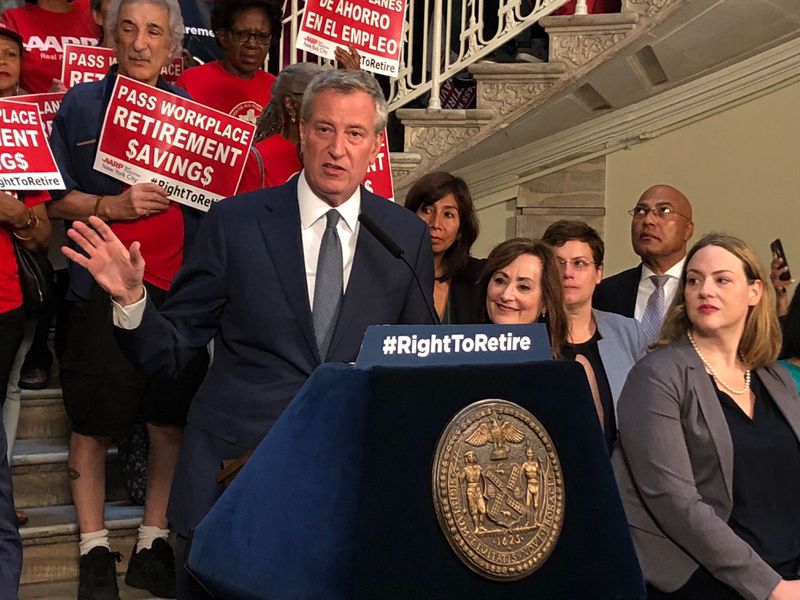 More than 2 million New Yorkers would be automatically enrolled in retirement savings plans under a bill touted by Mayor de Blasio on Monday.

Under the plan, workers at every business in the city with 10 or more employees would be automatically enrolled in individual retirement plans, or IRAs, with a contribution rate of 3% of their salaries per paycheck.

The plan would apply to every worker above age 21, and businesses with fewer than 10 employees could sign up, too. The city is proposing Roth IRAs in which withdrawals are tax-free after retirement.

The mayor would appoint a panel to administer the accounts, while day-to-day operations will “likely” be run by a private third-party company, according to John Adler, director of the Mayor’s Office of Pensions & Investments.

“Because of the lack of coverage, we are going to face a crisis in the next 10 years,” New School Professor Teresa Ghilarducci, who co-authored the study, told the Daily News.

She applauded the legislation from Councilmen Daneek Miller (D-Brooklyn) and Ben Kallos (D-Manhattan), saying, “It makes a huge difference” for both young and old workers.

Compound interest will enable young earners to save thousands in the long haul, she said, while older workers will have a cushion whenever the next recession hits.

The Council held a hearing on the legislation on Monday, with reps from AARP and the DC37 union of municipal employees attending.