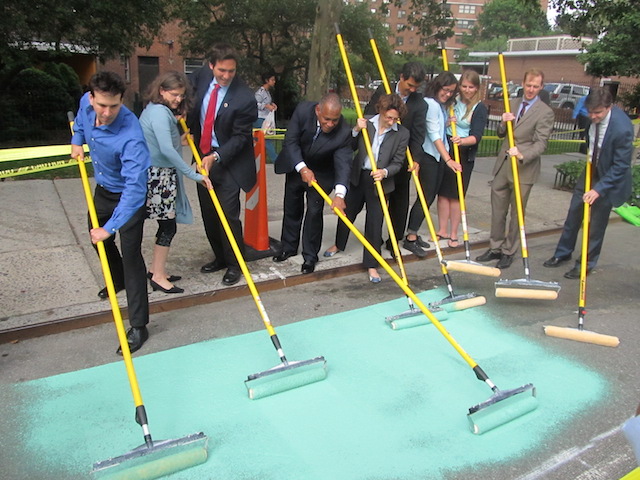 At a DOT press conference today touting over 1000 miles of bike lanes in the city, Commissioner Polly Trottenberg revealed the planning of a mile-long protected bike lane on Sixth Avenue between 14th and 33rd streets—but the announcement was overshadowed by outrage from community members, one of whom declared the event "a celebration of stupidity."

The announcement was made on Clinton Street, whose bike lane is one of the latest additions to the city's steadily expanding network: by the end of this year, new lanes will be completed atQueens Boulevard, Columbus Avenue, and First Avenue, contributing to over 12 miles of protected bike lanes completed in 2015.

In 2012, Clinton Street became an access route to the Williamsburg Bridge and was turned intoa one-way northbound street between Grand and Delancey. In August, it was narrowed significantly to accommodate the eight-foot-wide protected bike lane.

The two-way Clinton Street route connects the bridge and South Street, and was theoretically designed to ease congestion—but some local residents say that hasn't been the case, especially given the fact that there's currently no sidewalk on the west side of Clinton between Grand and Broome, due to ongoing construction.

Community members interrupted the planned remarks at several points, stating that the DOT team has not been working with residents, and that crashes seem to have increased since the protected lane was put in.

“I’m concerned about this neighborhood getting too congested," a resident who identified herself as Julie told Gothamist. "There was an accident just the other day down here on [Clinton Street]. I’ve seen any number of people on bicycles and pedestrians weaving around each other. Sometimes it’s the pedestrians’ fault and they shouldn’t be going; sometimes it’s the bicyclist’s fault, because they go very quickly and don’t slow down.”

They also said the DOT promised a mid-block pedestrian crosswalk on Clinton Street, but nothing has happened. Trottenberg confirmed that the agency is committed to implementing that crosswalk, but have yet to work out the details of engineering. (DOT has not responded to a request for a more specific time frame.)

Council Member Helen Rosenthal, who represents the Upper West Side, said that there have been similar concerns in her district, and that they are "making every effort to make sure that the pedestrians are safe, and that bicyclists know the rules. We are all being mindful of the complexity of putting down a bike lane and how it impacts pedestrians, particularly seniors...it's very complicated."

Striped bike lanes were installed at Sixth Avenue from 8th Street to 59th Street in 1977, though they were later removed north of 42nd Street in favor of a wider sidewalk. They were briefly installed in 1980 under Mayor Ed Koch, but torn out in short order when, according to Streetsblog, "Governor Hugh Carey disparaged them to President Jimmy Carter."

The representatives present admitted that new bike lanes are always accompanied by an adjustment period. But as Councilman Ben Kallos pointed out, the Ninth Avenue bike lane [PDF] resulted in a 43 percent decrease in collisions since its implementation in 2007.

But that statistic was not particularly comforting to the community members present, who demanded to know "who's going to take responsibility when someone is hurt, seriously injured, or killed."

"Their blood is on your hands," shouted one resident.