A Local Law to amend the New York city charter, in relation to early voting in municipal elections. 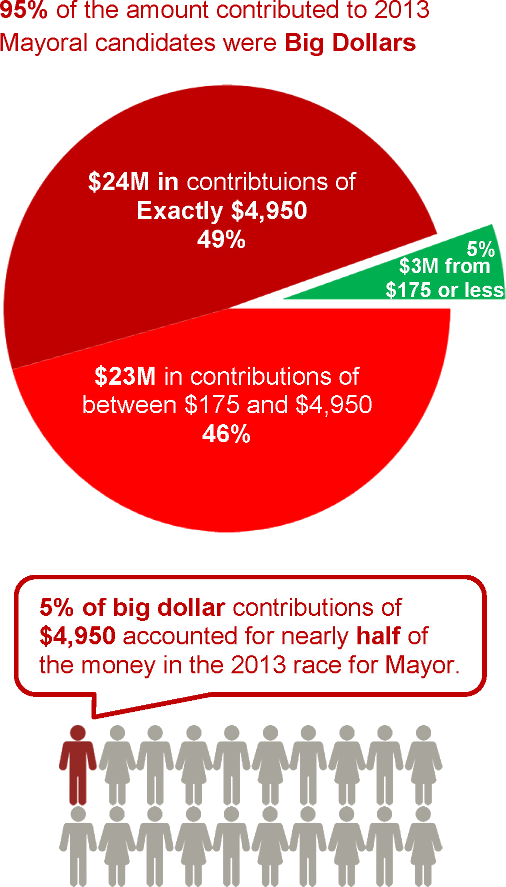 New York City’s campaign finance system matches the first $175 of contributions from residents by 6 to 1 and gives participating candidates a partial public matching grant of up to 55% of the spending limit in competitive races. This leaves more than 1/3 of the funds outstanding between the public matching grant and the spending limit, which must be reached to be competitive. The “big dollar gap” for Mayor is $2.5 million.

Introduction 1130-A by Council Members Kallos, Lander, and Cabrera, increases the public matching grant from an arbitrary partial match of 55% to a full match. Every small dollar raised from city residents would be matched 6 to 1. Candidates could still raise contributions of $4,950 for Mayor, but would be incentivized to seek small donations from many more residents by matching every small dollar.

This bill would amend the New York city charter to provide for an alternative method for candidates for the offices of mayor, comptroller, public advocate, borough president and member of the city council to get onto the ballot by allowing such candidates to get onto the ballot by raising the threshold amount of funding to qualify for participation in the campaign finance board’s small dollar matching program.

Introduction 1091-2016: Consolidating Environmental Control Board (ECB) into the Office of Administrative Trials and Hearings (OATH)

This bill would require the City Council to set forth rules prohibiting Council Members from earning certain outside income and would make the position of Council Member full-time. The provisions of this bill and any rules promulgated pursuant to this bill would not apply to any Council Member who has engaged in another occupation, profession or employment during the current Council session, who intends to continue to engage in such occupation, profession or employment for the remainder of such session, and who submits a letter to the Speaker of the Council by March 1, 2016 describing such engagement and intention.

Introduction 812-2015: Require ECB Include Certain Information in Notices of Violation

This bill would require city agencies that issue notices of violation that are returnable to the Environmental Control Board for adjudication to, where the alleged violation occurred in or on a building or lot, include the borough, block and lot number and building identification number, as applicable, of the building or lot. Finally, the bill provides that a notice of violation is still enforceable even if it does not include the required identifying information.

This bill would require the New York City Board of Elections to provide a secure website and mobile application that would allow users to (1) track the status of their absentee application and ballot; (2) view their registration status; (3) view the party for which they are a registered member; (4) view the federal, state, and local election districts in which they reside; (5) know whether they are required to bring any form of identification to vote; (6) view which elections held over the previous four calendar years for which they were registered to vote and whether they voted; (7) view the address at which they were previously registered to vote; (8) provide the option to receive alerts, including when there is a change in their registration status; (9) providing access to existing resources including (a) registering to vote, (b) updating registration information, (c) viewing sample ballots, (d) polling place locations, (e) voting hours, (f) signing up as a poll workers, and (g) viewing the voter guide.

Former Speakers used to reward Council Member allies with payments in lieu of compensation, or “lulus,” a practice that the Daily News called “legal bribery.” This resolution bans it from the City Council.