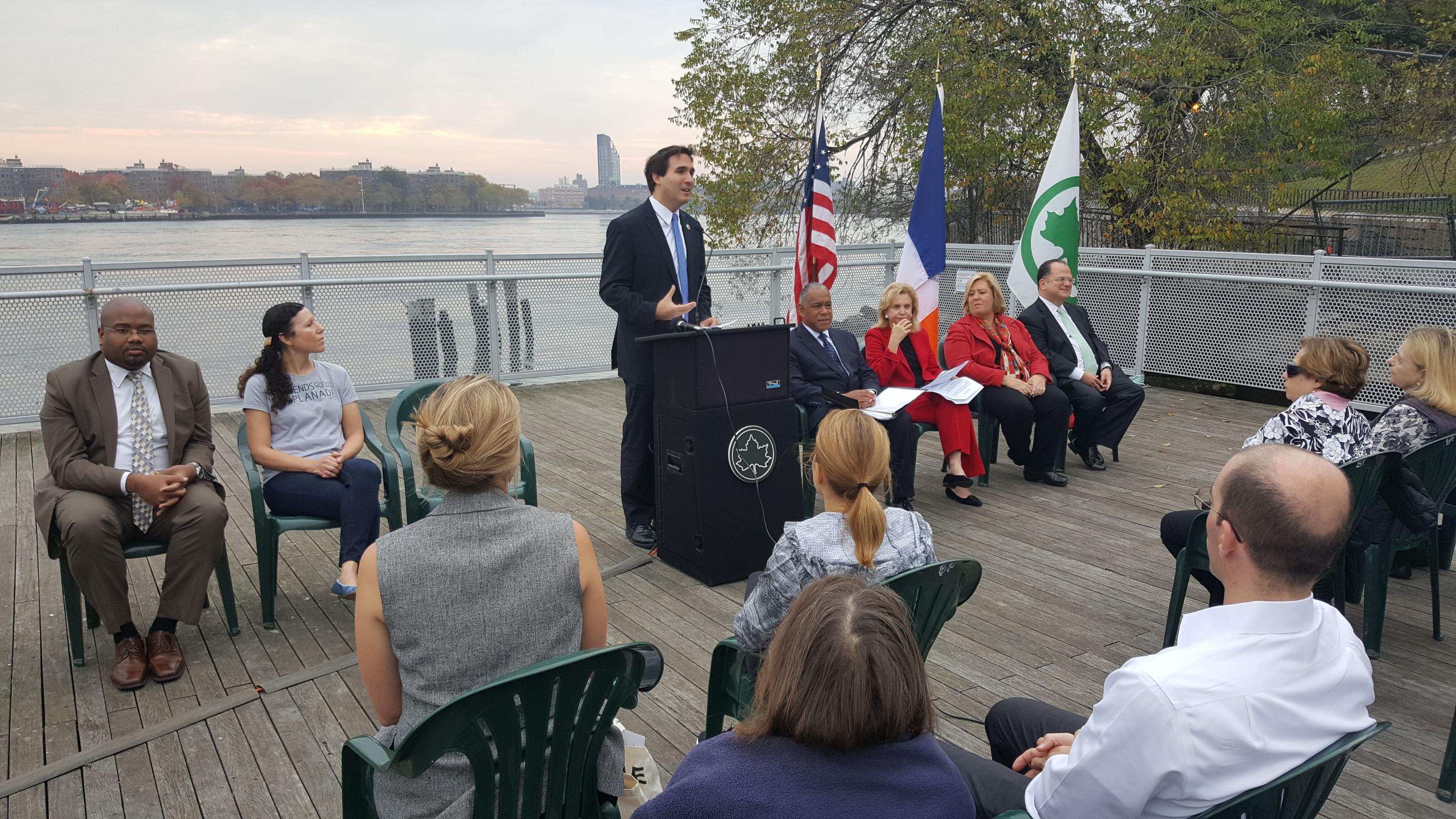 In 2014, Council Member Ben Kallos, State Senator José Serrano, and Assembly Member Robert Rodriguez advocated in a letter for city agencies to reinvigorate underutilized and deteriorating portions of the East River Esplanade, in which the 90thStreet Pier was identified. By 2015, Council Member Kallos in collaboration with Friends of the East River Esplanade, led by Jennifer Ratner, was advocating to specifically open the 90th Street Pier. In response to the requests, in the summer of 2016, the Department of Transportation turned over the 90th Street Pier to the New York City Parks Department for use as a public park.

The 90th Street Pier will be re-activated as a ferry stop, connecting residents to Soundview, 60thStreet, 34th Street and Wall Street through East River Ferry service in 2018. This makes this park all the more essential as more residents will be using it as they wait for ferries. 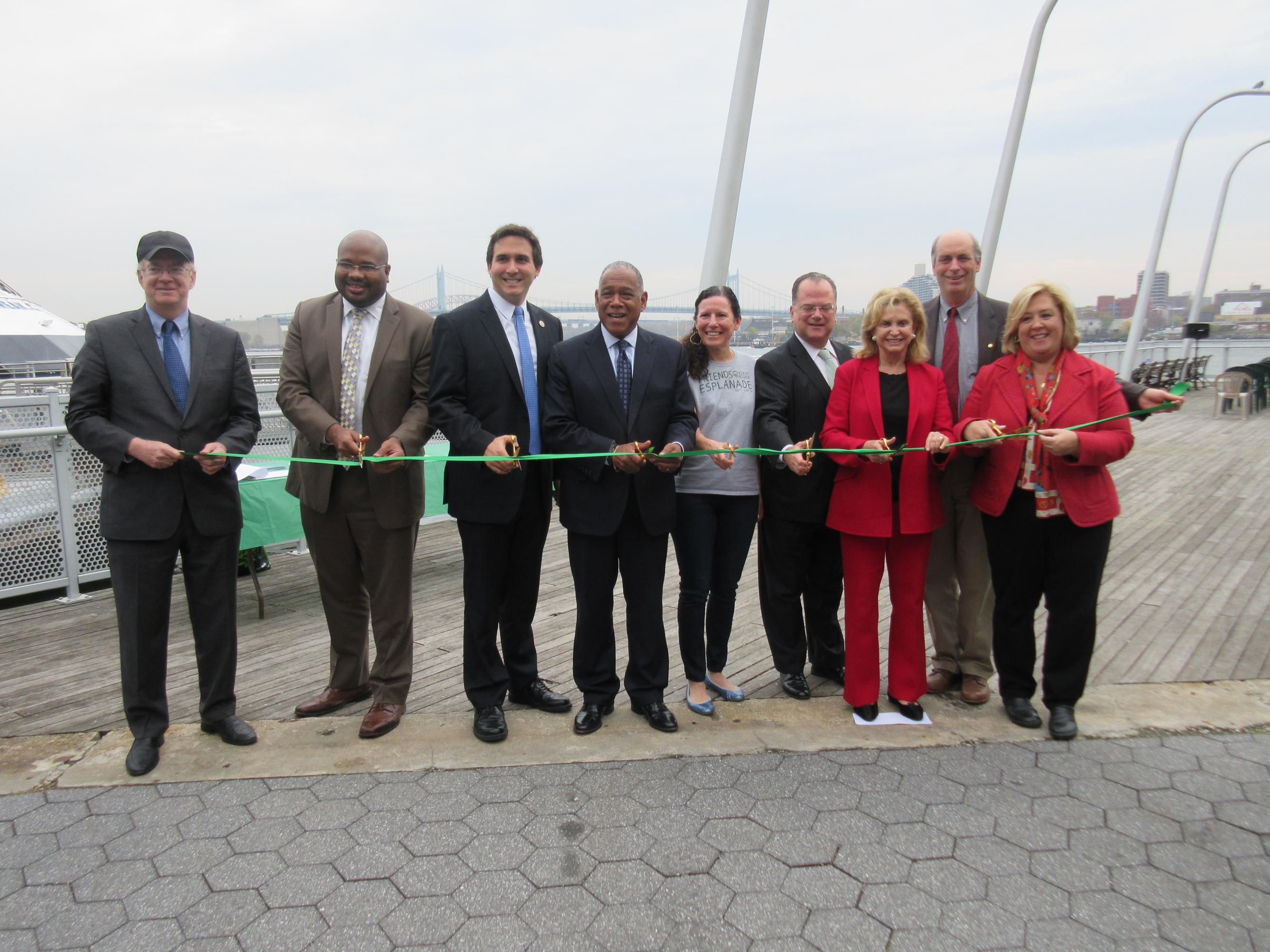 Since elected Council Member Kallos has secured more than $53 Million to rebuild the East River Esplanade, serving as Co-Chair of the East River Esplanade Taskforce with Congress Member Carolyn Maloney. More than $41 million from the City budget with $35 million allocated by Mayor de Blasio and $6 million from City Council, $10 million through a partnership with Rockefeller University and Hospital for Special Surgery (HSS) to rebuild and care for the Esplanade in perpetuity, and an additional $2 million in Council Member Item Funding

The Upper East Side’s Council District 5 ranks in the fourth lowest in the city for park and playground acres per 1,000 residents, according to the 2015 Open Space Index of New Yorkers for Parks. CIVITAS has focused on “Reimaging the Waterfront: Manhattan’s East River Esplanade” with funding in part from Council Member Ben Kallos.

“No more having to peer through bars to see our beautiful waterways at the 90th Street pier thanks to our new park. I am committed to examining every inch of the East Side to find more park space that residents can use year round,” said Council Member Ben Kallos, Co-Chair of the East River Esplanade Taskforce. “Thank you to Congress Member Maloney for her leadership, State Senator Serrano and Assembly Member Rodriguez for their partnership, the Friends of the East River Esplanade for their advocacy and collaboration, the Department of Transportation for gifting this pier, and the New York City Parks Department for opening this pier as a public park.”

“New Yorkers and visitors look to NYC Parks’ nearly 30,000 acres of parkland and 150 miles of shoreline to serve as their porches, backyards, and as gathering spaces for all types of mental respite and physical activity,” said Commissioner Silver. “Opening Pier 90 is just one of the ways we are working to revitalize the East River waterfront from 36th Street all the way uptown to 125th Street so to provide greater public access, thanks to funding from the Mayor, City Council and Council Member Ben Kallos, and support from many others.”

“In this city, every inch of open space is precious,” said Congresswoman Carolyn B. Maloney (NY-12). “As Co-Chair of the East River Esplanade Task Force, I am thrilled that the 90th street pier is finally open to the public, giving residents and visitors access to more than 3,000 feet of park space along the Esplanade. The new ferry stop will provide a much needed connection to the Bronx as well as several areas along the east side. I want to thank Councilmember Kallos, Friends of the East River Esplanade, and everyone else who had a hand in making this happen.”

"On the Upper East Side, parks and open spaces are few and far between. So it’s a great day when we get to introduce a brand new public park as part of the growing East River Esplanade. The 90th Street Pier is a great example of the good things that can happen when elected officials, city agencies, and community activists work together to realize a vision of how our community can be improved. Thank you to Council Member Kallos, Friends of the East River Esplanade, and all the others whose hard work made this possible," said State Senator Liz Krueger.

"Access to our beautiful waterfront is vitally important to our community's health - both physically and mentally, so I am thrilled to know that the 90th street pier will now be used to its full potential. Many thanks to the New York Parks Department for helping to provide East Harlem and the Upper East Side with this much-needed recreational waterfront area. I would also like to thank Council Member Kallos, Congress Member Maloney, and Assembly Member Rodriguez for joining me in advocating for this beautiful and underused space, “said New York State Senator José M. Serrano.

"I am thrilled to join the NYC Parks Department Commissioner Silver and Council Member Ben Kallos for the opening of Pier 90, an undervalued gem of open space in our community, up until now. I look forward seeing all the different ways our neighbors will enjoy the pier," said Assembly Member Rebecca Seawright.

“The opening of Pier 90 marks the beginning of a transformational change to Northern Manhattan’s waterfront.   We will build on this success by continuing our efforts to secure funding to reconstruct Pier 107 and revitalize the East River Esplanade from 96th Street to 125th Street.  The banks of the East River are essential cultural and economic resources that our communities deserve to see fully restored, said Assembly Member Robert J. Rodriguez.

“The opening of the 90th Street Pier marks a new page in New York City’s history books,” said Manhattan Borough Commissioner Luis Sanchez. “Not only will New Yorkers and tourists be able to enjoy more park land, but everyone will also be able to travel about the city more efficiently with the opening of the new ferry stop, connecting residents to the Bronx and to several neighborhoods in Manhattan.”

“Esplanade Friends is proud and excited that our persistence has paid off. The Parks Department, DOT and elected officials heard the community's voice and acted--thank you! Opening Pier90 lets people enjoy the amazing views of the East River, and we are thrilled that it gives us space to provide music, food and other programming for people now and moving forward,” said Jennifer Ratner President of the Friends of the East River Esplanade.

“CIVITAS congratulates our elected officials and Friends of the East River Esplanade upon this momentous occasion,” said Jameson Mitchell Executive Director of CIVITAS. “The opening of the park at the 90thStreet Pier is a testament to their hard work and advocacy, and will provide much-needed open space and waterfront access to the community. This marks an important step in the reimagining of the full East River Esplanade.”

“Waterfront Alliance hails new public access to the East River at the 90th Street Pier, linking Upper East Side and East Harlem residents with the many transportation, education, and recreation benefits the waters that surround us afford. We congratulate Council Member Kallos, NYC Parks, and the numerous elected officials, public agencies, and community advocates who worked to return this vital node of the East River Esplanade to public use – from ferry service, to environmental education, to passive recreation, there’s something for everyone to celebrate,” said Roland Lewis President & CEO of Waterfront Alliance.