This event is part of ongoing partnerships with elected officials across the City to host popup IDNYC enrollment sites and encourage residents to sign up for the card. The IDNYC card is an accessible and secure document that enables residents to access all City buildings, such as schools, and is accepted as a form of identification for accessing numerous City programs and services. IDNYC also provides a dynamic series of benefits to cardholders, including a free one year membership at many of the City's leading museums, zoos, concert halls, and botanical gardens and access to discounts on groceries, and medicine. In addition, the card can be presented as proof of identification for interacting with the police and is an accepted form of identification for opening a banking account at 12 banks and credit unions with more than 70 branches across the City.

“I am excited to become one of the almost 1 million IDNYC cardholders and I am proud to do it in my district on Roosevelt Island,” said Council Member Ben Kallos.” Congratulations to Mayor’s Office of Immigrant Affairs and the Mayor for making IDNYC a success in such a short period time. I invite all Roosevelt Island residents to sign up and get the card.”

“We are proud to partner with the Carter Burden Center for the Aging to bring an IDNYC PopUp enrollment center to Roosevelt Island for the very first time. To date, more than 100 Pop Up enrollment centers have brought IDNYC to communities across the five boroughs. These Pop Up sites bring this important government program directly to New York City’s many diverse neighborhoods and communities,” said Commissioner Nisha Agarwal of the Mayor’s Office of Immigrant Affairs.

“IDNYC is an example of government at its best,” said Manhattan Borough President Gale A. Brewer. “It solves a real problem for some city residents, while creating great benefits and perks for all. I encourage Roosevelt Island residents to take advantage of this convenient pop-up to sign up for IDNYC right in their neighborhood.”

“I am thrilled that the residents of Roosevelt Island will now have the opportunity to get their IDNYC cards right here in the community. I would encourage anyone who is interested in the IDNYC program, which includes discounts at major retailers and free membership to some of New York’s greatest cultural institutions, to take advantage of the IDNYC pop-up at the Roosevelt Island Senior Center. I’m grateful that Mayor de Blasio is bringing this program to Roosevelt Island, “said Congressional Representative Carolyn B. Maloney.

"Finally, Roosevelt Island now has access to a IDNYC "pop-up" enrollment site close to home! New York City Identification Cards are an excellent way for members of the city, to take advantage of the benefits available to them no matter what their immigration status may be. Many thanks to my fellow Roosevelt Island elected officials for coming together to push for such an important opportunity. I encourage all residents to make an appointment, and sign up for their very own identification card," said Senator José M. Serrano.

“I am thrilled to once again partner with Mayor’s Office of Immigrant Affairs to bring IDNYC to my district, this time on Roosevelt Island. It takes remarkable people with great vision to bring about something that 8 million people can identify with, free of charge and just a bus, tram or a walk away,” said Assembly Member Rebecca A. Seawright. “This program is not just about having an identification card, but about opening up doors to so many incredible institutions in New York City and embarking on a cultural exploration. What better place than Roosevelt Island, a neighborhood as diverse as it is inclusive to people of all backgrounds, to hold the next IDNYC pop up enrollment site.”

“The Roosevelt Island Senior Center, a Program of the Carter Burden Center for the Aging, is thrilled to serve as a host site for IDNYC enrollment, helping to open the door to this program for all members of the Roosevelt Island Community,” said Lisa Fernandez, Director, Roosevelt Island Senior Center. “At Carter Burden, we are committed to promoting the wellbeing of New Yorkers, aged sixty and over, through a full spectrum of services, advocacy and volunteer programs. We believe IDNYC is an invaluable service for all New Yorkers, especially the senior community we serve. As reported, seniors have used the card more than any other group to access the wonderful benefits of memberships and discounts offered. The IDNYC Card connects New York Residents of all ages to cultural institutions, services and programs they may not have been aware of or able to afford. The card is also a broadly accepted form of identification, making identification easily obtainable is an important achievement.”

“RIOC is pleased to welcome IDNYC to Roosevelt Island and thankful to our elected officials for making it happen. It is important for all NYC residents to have access to the benefits and services to which they are entitled. This week-long outreach effort will give the Roosevelt Island community a convenient opportunity to take advantage of the IDNYC program,” said Acting President & CEO/General Counsel, Susan Rosenthal. Since its launch in January 2015, IDNYC has grown to include more than 900,000 unique cardholders. Thanks to the leadership of Mayor Bill de Blasio and City Council Speaker Melissa Mark-Viverito, IDNYC benefits every city resident, including the most vulnerable communities—the homeless, youth, the elderly, undocumented immigrants, the formerly incarcerated and others who may have difficulty obtaining other government-issued ID. To learn more or to make an appointment to apply for their IDNYC card, all local residents can 311 in the language that they speak or go online at nyc.gov/idnyc.

Watch video of the Press Conference: 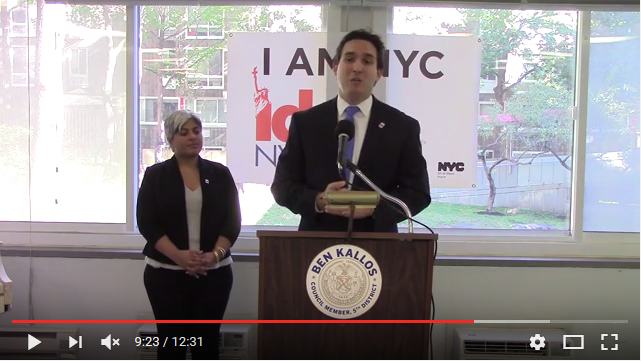