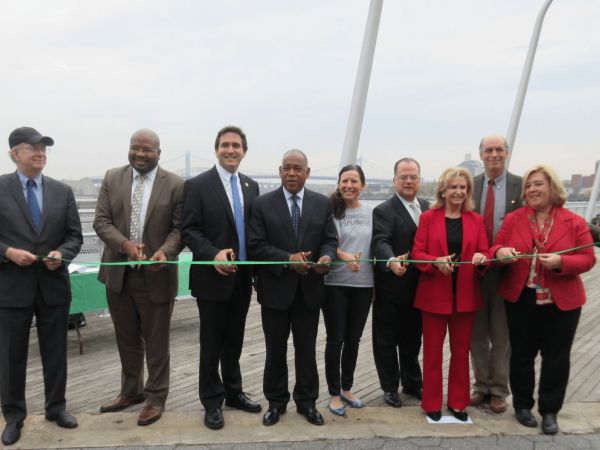 UPPER EAST SIDE, NY — Upper East Side politicians and park advocates gathered at the 90th Street Pier Thursday morning to celebrate the opening of the neighborhood's newest green space.

The pier, which Upper East Side residents were barred from entering, will serve as a stop on the East River Ferry and will add 3,000 feet of park space to a neighborhood in need of green spaces, according to a press release. The pier will begin running ferry service in 2018, but the park is now open for public use.

A 2015 study conducted by New Yorkers for Parks found that City Council District 5 — which covers much of the Upper East Side — was made up of just 3 percent parkland compared to a citywide average of 19 percent. The study ranked District 5 as the fifth worst in the city in terms of acres of parks and playground per 1,000 residents with a meagre 0.2 acres.

“No more having to peer through bars to see our beautiful waterways at the 90th Street pier thanks to our new park. I am committed to examining every inch of the East Side to find more park space that residents can use year round,” Council Member Ben Kallos said in a statement.

Funding for the new park came from money acquired to restore and improve the East River Esplanade, according to a press release. The pier was once owned by the Department of Transportation but neighborhood representatives began lobbying to include it in the plans for the restored East River Esplanade in 2014. During the summer of 2016, the DOT turned the pier over to the Parks Department, according to a press release.

"Esplanade Friends is proud and excited that our persistence has paid off. The Parks Department, DOT and elected officials heard the community's voice and acted--thank you!" Jennifer Ratner, president of the Friends of the East River Esplanade, said in a statement. "Opening Pier90 lets people enjoy the amazing views of the East River, and we are thrilled that it gives us space to provide music, food and other programming for people now and moving forward."