UPPER EAST SIDE, NY — The pandemic has thrown a wrench into many retailers' plans, but the Upper East Side's most hotly anticipated new business is still on track to arrive next year.

Trader Joe's is working toward a late 2021 opening in the expansive, landmarked retail space under the Queensboro Bridge, a person familiar with the process told Patch this week.

Patch first reported in February that the supermarket intended to open up in the space, which is known as Bridgemarket, but the famously tight-lipped company has been largely silent about its plans since then.

The source, who requested anonymity because the process is still ongoing, said Trader Joe's had cleared most procedural hurdles, including getting the green light from the city's Landmarks Preservation Commission in February to alter the landmarked space by adding signage and building a loading bay, among other changes.

The supermarket, which enjoys a cult following for its quirky products and cheap prices, currently has nine Manhattan locations, but none on the Upper East Side.

Now, Trader Joe's is outfitting the space in hopes of finishing up work late next year. Ben Kallos, a City Council member who represents the Upper East Side, told Patch that the supermarket is preparing to open only after years of behind-the-scenes wrangling. 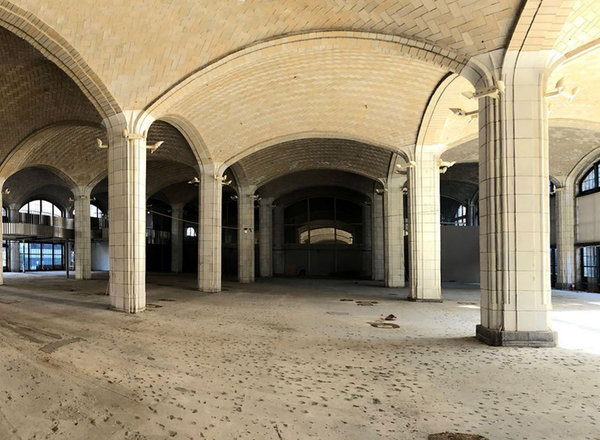 The Bridgemarket space as it appeared during the several years in which it sat empty starting in 2015. (Landmarks and Preservation Commission)

In 2015, the Food Emporium known as Manhattan's "most beautiful supermarket" closed after nearly 20 years in the Bridgemarket space, which features vaulted, tiled ceilings designed by Rafael Guastavino, famed for building the old City Hall subway station.

The craft store Michael's put together an early proposal to move into the space, but plans fell through after getting a cool reception from the landmarks commission.

Adding to the urgency was the fact that the Upper East Side had lost multiple supermarkets in recent years, including two Gristedes locations, a D'Agostino's and the Food Emporium itself. Eventually, the front-runners were narrowed down to Trader Joe's or the public market, which would have been operated by EDC with a community partner, Kallos said. 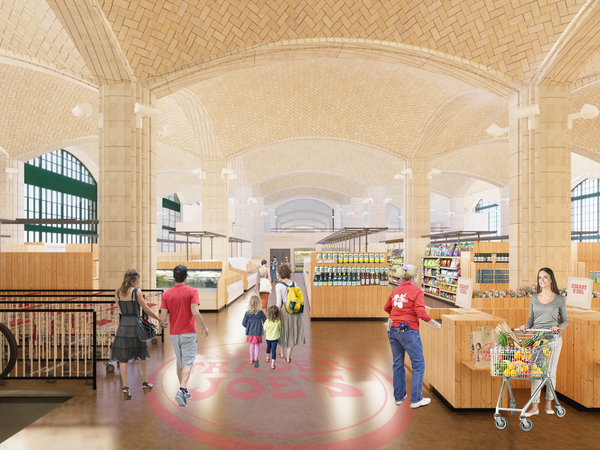 A rendering of the new Trader Joe's supermarket currently being constructed under the Queensboro Bridge. (Landmarks and Preservation Commission)

After presenting the two options to neighborhood groups including the East River 50s Alliance and Sutton Area Community, Kallos said that residents' preference was clear.

"What I will say is, people love Trader Joe's," Kallos said.

Trader Joe's will be committing to the space through June 2026, with an option to renew until 2036, according to a copy of the lease which was shared with Patch.

The Bridgemarket space is a unique landmark because the actual store's interiors — which were not part of the bridge's original design — are not protected by landmarks status. Instead, protections are reserved for the cavernous, "cathedral-like" feel of the space. 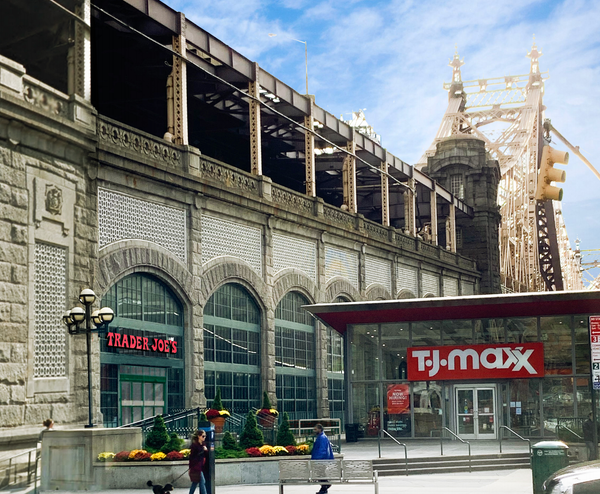 A rendering of the 59th Street entrance to the new Trader Joe's supermarket under the Queensboro Bridge. (Landmarks and Preservation Commission)

Architects hired by Trader Joe's told Community Board 8's landmarks committee earlier this year that the company will not need to do much major construction because of the space's previous use as a supermarket.

Kallos, who will give up his current seat in 2022 due to term limits and is running for Manhattan Borough President, said he expects the market to be up and running before he leaves office.

"I'm hopeful to get a chance to cut a ribbon on a Trader Joe's in the district while I am still the councilmember," he said.