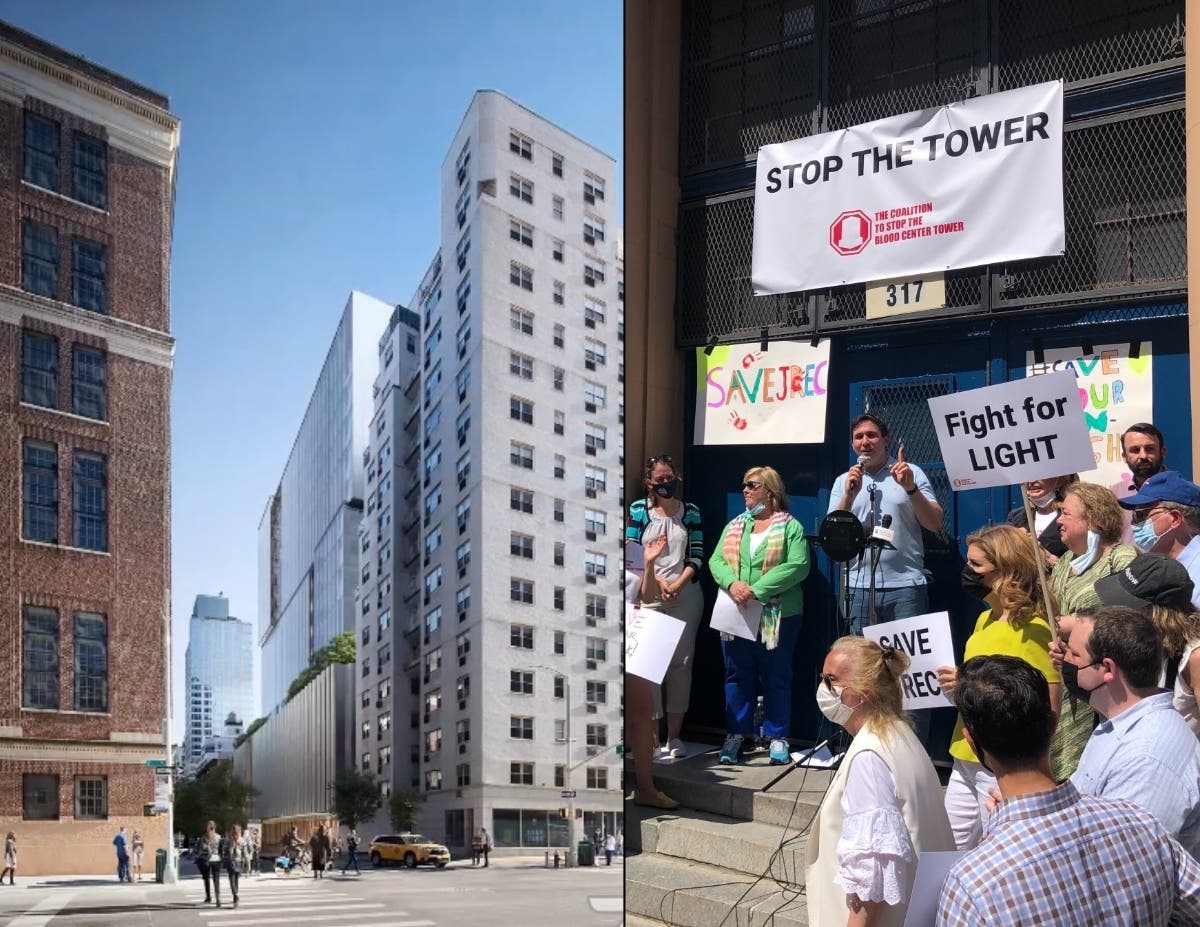 UPPER EAST SIDE, NY — The developers behind the New York Blood Center's Upper East Side rezoning unveiled a new set of concessions during a seven-hour City Council hearing on Wednesday, though opposition remained firm as the project heads toward a final vote.

Most significantly, the proposed 334-foot tower on East 67th Street will now be cut down by 58 feet to a new height of 276 feet. The reduction, mostly affecting mechanical floors rather than research lab space, will reduce the amount of shadows cast on adjacent St. Catherine's Park, which has been a focal point for opponents of the development.

Leaders of the nonprofit blood bank reiterated the argument they have made for months: that their three-story, 91-year-old headquarters is woefully outdated and limits their research capacity, and that the sparkling new tower would boost research into life-saving medicine as well as the city's life-sciences industry.

"We are currently out of space," Blood Center President and CEO Christopher Hillyer told members of the Council's zoning committee on Wednesday.

Neighborhood opponents, led by East Side Councilmember Ben Kallos, laid out their own list of objections, centered around the unusual mid-block rezoning, the impact of construction on the nearby Julia Richman Education Complex, and the fact that the Blood Center will only occupy the bottom third of the building — with the remaining space being leased out to private companies.

The development team, led by Boston-based company Longfellow Real Estate Partners, announced other, smaller concessions on Wednesday in an effort to win the Council's approval, like funding improvements to St. Catherine's Park and adding soundproofing to the adjacent school to mitigate construction noise.

The Blood Center is seeking to knock down its aging, three-story brick headquarters on East 67th Street (left) and replace it with the 334-foot-tall tower (right), which would require rezoning the block to allow for taller, denser construction. (Google Maps/Longfellow Real Estate Partners)

But those measures stopped well short of the main demand being advanced by opponents: that the Blood Center withdraw its proposed rezoning, and instead construct a far smaller building on the same site that would stay within the current zoning — or else, build on an entirely different site elsewhere in the city.

"We simply cannot accept this radical rezoning in a midblock residential neighborhood," said State Sen. Liz Krueger, one of several East Side officials who also joined the hearing to express opposition.

Hillyer countered that the Blood Center spent 20 years considering other sites before concluding that its current block was the only suitable location for an expansion. As for building a smaller headquarters within the zoning code, Hillyer said a shorter, 75-foot building would be far costlier than the tower, with an estimated $463 million price tag that the Blood Center could not afford.

"This is the smallest building that we can come up with that is financially viable," Hillyer said of the 276-foot proposal.

Blood Center CEO Christopher Hillyer devoted time during Wednesday's hearing to rebutting what he called false claims that have been circulating about the Blood Center rezoning. (New York City Council)

Testimony from the public was varied, with supporters including the construction unions backing the project for the jobs it will create and some Upper East Side residents who said they supported the Blood Center's work. Those speaking up against it, meanwhile, included several members of Community Board 8, which voted overwhelmingly to oppose the project; Manhattan Borough President Gale Brewer; and District 5 City Council nominee Julie Menin.

What will ultimately matter is whether Kallos's Council colleagues defer to his wishes and vote against it in mid-November, or defy his preferences to support the project — a distinct possibility, according to some reports.

Wednesday's hearing offered few clues. The only other Council members who spoke at length were Manhattan member Keith Powers and Brooklyn lawmaker Antonio Reynoso, whose questions to the Blood Center team offered little indication of how they will ultimately vote.

Reynoso, though, suggested a possible path forward through negotiation.

"I hope that you and Councilmember Kallos can sit more," he told the Blood Center team, "and get to a place where we can all be happy."