NY1 City Scaffolding Permits Up By More than a Third In 2.5 Years by MICHAEL HERZENBERG

NY1
City Scaffolding Permits Up By More than a Third In 2.5 Years
MICHAEL HERZENBERG
https://www.ny1.com/nyc/all-boroughs/news/2020/09/18/city-scaffolding-permits-u…

“I think it’s a problem all over,” said one New Yorker.

“It makes the housing look ugly, very ugly,” said another.

They’re often littered with trash. Some provide makeshift housing for people like Keisha Johnson. She lives under scaffolding off First Avenue.

“I’ve used the scaffold as a sort of a shelter,” she said.

(NOTE: As of Thursday evening, the number of sheds listed on the city's tracker dropped significantly, to 9,835. The DOB had issued a statement to NY1 Thursday afternoon saying there were 10,788 sidewalk sheds, and a screenshot of the map from September 14, seen below, listed the number at 10,745.) 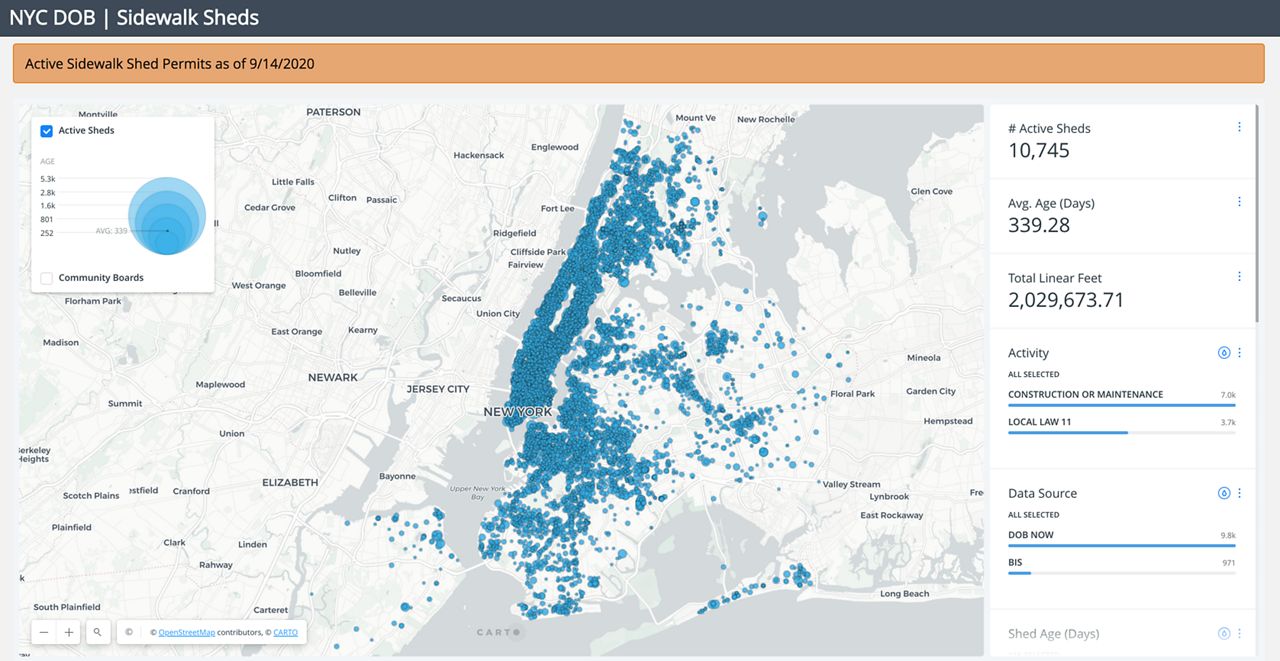 About two out of every three sheds are erected to protect pedestrians from construction and building maintenance, but installations of sheds to shield passersby from crumbling facades are increasing at a slightly quicker pace.

One factor: falling debris from a 17-story Midtown building killed architect Erica Tishman last December. The city had cited the owner eight months earlier for failing to maintain the facade.

After Tishman's death, the city hired additional inspectors, increased fines and in January, mandated that another 220 buildings put up sheds.

“That was a reaction to someone losing their life, and in that regard, I think we should pull out every measure that we can to make people safe," said Brooklyn City Councilman Robert Cornegy Jr., "but there’s another measure that can be even more effective and efficient.”

The Democrat sponsored legislation requiring the city to explore allowing building owners to use drones to complete required facade inspections. Quicker inspections could reduce the need for sidewalk sheds. His bill is awaiting the mayor's approval.

“We actually need building owners and landlords to take care of their buildings," said Manhattan City Councilman Ben Kallos. "Right now, what happens is, they look at the side of the building, they see a loose brick and then just they put up the scaffolding, and it stays there for years.”

For example, a sidewalk shed on 115th Street in East Harlem has been up for more than 11 years.

“They haven’t done nothing. It’s still like now the same,” a neighbor told NY1.

The city, though, started coming after building owners who fail to make necessary repairs and leave up scaffolding, filing criminal charges against seven owners with scaffolding in place for more than a decade.

And as for that scaffolding off First Avenue? The permit was issued just before the pandemic, and its “roof” provides more than a home for Johnson.  Four months ago, she started selling things from beneath it.

“Everything. Shoes, clothes, household items. You name it, we have it,” said Johnson.

She even boasts an online presence.

The growing miles of scaffolding providing shelter for some and a business, too.