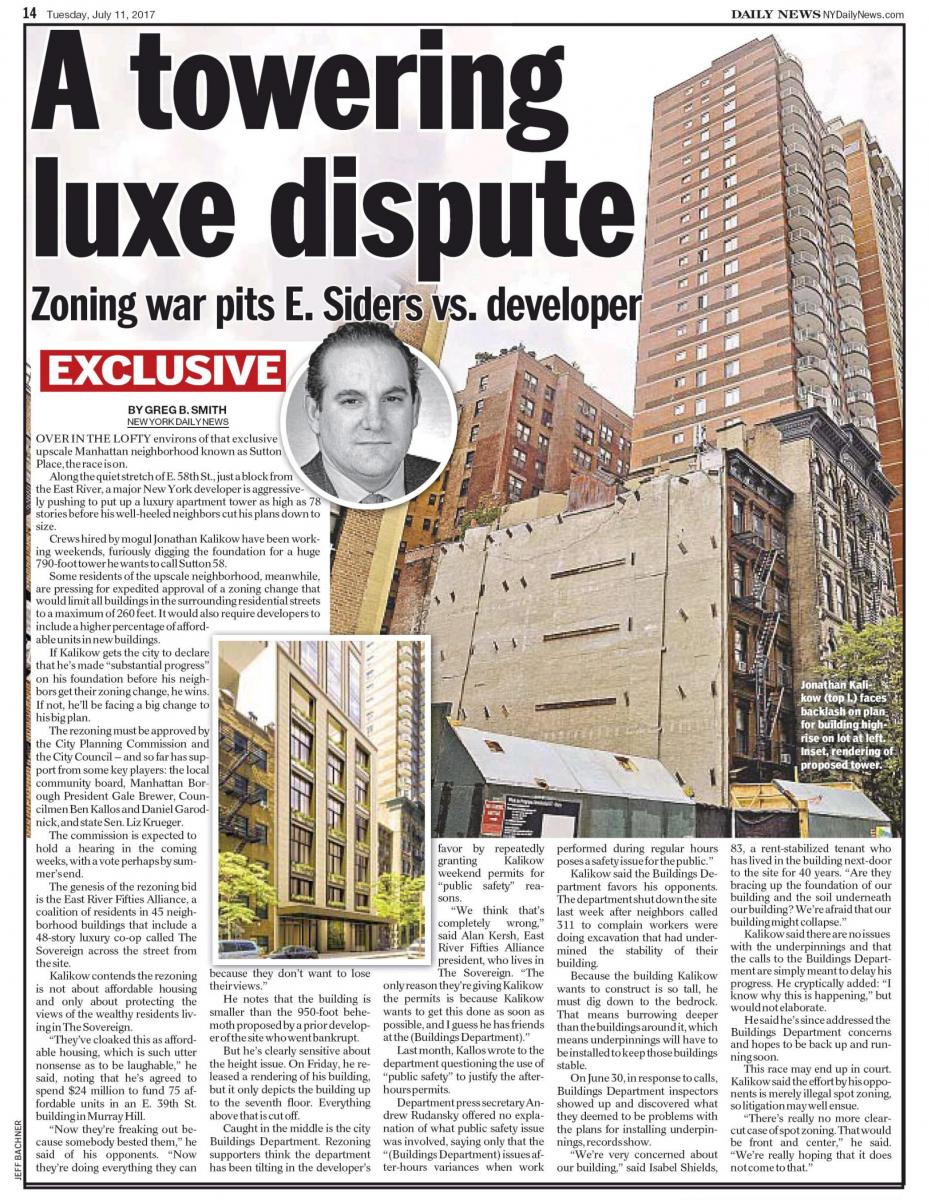 Over in the lofty environs of that exclusive upscale Manhattan neighborhood known as Sutton Place, the race is on.

Along the quiet E. 58th St., just a block from the East River, a major New York developer is aggressively pushing to put up a 78-story luxury apartment tower before his well-heeled neighbors cut his plans down to size.

Crews hired by mogul Jonathan Kalikow have been working weekends, furiously digging the foundation for a huge 790-foot tower he wants to call Sutton 58.

Some residents of the upscale neighborhood, meanwhile, are pressing for expedited approval of a zoning change that would limit all buildings in the surrounding residential streets to a maximum of 260 feet. It would also require developers to include a higher percentage of affordable units in new buildings.

If Kalikow gets the city to declare that he’s made “substantial progress” on his foundation before his neighbors get their zoning change, he wins.

If not, he’ll be facing a big change to his big plan.

The rezoning must be approved by the city Planning Commission and the City Council — and so far has support from some key players: the local community board, Manhattan Borough President Gale Brewer, Councilmembers Ben Kallos and Dan Garodnick and State Sen. Liz Krueger.

The commission is expected to hold a hearing in the coming weeks with a vote perhaps by summer’s end.

The genesis of the rezoning bid is the East River Fifties Alliance, a coalition of residents in 45 neighborhood buildings that include a 48-story luxury co-op called The Sovereign across the street from the site.

Kalikow contends the rezoning is definitely not about affordable housing and only about protecting the views of the wealthy residents living in The Sovereign.

“They’ve cloaked this as affordable housing, which is such utter nonsense as to be laughable,” he said, noting that he’s agreed to spend $24 million to fund 75 affordable units in an East 39th St. building in nearby Murray Hill.

“Now they’re freaking out because somebody bested them,” he said of his opponents. “Now they’re doing everything they can because they don't want to lose their views.”

He notes that the building is actually smaller than the 950-foot behemoth originally proposed by a prior developer of the site who went bankrupt.

But he’s clearly sensitive about the height issue. On Friday he released a rendering of his building, but it only depicts the building up to the seventh floor. Everything above that is cut off.

Caught in the middle is the city Buildings Department. Rezoning supporters think the department has been tilting in the developer’s favor by repeatedly granting Kalikow weekend permits for “public safety” reasons.

“We think that’s completely wrong,” said Alan Kersh, Alliance president, who lives in The Sovereign. “The only reason they're giving Kalikow the permits is because Kalikow wants to get this done as soon as possible and I guess he has friends at the DOB.”

Last month, Kallos wrote to the department questioning the use of “public safety” to justify the after-hours permits. None of the work cited — including excavation and pouring concrete — “should qualify for ‘public safety,’” Kallos wrote.

DOB press secretary Andrew Rudansky offered no explanation of what public safety issue was involved, saying only that the “DOB issues After Hours Variances when work performed during regular hours poses a safety issue for the public.”

Kalikow, not surprisingly, thinks the buildings department favors his opponents. The department shut down the site last week after neighbors called 311 to complain workers were doing excavation that had undermined the stability of their building.

Because the building Kalikow wants to build is so tall, he must dig down to the bedrock. That means burrowing deeper than the buildings around it, which means underpinnings will have to be installed to keep those buildings stable.

On June 30, in response to calls, DOB inspectors showed up and discovered what they deemed to be problems with the builders’ plans for installing underpinnings, records show.

“We’re very concerned about our building,” said Isabel Shields, 83, a rent stabilized tenant who has lived in the building next door to the site for 40 years. “Are they bracing up the foundation of our building and the soil underneath our building? We're afraid that our building might collapse.”

Kalikow said there are no issues with the underpinnings and that the calls to DOB are simply meant to delay his progress. He admits “with the calls to 311, that has put a slow to things.”

He added cryptically, “I know why this is happening,” but would not elaborate. He said he’s since addressed DOB’s concerns and hopes to be back up and running soon.

In the end, this race may end up inside a courthouse. Kalikow contends the effort by his opponents is merely illegal spot zoning, so litigation may well ensue.

“There’s really no more clear cut case of spot zoning. That would be front and center,” he said. “We’re really hoping that it does not come to that.”