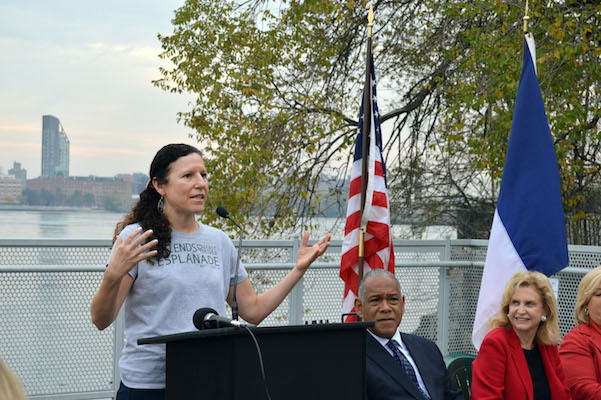 Jennifer Ratner, chair of the Friends of the East River Esplanade, speaks at the opening of the East 90th Street Pier on November 3. | JACKSON CHEN

More than 3,000 square feet of park space has been added to the Upper East Side as the East 90th Street Pier opens for year-round public use.

In past years, the pier has intermittently served as a ferry stop for trips to either Yankee Stadium or Wall Street, but it mostly remained gated off. Through persistent efforts by the Friends of the East River Esplanade, the conservancy group that manages the waterfront park, the Department of Parks and Recreation has agreed to open up the pier as a public park from 7 a.m. to dusk every day.

“Our group, the Esplanade Friends, have been working on this for so long together alongside the elected officials,” Jennifer Ratner, the founder and board chair of the conservancy, said. “Things moved along steadily but at a slower pace than I would’ve thought. Now that it’s actually happening, I’m really excited.”

Ratner and the Friends group first approached the Department of Transportation, which then had jurisdiction over the pier, two years ago. After continued correspondence with city agencies, the parks department allowed the group to hold two Sunday events during the summer. After the success of those events, the agency decided to keep the pier open through Labor Day from 10 a.m. to 2 p.m.

As of the ribbon-cutting ceremony on November 3, the pier will now be open year-round in a neighborhood that has long been considered as lacking in open space.

“As New Yorkers, we always look forward to public spaces because what they offer us,” Parks Commissioner Mitchell Silver said. “They’re not just for physical health, but they’re also for mental health, and just being on this pier, looking at the beauty, always helps us to relax.”

The opening of the East 90th Pier is one of many projects in the efforts to revitalize Manhattan’s accessible East River waterfront from East 36th to East 125th Street, according to Silver.

In terms of funding for these waterfront projects, $35 million has been secured from Mayor Bill de Blasio, $10 million from Rockefeller University, $6 million from the City Council, and an additional $2 million from Councilmember Ben Kallos.

“We are dedicated to getting every single square inch of park space that we can,” Kallos said. “Because even with this addition, this district is still going to rank amongst the bottom according to New Yorkers for Parks in terms of the Open Space Index.”

The councilmember referred to the 2013 Open Space Index study done by New Yorkers for Parks, a research group dedicated to park space in the city. In the index, Kallos’ District 5 failed to meet many standards of open space availability and the proximity to residents.

“There’s so many different places where we can have partnerships and bring more space to the Upper East Side and East Harlem communities to use together as part of one city,” Kallos added, pointing to several piers north of East 90th Street.

During periods when the pier was underused and gated off, residents would oftentimes pass and were restricted to peering in. But for Deputy Borough President Matthew Washington, the pier should’ve always been open every day of the week.

He noted that the pier didn’t belong to the parks department back then and has since stopped hopping the fence, as in his youth days. With the park now open full time, Washington focused his remarks on making sure the parks department will have the resources to maintain the open spaces throughout the city.

“Write to the mayor… write to all the elected officials to talk about the need for funding,” Washington said. “So that we can make sure this pier doesn’t have to close because it doesn’t have the right resources to make sure it stays open.” 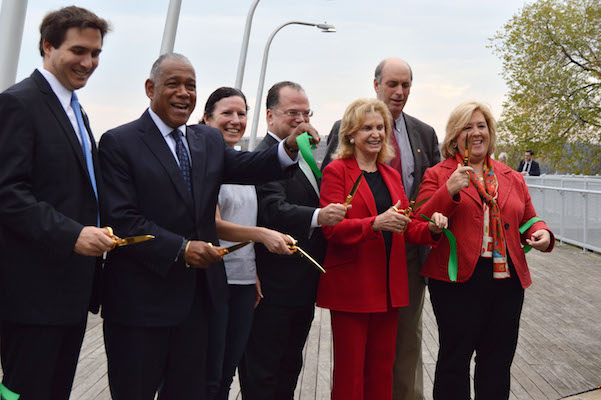 Elected officials among the crowd, like Congressmember Carolyn Maloney and Assemblymember Rebecca Seawright, and Community Board 8 members agreed that more open space on the East side was worthy of celebration due to its benefit to all city residents.

“We’re in Community Board 8, but people are here from Community Board 11 and further west,” Ratner said. “And that’s because a waterfront really does belong to the whole city.”

Once the months warms up after the coming winter, Ratner said her group would resume programming, with music and ice cream. Friends of the East River Esplanade hopes to roll out a full spring series of events in coming months.