Politicians and advocates gathered in Queens on Wednesday to denounce a multibillion-dollar plan to bring a new Amazon headquarters to New York. One city councilman called the move “an assault on our democracy”. 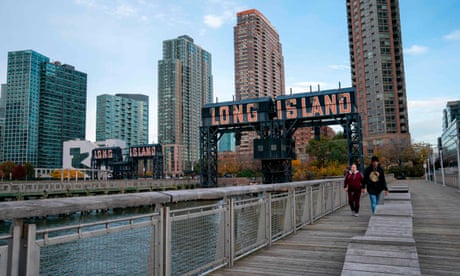 Rallying across the street from the Long Island City site where Amazon’s new campus is set to rise, opponents called the plan – which will give Amazonnearly $3bn in tax breaks and subsidies from state and city – a ripoff to taxpayers that will stress the neighborhood’s infrastructure while doing little to help local residents.

“The more we learn about this deal, the worse it gets,” said state senator Michael Gianaris, who represents the neighborhood. “This is a bad deal, and the state and the city should both be embarrassed to be stand behind this deal. They got taken, plain and simple.”

The New York state senator Michael Gianaris calls on supporters to remove the Amazon app from their phones and boycott the company. Photograph: Bebeto Matthews/AP

The Seattle-based tech company orchestrated a year-long competition between cities around the US, soliciting bids for a location to build a second headquarters. Instead of one new project it ended up announcing two major new offices, one in New York and one in Arlington, Virginia.

In return for the jobs, which Amazon says will pay an average of $150,000 a year, the company will get at least $1.5bn in cash subsidies and tax breaks from the state, and another $1.3bn in tax breaks from the city. The mayor and governor say they will come out on top, getting $9 back in revenue for every dollar spent.

Don’t be fooled by the magic numbers that they’re throwing around. This is a bunch of bull

Critics cast doubt on that claim, noting a different development project that would have produced revenue was planned for the site before Amazon came along. The land in a once-industrial neighborhood is now dotted with warehouses, taxi depots, an outdoor bar and a shuttered restaurant that was at the center of a corruption scandal for the city’s mayor.

“Don’t be fooled by the magic numbers that they’re throwing around,” said Gianaris. “This is a bunch of bull.”

Lawmakers will never get the chance to vote on the plan, since the state is routing it through an economic development agency controlled by the governor, avoiding city council approval on zoning changes that would normally be required.

Amazon has promised in a non-binding agreement to help fund a modest job training program and set aside space for a tech startup incubator. Opponents say much more would be needed to make the deal worthwhile for the city, like help for the area’s delay-plagued subways, sewer systems that often back up, overcrowded schools and scarce affordable housing.

On Wednesday, residents at the nearby Queensbridge Houses – the largest public housing project in the US – complained of heat outages, officials said.

“Today is a great day to be a real-estate broker in Long Island City,” said Jonathan Westin, head of New York Communities for Change. “Today is a horrible day to be a tenant struggling to make rent.”

The city also agreed to facilitate construction of a new helipad on the site for Amazon executives. The Manhattan city councilman Ben Kallos said the arrangement made Amazon’s chief executive, Jeff Bezos, look like a “Bond villain”.

“The governor and the mayor have decided to throw Jeff Bezos almost $3bn in subsidies and tax breaks – and throw in a helipad so he doesn’t have to take the damn 7 train,” said city councilman Jimmy Van Bramer, who represents Long Island City. “He wants this helipad so he doesn’t actually really have to spend any time in Queens.”

De Blasio defended the deal in a TV interview.

The mayor said Amazon asked for more than it got in subsidies. If the company does not come through with the promised jobs, he said, the government could recover the money.

“I get very upset when I see something that I think is a giveaway to a corporation,” he said. “We drove a hard bargain. We’re getting a whole lot more tax revenue back than anything the city or state are putting in. We’re getting a number of jobs that’s almost unimaginable …

“We’ve made clear to Amazon those jobs need to go to everyday New Yorkers.