The New York City Housing Authority faced a blistering chorus of criticism Wednesday night during a public hearing for its plan to bring in a private developer to build a mixed-income tower at one of its Upper East Side housing complexes.

For more than a year, NYCHA has been trying to sell skeptical residents at Holmes Tower and the neighboring Stanley M. Isaacs Houses on a 50-story infill project to be built by Fetner Properties, a New York-based housing developer. The development at East 92nd Street is one of two in the city being rolled out under the authority’s NextGen initiative, also referred to as NYCHA 2.0, which would allow NYCHA to strike deals with private developers like Fetner as a way of generating much-needed money for capital improvements. NYCHA stands to earn $25 million from the Holmes project. Following criticism last year that not all the money would be used to help residents at the site, the agency pledged to reserve all of that money for repairs at the existing Holmes Tower complex.

But the height of the 169-unit tower, which at 500 feet would rise well above the 25-story buildings at the public housing site and violate zoning regulations, coupled with NYCHA’s intention to avoid the city’s public land-use approval process by asking the mayor to grant an exception, have roiled residents and the local community board.

“You are putting a monstrosity there,” said Lakeesha Taylor, a mother who grew up in the Holmes Tower. “It’s not what we want. It’s not about our future. It’s about your future, and your pockets.”

But the NYCHA residents at Holmes and the Stanley Isaacs Houses say they’re being given a raw deal. While NYCHA has said the deal will give the agency $25 million to make much needed repairs at Holmes, the agency also admitted that they need much more.

One by one, NYCHA residents got up to oppose the plan. “Don’t let them build it. Don’t let them sugar coat it. You can put lipstick on a pig, but it’s still a pig,” Rose Bergin, a tenant association leader said. pic.twitter.com/WAWvZ1qvpZ 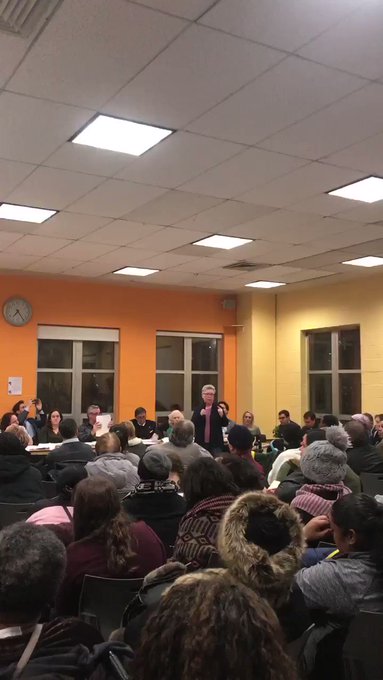 The hearing, which represented the 23rd meeting between NYCHA residents and the developer, demonstrated the difficult position that NYCHA now finds itself in as it tries to sell both residents and the public on its privatization plan. NYCHA, whose 62,000 apartments are occupied by more than 400,000 residents, is the largest public housing authority in the country. Having fallen behind in repairs to aging buildings, it has said it will need $32 billion in capital funding, only one-third of which the agency has lined up. Today Mayor Bill de Blasio joined Housing and Urban Development Secretary Ben Carson to announce the creation of a federal monitor to assume some oversight of NYCHA.

Taylor was joined by more than 150 residents and neighbors who squeezed themselves into the public hearing held at the housing complex by Community Board 8. One by one, public housing tenants railed at the plan, saying not only would the new building block some of their existing views, but they would be forced to endure years of construction that would create unhealthy and potentially hazardous conditions. As of Wednesday, NYCHA and the developer had not produced an environmental impact study, which would assess such risks.

Residents and community board members also accused NYCHA, which last June admitted to widespread mismanagement and endangering the health of its residents, of failing to negotiate the best deal for the project, questioning everything from the selection of the developer to whether $25 million was enough money for a prime slice of land in the Upper East Side. The developer and NYCHA have outlined a parcel of land that is currently being used as a playground. The developer has said that the new building, which would be comprised of 50 percent affordable units and 50 percent market-rate apartments, would ultimately create more open space for all residents.

“It’s incumbent for NYCHA to get more money,” said Adam Wald, a Community Board 8 member.

He later added: “This will set the precedent for all other NextGen projects. This needs to set a higher watermark for the rest of the city.”

More than one individual asked whether City Hall improperly selected the developer. “Folks, it can’t possibly be right. What did Mr. Fetner donate to de Blasio?" asked Andrew Garvin, a resident on 92nd Street and York Avenue,

According to a 2017 Daily News story, Harold Fetner, the president and CEO of Fetner Properties, and his family gave a total of $29,150 for de Blasio’s election campaigns and his transition committee.

For his part, Fetner defended the deal by saying that the high number of affordable units in the project leave the developer more exposed. “One half is affordable,” he said. “Those units lose money and are to be subsidized by the market-rate units.”

He added: “It’s an inordinate amount of risk to us.”

NYCHA's ability to finalize the deal on Holmes will likely affect how it proceeds with other public-private developments. Another GenNext project, located in Brooklyn’s Boerum Hill neighborhood, has also drawn opposition.

Throughout the hearing, community board members, elected officials and residents reserved especial outrage over NYCHA’s intention to ask for a mayoral zoning override. The tool, which experts said is not often used by mayors, would allow the project to bypass the ULURP process and public review.

“This is ultimately an existential threat to zoning,” said George Janes, a planning consultant who lives on the Upper East Side. “It saying that the way we regulate our land can be signed away with a waiver.”

According to Tom Angotti, professor of urban affairs and planning at Hunter College, a mayoral override represents a “slippery slope”

“But it is an avalanche if applied to development on public housing land. Public housing residents, long disenfranchised, need to have a greater say, not less, in the future of their neighborhoods,” he wrote in an email to Gothamist.

Gale Brewer, the Manhattan Borough President, and City Councilmember Ben Kallos both attended the hearing to oppose the project, and suggested that the issue may ultimately wind up in court. "I don't want to be specific but we're very serious about this project," Brewer added.

After the hearing, Gregory Morris, president and executive director of the Stanley M. Isaacs Neighborhood Center, a nonprofit at the housing complex whose services includes a community center, after-school programs and daycare, issued the following statement:

"NYCHA residents of Holmes Towers/Isaacs Houses and Members of Manhattan Community Board 8 made clear last night that they were uninformed about the Fetner project, as well as deeply concerned about its legality and potential environmental hazards. As the primary provider of social services in the development for more than 50 years, the Stanley M. Isaacs Neighborhood Center will continue to amplify the voices of public housing residents who have long been ignored and isolated. We will continue to stand with all stakeholders to ensure that this project is subject to the City's Uniform Land Use Review Process, as the preservation of public housing through private investment should never conflict with the preservation of human dignity."

On Wednesday night, after four hours of public testimony, NYCHA officials, who appeared both worn and frustrated by the outpouring of anger, stopped trying to sell the project and conceded the reality of the situation.

“We understood from the beginning that no one wants this,” said Matthew Charney, NYCHA’s director new construction. “But we are in desperate need of funds for repair.”