East Side Councilman Ben Kallos is planning to introduce a bill to cut down on light pollution by mandating that the city use light-directing fixtures when replacing streetlights.

City Council Member Ben Kallos, who represents a broad swath of Midtown East and the Upper East Side, on Wednesday introduced a bill requiring expanded disclosure on school enrollment, part of an effort to address a space crunch that has half of the city's public school students attending overcrowded schools.

Under the terms of the proposed bill, the Department of Education would make publicly available aggregated and disaggregated data on the number of applications and admissions granted for each school in the city, as well as enrollment numbers and expected open seats for the next school year. This data would be further broken down by grade level and the community school and council districts of residence for students, as well as their zip codes.

"We need to better track what schools people are applying to, how many folks are being turned away from schools, and have a better sense of where they're ending up so we can re-adjust programming," Kallos told Gothamist.

A 2014 report by the Presidential Commission on Election Administration, formed following problems with the 2012 presidential election, concluded that "no voter should have to wait more than half an hour," and that where that happens, "corrective measures should be deployed." And as research cited by the New York Times today found:

Citing the presidential commission's report, Manhattan Councilman Ben Kallos, chairman of the Council Committee on Governmental Operations, wrote, "At poll sites across the city, New Yorkers are reporting long lines. The consolidation of poll sites crammed too many election districts into mega-poll sites and left New Yorkers waiting on mega-lines. For safety, the fire code limits how many people can occupy a space and the number of voters at certain poll sites is dangerously close to those limits. We need additional, wheelchair-accessible poll sites to reduce lines and ensure a safe voting experience."

Perhaps even more troubling than technical and logistical malfunctions is poll worker misdirection, based on false understandings of law and procedure. At PS 142 in Carroll Gardens, reader Nicole Yoblick wrote:

The people working at my booth giving out forms were instructing us that we have to vote ALL democratic or ALL republican, that we could not pick and choose or the machines would reject the form when scanned. They said it had happened multiple times already...So we would not be allowed to vote for a democratic president and a republican senator. This is wrong!"

"Something went very wrong here," said Councilmember Ben Kallos, Chair of the Council Committee on Governmental Operations. "We must address the issues of mismanagement, communication failure and outside influence."

Of three proposed sites, the stakeholders claim, the playground was chosen "amid widespread resistance from the community to development that would take away the park from the children."

"The entirety of the Stakeholder Committee is not in favor [of the site], so there are a lot of questions about whether it really represents what residents chose," Paul Westrick, Kallos's Legislative Director, told Gothamist. Westrick added that although NYCHA held community engagement meetings this past February, they "were not well attended, and the public outreach they did wasn't really extensive." Because of a lack of community engagement, the stakeholders are requesting that the agency extend the proposal deadline from September 30th to November 30th.

Gothamist Don't Miss Your Chance To Go To The Top Of Woolworth Building! by Partner

Gothamist
Don't Miss Your Chance To Go To The Top Of Woolworth Building!
Partner

And looks, here are some entrants already on Instagram and Twitter! Even City Council Member Ben Kallos is taking part: 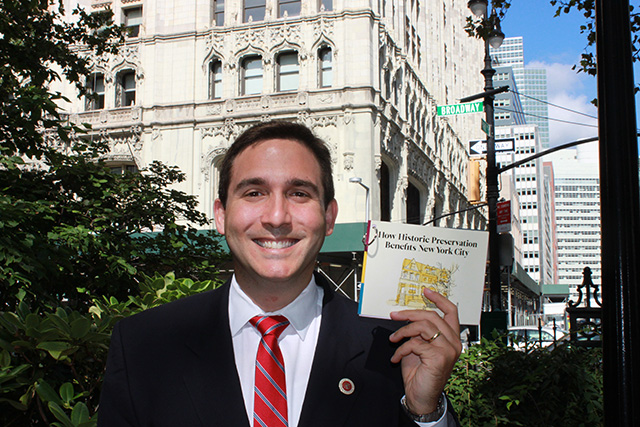 You'll find some more interesting facts about the buildings in the Historic Districts Council's slideshow "How Historic Preservation Benefits New York City," below. The slides also describe how historic preservation—as a driver of New York City's multi-billion-dollar tourism trade, a creator of good paying jobs, and an attractive option for affordable housing—is a positive force for the financial well-being of the city.

But as Councilman Ben Kallos pointed out, the Ninth Avenue bike lane [PDF] resulted in a 43 percent decrease in collisions since its implementation in 2007.

Today I went to a press conference at City Hall, for a new bill sponsored by Council Members Ben Kallos, Laurie Cumbo, and Robert Cornegy. It would expand New York's Workforce 1 job centersand website to add some new resources for parents returning to work after taking time off to raise their kids.

The bill would provide tech training, public-private partnerships with firms willing to hire returning parents, some specialized assistance polishing outdated resumes, a better website for the program, and advertising to let people know that the service exists. (The cost of these improvements will be minor, and determined during budget negotiations- the cost of Workforce 1's eighteen centers, serving 40,000+ people a year, is around $42 million, which is about 0.05% of a nearly $80 billion city budget.)

It's a little-known fact that renters who end up in housing court can find themselves on a dreaded "tenant blacklist," making it difficult to procure a NYC apartment in the future. Now, thankfully, several City Councilmembers are taking steps to kill the list once and for all, so go ahead and skip a rent payment when your landlord shuts your heat off, you deserve it.

Though the city stopped permitting housing court to identify tenants sued for eviction by their names and addresses in 2012, private companies have been able to gather that identifying information through public records, which they can then sell to landlords screening prospective renters. This is a problem, particularly because you don't have to be convicted in such a case to end up on this list—in fact, people who've been taken to court by mistake can still end up on the list.

But legislation sponsored by City Councilmembers Ben Kallos, Rory Lancman, Alan Maisel, and Mark Levine aims to curb all this by amending the city's administrative code, making it impossible for landlords to reject an applicant based on whether or not they were "a party in past or current landlord-tenant action or housing court proceeding." Landlords would still be able to screen tenants who are evicted or fail to satisfy the terms of a court order.