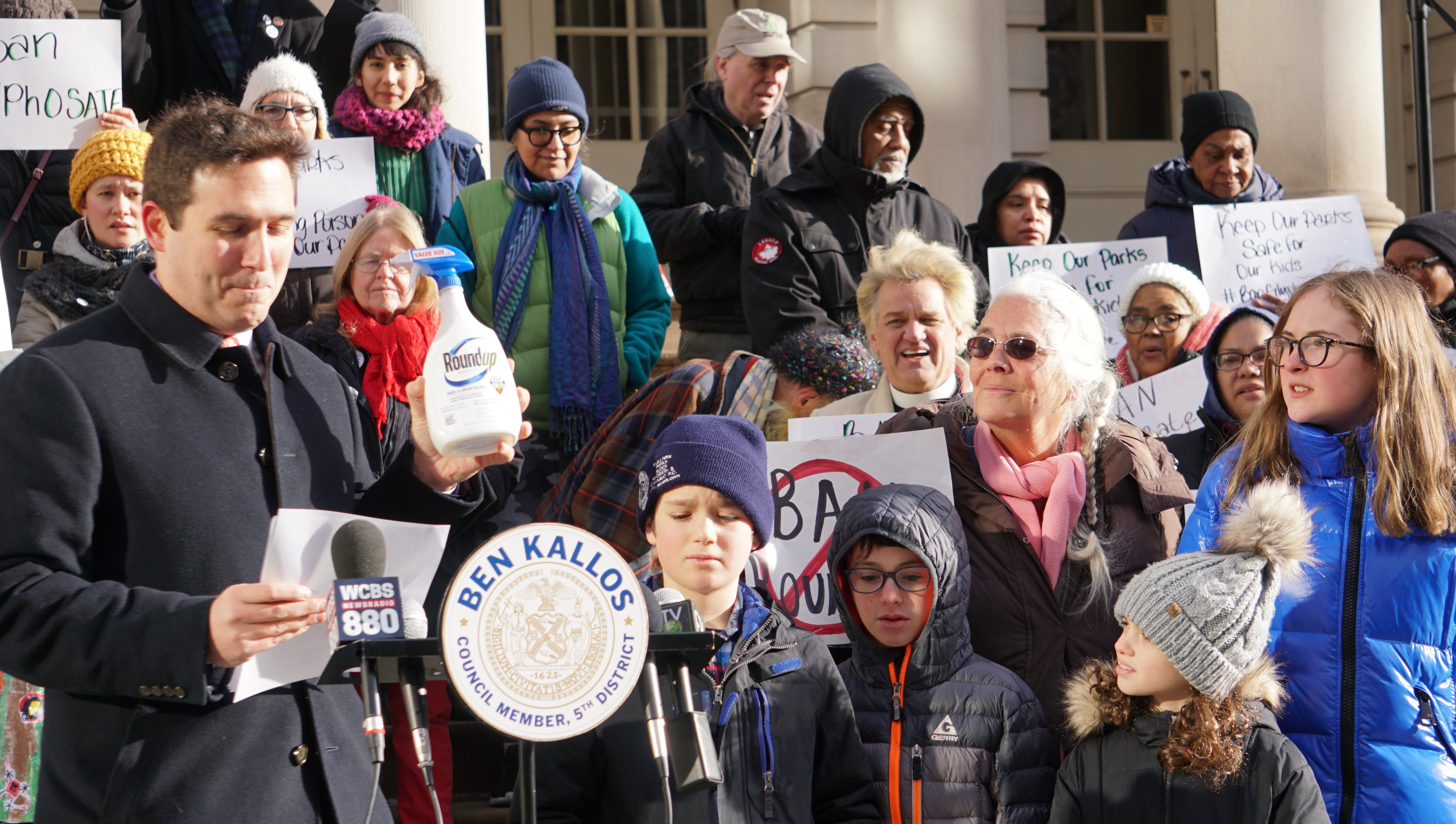 Watch the rally with advocates held prior to the hearing

New York, NY— Toxic pesticides would be banned from city parks under a bill being heard today sponsored by Council Members Ben Kallos and Carlina Rivera. The bill would ban all city agencies from spraying highly toxic pesticides, such as glyphosate (Roundup), and be the most far-reaching legislation to implement pesticide-free land practices in New York City parks. The World Health Organization’s International Agency for Research on Cancer classifies glyphosate as a probable carcinogen, and the chemical is partially or fully banned in many countries throughout the world.

The City’s most heavily used liquid herbicide is glyphosate, sold as Roundup, which represents over 50% of pesticide use by city agencies and was sprayed 1,365 times in 2013, according to a Health Department Report. In contrast, Chicago has reduced pesticide use dramatically, and now 90% of its parks are pesticide-free since 2014. The use of this pesticide poses a health risk for anyone who frequents city parks and playgrounds, as well as, city workers, including city parks employees who come into contact with glyphosate containing chemicals while spraying.

The bill was introduced on April 18, 2019 and will now be heard in the Committee on Health, after receiving support from a veto-proof supermajority of 34 City Council co-sponsors.

“Parks should be for playing not pesticides,” said Council Member Ben Kallos. “All families should be able to enjoy our city parks without having to worry that they are being exposed to toxic pesticides that could give them and their families cancer. As a new parent, my daughter isn’t allowed to play on the grass, especially because as a baby she puts everything in her mouth. I look forward to working with all of our city agencies to ban toxic pesticides and keep our children safe.”

“Our parks and open spaces are critical to our health when our communities have so few of them, so we have to make sure our city is pushing toward making them safer, greener, and more resilient. But no New Yorker should ever have to be exposed to toxic pesticides and it is long past time that our city ban these dangerous chemicals. Other big cities have found effective methods of reducing pesticide use, and I know we can work with our partners in City Hall to reach a solution that protects our children and families,” said New York City Councilwoman Carlina Rivera.

Monsanto, the company that marketed glyphosate as Roundup and which has since been acquired by Bayer, was ordered to pay $78 million by a San Francisco court to Dewayne Johnson, a former school groundskeeper who is terminally ill with cancer that a jury determined was caused in part by the use of Roundup. In a second lawsuit, in March of 2019, a jury ordered Bayer to pay $80 million to Edwin Hardeman, whose cancer was determined to have been caused, in part, by the use of Roundup on his property.

The proposed legislation would move city agencies to use biological pesticides, which are derived from naturally occurring substances, as opposed to synthetic substances. There is a general acceptance that biological pesticides are usually inherently less toxic than their conventional counterparts and are often more effective at targeting a specific pest. Biological pesticides can also be used in smaller quantities and break-down more rapidly in the environment. Further, the bill adds measures to prevent harmful pesticides from contaminating water systems by preventing synthetic pesticides from being sprayed within 75 feet of a natural body of water.

“Millions of New Yorkers rely on our public parks. Children, seniors, working people, immigrants, and their pets use them every day, but most don't know the weed killer Roundup used in our parks is literally poisoning them. As our report shows, the neighborhoods affected are black and brown communities, such as Idlewild Park in Queens, where 90% of the residents are black. Average New Yorkers can't just go to a park upstate or in Long Island to enjoy the outdoors. Public parks are the backyard for most New York City residents. We have banned plastic bags, we have banned trucks idling, and we have banned Styrofoam. It is high time we ban the weed killer Roundup,” said Bertha Lewis, President of The Black Institute.

“Mounting evidence from independent medical experts suggests that widespread applications of certain pesticides pose unnecessary risks to public health. We welcome the proposal from Councilmembers Kallos and Rivera to protect New Yorkers by limiting pesticide applications on city properties and look forward to working with them on the details of this forward-looking legislation,” said Eric A. Goldstein, New York City Environment Director at the Natural Resources Defense Council.

NYLPI supports efforts to reduce the use and presence of toxic chemicals in our city. Workers and communities - particularly those that are already overburdened with toxic exposures - will benefit from the passage of this bill. Parks offer refuge and respite to millions of New Yorkers and banning toxic and potentially carcinogenic chemicals from them will help to preserve and enhance the health benefits of green space." said Christine Appah, Senior Staff Attorney, Environmental Justice Program, New York Lawyers for the Public Interest.

"Pesticides are inherently toxic compounds but their toxic effects are not limited to the intended target. Any reasonable efforts to reduce or eliminate exposure helps protect human health--particularly of those most vulnerable to harm from pesticides: pregnant women and children," said Ken Spaeth, MD, MPH, Division Chief, Occupational and Environmental Medicine at Northwell Health and Assistant Professor, Zucker-Hofstra Northwell School of Medicine.

"Pesticides damage ecosystem health by attacking biodiversity of soil and plants, polluting water, and decimating wildlife. More than that, they’re disruptive to the health and well-being of adults, children and pets. Pesticide exposure has been linked to a significantly increased risk of developing cancer, neurological disorders like Parkinson’s disease, mental health disorders and many more. These chemicals have no place in New York City parks, which are for many the only green spaces available for nature immersion, physical education, and sports and recreation. Now more than ever, it’s urgent that we understand that we are all connected and that it’s impossible to poison one organism without poisoning ourselves. It’s time to ban pesticides," said Maya Shetreat, MD, Adult and Pediatric Neurologist, author of The Dirt Cure, and Founder of The Terrain Institute.

"Pesticides interfere with brain development, are linked to cancer, and can disrupt hormones. Passage of Intro 1524 is a critical step towards protecting children’s health by eliminating the use of these chemicals where they live, learn, and play,” said Sarah Evans, PhD MPH, Assistant Professor Department of Environmental Medicine and Public Health Icahn School of Medicine at Mount Sinai.

"We strongly support the efforts of Councilman Ben Kallos to advance the transition to non-chemical pest control in all New York City parks. It is particularly important that the use of glyphosate (RoundUp) will be prohibited based on a growing and robust body of science that has determined it to be carcinogenic,” says Patti Wood, Executive Director of Grassroots Environmental Education, a New York-based non-profit environmental health organization that has been working on the issue of pesticides and children’s health.

“With glyphosate being the poster child for unacceptable hazardous pesticide use around our children and families, this legislation is critically needed to protect the residents and the environment of New York City and advance the adoption of organic land management practices in parks and playing fields,” said Jay Feldman, Executive Director of Beyond Pesticides.

"Richman Law Group affirms its position that biocides impose harmful consequences on the public. Research has shown that biocides such as glyphosate are linked to non-Hodgkin’s Lymphoma as well as other cancers and chronic illnesses. For years, RLG has sought to draw attention to the pervasiveness of glyphosate in the American food supply, and to push back against manufacturers who attempt to mask glyphosate residues in food with marketing terms like “natural” and “pure.” RLG’s glyphosate-related litigation on behalf of non-profit organizations is necessitated by a lack of sufficient legislative or administrative action, and touches all corners of the human and animal food supply. Passage of this bill would benefit all New Yorkers and increase public awareness of the dangers of biocides," said Kim Richman, founding partner at the Richman Law Group.

“How empowering it is for my kindergarten students to see concerns about toxic pesticides that evolved during their research about foods in our school cafeteria become legislation that will protect the health and lives of millions and millions of people who use New York City’s parks and public spaces! We hope that the City Council and the Mayor will listen to the call of my former students, “Ban toxic pesticides. Use only nature’s pesticides! Pass a law!” said Paula Rogovin, retired teacher whose kindergarten class first inspired Council Member Kallos to address the use of toxic pesticides in our parks.

“This bill is an important step. It’s about time New York City protected its people, especially children, from glyphosate and other toxic chemicals used in our parks and public spaces. But the situation needs oversight nationally. Glyphosate is now in all our food and water, killing our good gut bacteria and wiping out nutrients in the soil that make plant foods nourishing. Those who are heavily exposed get cancer, and we are all paying a price for allowing its sale and use for convenience and cosmetic purposes without regard to its effects on our health,” said Jill McManus.

Council Member Kallos first introduced legislation to limit the use of damaging pesticides in City parks in 2015 after hearing from the students at P.S. 290, who expressed concerns over the toxicity and health effects on both humans and animals. Since that original bill was introduced, glyphosate has been banned or limited in many jurisdictions throughout the world, including Brazil, France, Netherlands, Portugal. In 2017, the state of California added glyphosate to its official list of chemicals and substances known to cause cancer.

While the original bill derived the list of banned substances from the EPA’s list only, the new legislation includes substances classified as toxic by the EPA and the California Office of Environmental Health Hazard Assessment (OEHHA). Local Law 35 of 2005, banned many substances but failed to include dangerous pesticides such as Round-Up (Glyphosate), our new bill will ensure no toxic pesticides are used on city parks, except in very limited emergency situations.

In addition, Council Members Kallos, Rivera, and 34 of their Council colleagues sent a letter this morning to New York City Mayor Bill de Blasio calling on him to place a moratorium on the spraying of toxic pesticides until policies and procedures can be codified by the City Council and relevant agencies.

Other Organizations that Testified in Support Included: