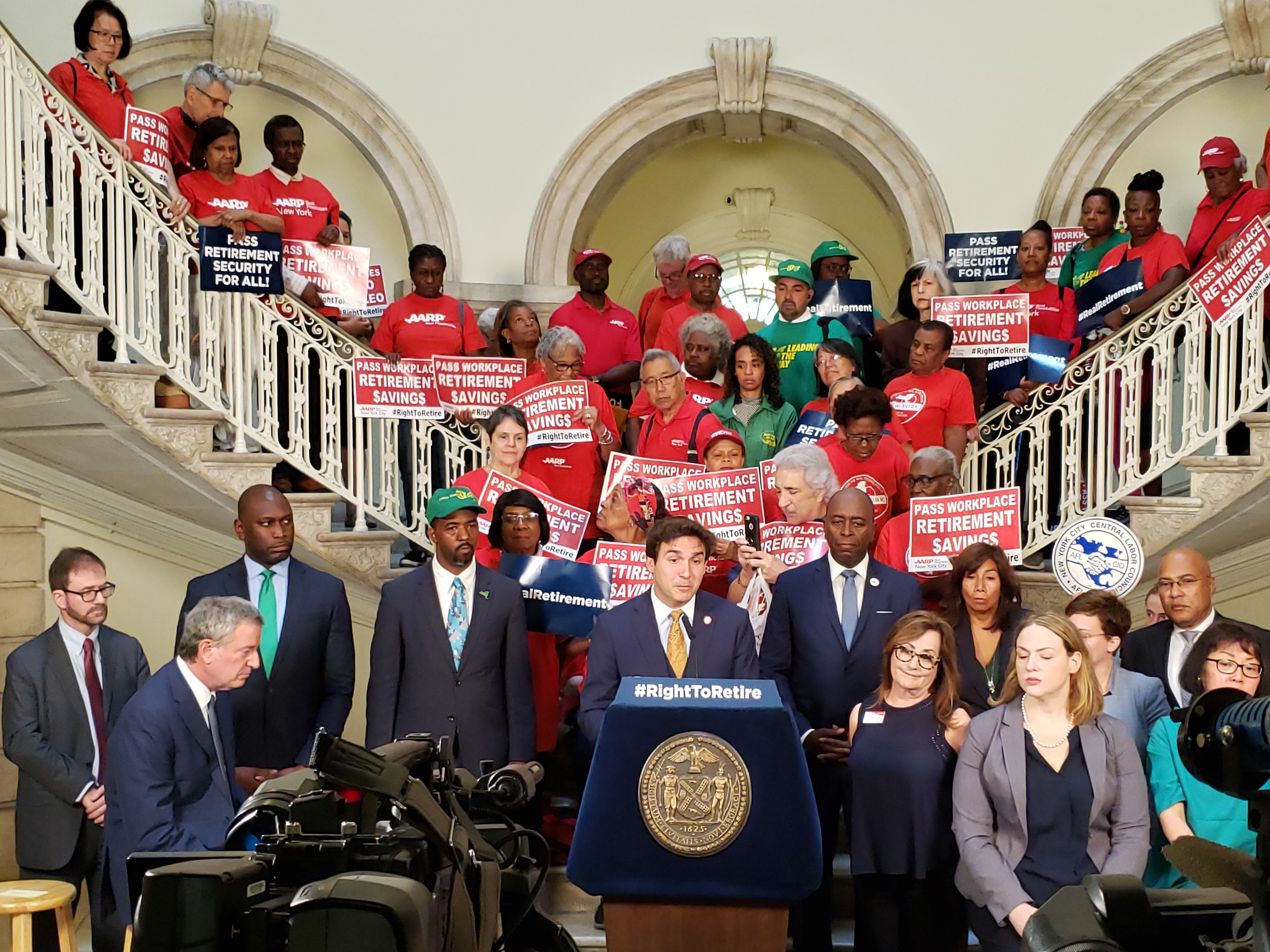 New York, NY – More than one million private-sector workers in New York City that do not have any access to retirement plans through their employers could finally get one as “Retirement Security for All” legislation sponsored by Council Members I. Daneek Miller and Ben Kallos received a public hearing in the City Council. Employers with more than 4 employees that do not currently offer a retirement plan would be required to automatically enroll employees through payroll deduction. There would be no cost to employers with small employers and gig workers able to voluntarily join the program.

States and municipalities throughout the nation are seeking to take provide a state-sponsored retirement savings program, with at least 43 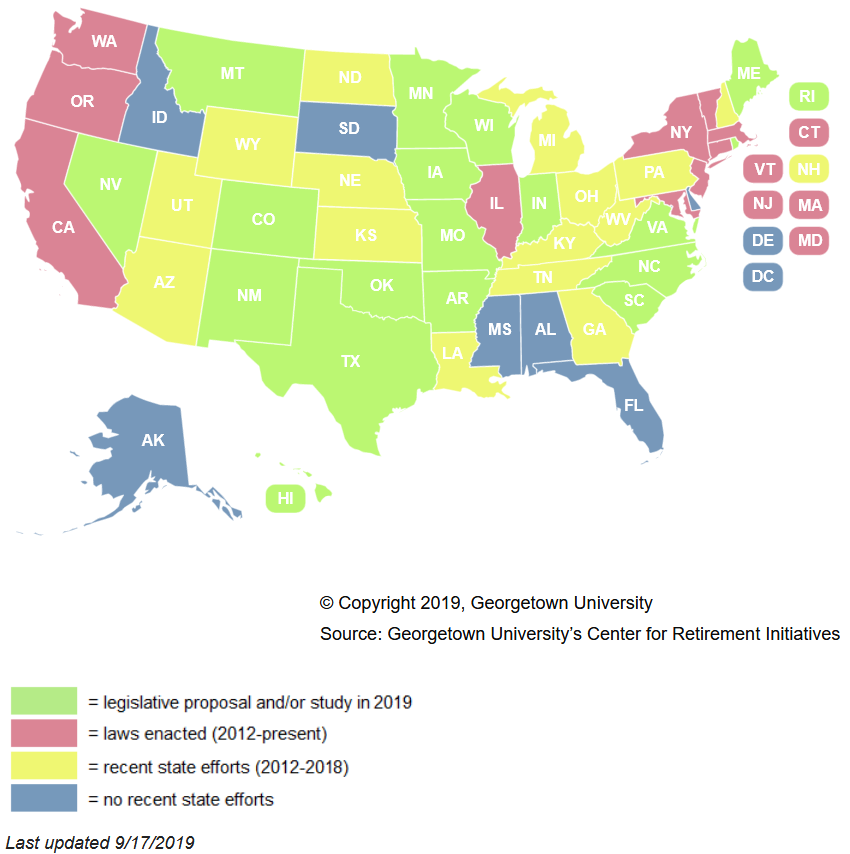 states acting to implement a new program, undertaking a study, or proposing legislation according to Georgetown University Center for Retirement Initiatives. So far, 10 states and 1 city that have enacted government-sponsored retirement programs for private-sector workers. OregonSaves Network launched its first-in-the-nation auto-IRA for private-sector workers in 2017 and has already signed up 3,200 employers, established 50,000 accounts for new savers, with a participation rate of 70% and $30 million saved in just two years, with monthly contributions of nearly $4 million a month and increasing. As it was pointed out in a recent op-ed titled "Make Retirement Savings Plans Accessible to All New Yorkers" by Council Members Ben Kallos, I. Daneek Miller and Ben Finkel the New York state director of AARP; data shows people are a full 15 times more likely to save for retirement if an employer offers a plan. A survey conducted by AARP also found that over half of all Boomers, and two-thirds of Gen X say they will likely leave the City because they can no longer afford to live here. Their significant spending power will be lost if they flee.

New York State Attorney General and then Public Advocate Letitia James authored legislation now re-introduced by City Council Member Ben Kallos and Civil Service and Labor Committee Chair I. Daneek Miller, Int. 888 & Int. 901, that would allow every private sector worker in New York City to save pre-tax for retirement even if their employer did not offer a 401K.

Mayor Bill de Blasio announced his intention to continue moving forward with “Retirement Security for All” during the State of the City on January 10, 2019, that previously announced on February 25, 2016. The plan met with brief uncertainly following the passage of House Joint Resolutions 66 and 67 by Rep. Walberg (R-MI) and Rep. Rooney (R-FL) on March 30, 2017 and signature by Trump on April 13, 2017, to roll back regulations permitting States and Municipalities to offer retirement savings plans.

“Every New Yorker should be able to save for retirement. It's hard to imagine that Republicans are all of a sudden against Americans taking 'personal responsibility' but stopping retirement savings for all was at the top of the Trump administration's list in 2017 and even passed the Republican Congress," said Council Member Ben Kallos who is an Employee Retirement Income Security Act (ERISA) attorney. “Thank you to Mayor Bill de Blasio for taking this bold step to help millions of New Yorkers save for retirement. I can't wait to help millions of New Yorkers save for retirement and upset the Trump agenda all at the same time.”

“Fulfilling the goal of retirement is fast becoming a lost tradition in America,” said Council Member I. Daneek Miller, Chair of the Committee on Civil Service and Labor. “People are working desperately to keep pace with ever-increasing living costs, but lack the means or direction to avoid falling into poverty in their later years. Our legislation will help more than half of the working New Yorkers who are currently without a savings plan set aside a portion of their earnings so they can lay a foundation for a stable future, and particularly benefit communities of color who saw their average household wealth plummet for over three decades. I thank Mayor de Blasio for embracing this bold proposal. Council Member Kallos and I look forward to working with him and fellow advocates to make Retirement Security for All New Yorkers a reality.”

In New York City, two-thirds of workers, more than 2 million people in 2009, did not participate in employer-sponsored retirement plans, largely because their employer didn’t offer one, according to a 2011 report by Comptroller John Liu. More than one-third of households lead by a member who will become a senior citizen in the next decade will either be unable to retire or have to live on entirely or primarily on Social Security Income, according to the same report. The National Institute on Retirement Security predicts a United States retirement saving deficit of as much as $14 trillion.

On April 12, 2018 Governor Andrew Cuomo signed budget bill S.7505C / A.9505D that established the “New York State Secure Choice Savings Program” as Article 43 of the General Business Law to provide employers that do not currently offer retirement savings to their employees with the option of offering a Roth individual retirement account (Roth IRA) managed by the State.

The legislation authored by Public Advocate Letitia James and introduced with Council Members Kallos and Miller on April 25, 2017 and re-introduced on May 9, 2018, consisted of two bills Int. 1580 of 2015 now Int. 901 of 2018 to establish a board and Int. 1574 of 2015 now Int. 888 of 2018 to establish a plan. The Board would be established to administer the plan, engage in rulemaking, auditing, and reporting, along with public education and community outreach forums. The plan would cover all employers with more than ten employees that did not already offer a retirement plan. At no cost to the employer, private sector employees would be automatically enrolled, with an option to decline, in a payroll deduction pre-tax retirement savings plan administered by the City.

Unlike the New York State plan and similar to states like California, Connecticut, Illinois, Maryland and Oregon, the New York City legislation would mandate that certain employers automatically enroll their employees if they don’t already offer an option. The New York City plan would default to a Roth IRA with a contribution rate of 3% with option to change rates or choose an IRA.

In 2016, the new legislation was initially enabled by rules promulgated by the United States Department of Labor (RIN 1210-AB71) prior to the Trump administration stepping in to block it in early 2017. Kallos joined then Public Advocate James in a January letter advocating for cities to be empowered to offer Savings Arrangements Established by States for Non-Governmental Employees.

In 2015, Public Advocate James and Council Member I. Daneek Miller had introduced and heard Int. 692 to create a review board to study and issue a report regarding recommendations for the City to establish a retirement security program for private-sector workers.

Prior to their election, Kallos practiced Employee Retirement Income Security Act (ERISA) law at Gorlick, Kravitz and Listhaus, representing laborers at the Mason Tenders District Council fighting for the retirements of workers and Miller served as President of Amalgamated Transit Union (ATU) Local No. 1056 and co-chaired the MTA Labor Coalition which represents 29 unions and more than 60,000 workers.