New York, NY – Following the New York Court of Appeals' decision in Wallach vs. Town of Dryden and Cooperstown Holstein vs. Town of Middlefield to allow municipalities to ban fracking within their limits, Council Members Ben Kallos, Helen Rosenthal and Costa Constantinides have introduced a bill for New York City to stand in solidarity with Otsego County’s Middlefield and Tompkins County’s Dryden in banning hydro-fracking. The move is a strong statement from New York City against fracking in the city, surrounding areas and the state.

According to FracTracker.org, New York City would be joining 80 municipalities with a ban, 100 with moratorium in place, and 87 making a push for a ban or moratorium. Though there are many unknowns about hydrofracking, it has already been shown to pose serious dangers to human health and the environment, including:

“Our City, surrounding environment and New York City drinking water must be protected from the dangerous effects of fracking. Fracking has been shown to be toxic and damaging—but we still have not banned it in New York State. New York City stands in solidarity with small towns who have banned hydrofracking upstate in protecting our residents and surrounding lands from the immense dangers and unknowns of hydrofracking,” said Council Member Ben Kallos.

"While it is highly unlikely that anyone would 'frack' within NYC, it's important to make this gesture of solidarity--- fracking should not be an acceptable practice in NYS: upstate or downstate," Said Council Member Helen Rosenthal (D-Manhattan)."If the state-wide moratorium were to be revoked, fellow New Yorkers in cities, towns, and villages throughout our state would be thrust onto the front lines and forced to curb this devastating impact on the environment through local ordinances. Let this bill signal solidarity with those localities taking action to protect our land, our food, our water, our health and our future."
Council Member Costa Constantinides said, "New York has the obligation and opportunity to encourage innovation and sustainable energy production. We have already taken the first step by committing to reduce our carbon emissions by 80% by 2050. As we continue to combat climate change we must shift our focus from the unsustainable and untested new sources of energy such as hydrofracking and move our city towards more green energy.  Hydraulic fracturing has been correlated to environmental hazards including toxic waste, developmental health issues, and pollution.  Prohibiting the practice throughout our five boroughs will ensure the safety of our environment, public health and have us stand with our fellow NYS counties against this dangerous enterprise.  I thank my colleagues Council Members Ben Kallos and Helen Rosenthal for their bold vision on this important issue."

According to FracTracker.org, the following are the list of municipalities that have movements against fracking: 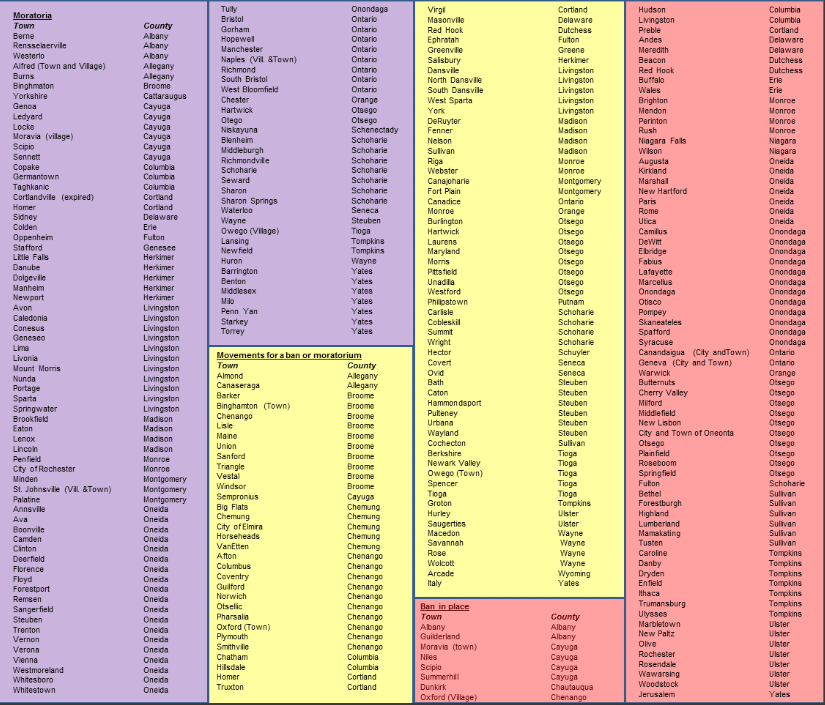