Upper East Side, NY – Today Council Member Ben Kallos and the New York City School Construction Authority (SCA) President and CEO
Lorraine Grillo announced plans to build a $6.5 million gym for Eleanor Roosevelt High School (EHRS) across the street at 355 East 76th Street as part of a new Pre-K Center. At the announcement, Kallos and Grillo were joined Assembly Member Rebecca Seawright and by Principal Dimitri Saliani. Other speakers included ERHS alumni Amanda Cavaliero who asked Mayor Bill de Blasio for the gym at a town hall last year as well as Sadie Wenger who was one of the students who gathered more than 5,000 signatures as part of a petition to push the City to build a gym. 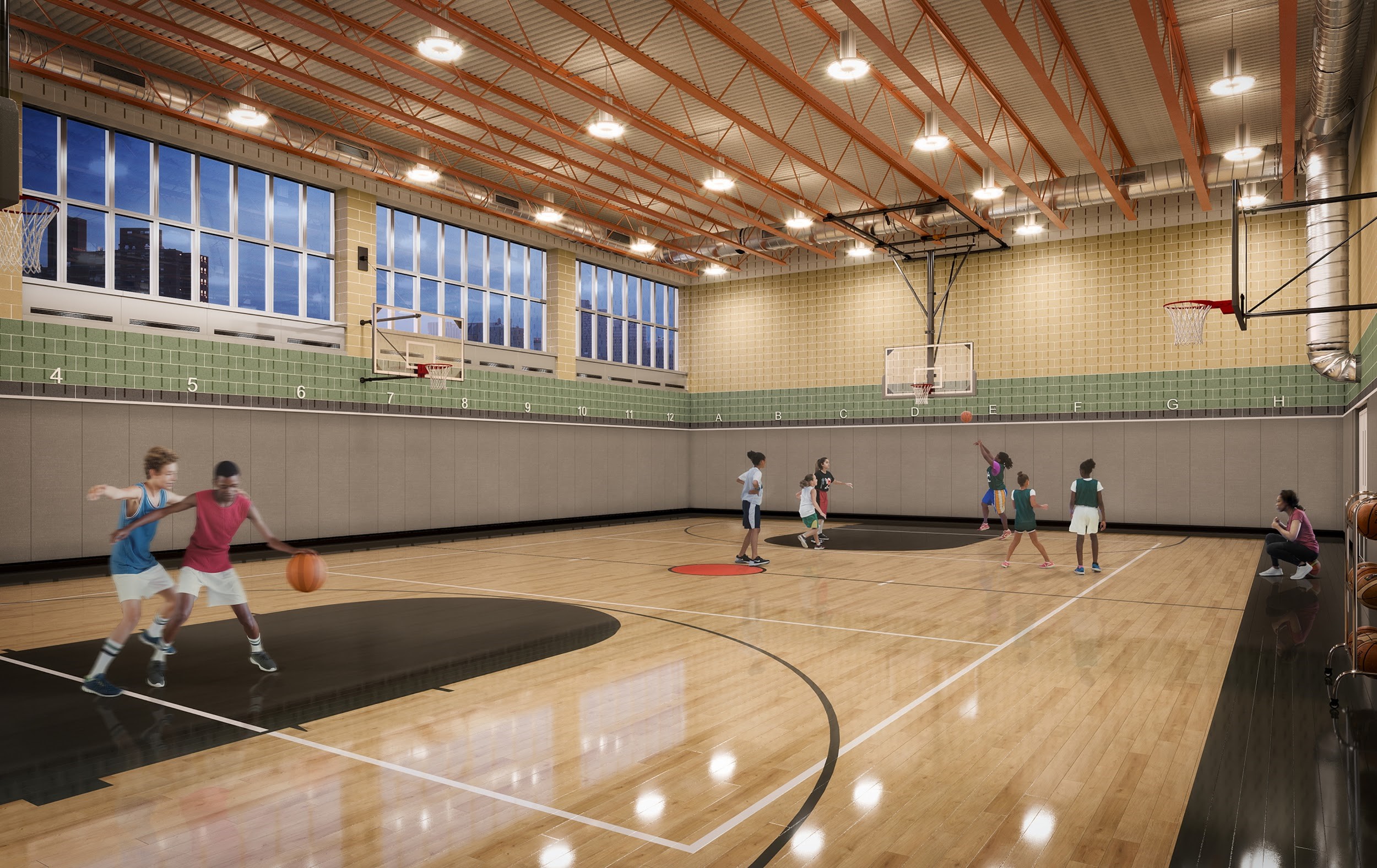 In June of 2017, Mayor de Blasio announced a $385 million plan for the Universal Physical Education Initiative. Following the announcement Council Member Kallos immediately advocated for SCA to build gyms for schools on the Upper East Side that did not have a gym and needed one. Following that work on January 17, 2018 at a Town hall with Mayor de Blasio ERHS students Amanda Cavaliero and Sophie Scherer asked for a gym from the Mayor himself and continued to advocate directly with SCA President and CEO Grillo. This year current students garnered media attention when they organized a formal petition at BenKallos.com/ELROgym. They quickly garnered additional media attention when they gathered over 5,000 signatures from members of the community. 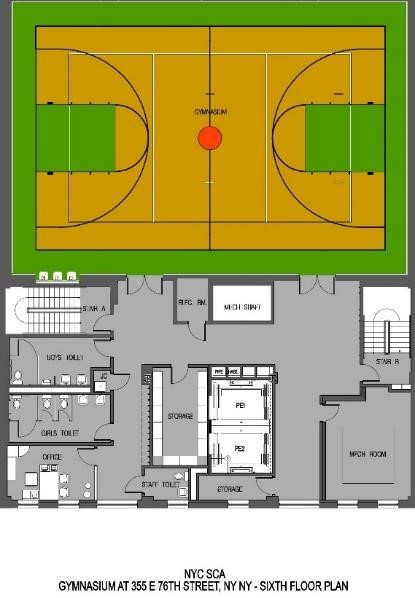 elected officials for additional Pre-K seats on the East Side. Construction on the new gym will begin in December of 2019 and is expected to be completed by early 2021. The new gym space will occupy 3,825 square feet, with a higher roof provided at height of 88 feet from the average curb level 126 feet to the top of the roof deck. The existing roof will be raised by a total of 13 feet 3 inches and there will not be any change to the existing floor area.

Eleanor Roosevelt High School is one of the top high schools in New York City and America with 500 current students from Community School District 2 and the surrounding city with representation from 40 different countries. The school was founded in 2002 and is located in a school building without a gym despite boasting 12 varsity sports that participate in the Public School Athletics League including: boys football, girls flag football, girls and boys soccer, volleyball, girls and boys basketball, girls and boys tennis, coed track, baseball, and softball.

“This is a truly unique project where we are making creative use of this space by adding a gym while we also convert the lower floors of what used to be an old parking garage into space for pre-k students,” said Lorraine Grillo, President and Chief Executive Officer of the New York City School Construction Authority. “The new gym will provide the physical education space that students at Eleanor Roosevelt High School have been lacking and is part of the School Construction Authority’s commitment to fulfill Mayor de Blasio’s Universal Physical Education Initiative to ensure all students have access to indoor space for physical education.”

“I was proud to lead the effort to create the Eleanor Roosevelt High School, which has exceeded everyone’s expectations for the quality of education and the enthusiasm of students seeking admission.  Up until now, ERHS has had everything except a gymnasium.  Exercise and recreational play are critical to keeping students healthy and active, and it is incredibly important for every student to have the opportunity to take gym. I am pleased to hear that Council Member Kallos’ efforts to increase the number of gymnasiums in Upper East Side public schools, and leadership by EHRS students who organized a petition drive, will result in a new gym at Eleanor Roosevelt High School,” said Congress Member Carolyn Maloney.

“It is hard to believe schools without a gym. It is even harder to believe high school teams winning when they don’t have one. Eleanor Roosevelt High School students have not only won championships but now they’ve won a gym,” said Council Member Ben Kallos. “Every child must have a real gym for physical education and athletic competition. As New York City battles with childhood obesity, we need to give children every opportunity to burn off calories throughout the day. Thank you to Mayor Bill de Blasio and School Construction Authority President and CEO Lorraine Grillo for taking these students so seriously and building this gym.”

Council Member, Kallos’ efforts to increase access to gymnasiums for Upper East Side public school students was documented by Our Town in November of 2017. The paper reported that Kallos secured space at the Spence School’s new 54,000-square-foot athletics complex it hopes to build on East 90th Street for day time physical education classes from nearby P.S. 151, the Yorkville Community School, and P.S. 527, the East Side School for Social Action.

“As a member of the Assembly Education Committee and parent of two students who attended and graduated from NYC public school, I strongly support the importance of funding recreation in schools so students are not only academically challenged but physically and socially supported during gym class or recess.  I commend Council Member Ben Kallos and School Construction Authority’s President and CEO Lorraine Grillo for being an advocate for public schools and our youngest New Yorkers by securing space for a gymnasium on the Upper East Side.  Congratulations to the Eleanor Roosevelt High School community and Principal Dimitri Saliani for garnering support on a petition to express the need for a physical education space on the UES,” said Assembly Member Rebecca Seawright.

“For the last 17 years we have been often asked, what do we need and for the last 17 years, one the things I have asked for is a proper gym space. We have been dreaming for 17 years and now it has come true. I am amazed by everyone who has been involved in this from Amanda and Sophie attending the Mayoral town hall to the Council Member Kallos taking the steps needed to make this happen all of the Manhattan East Side elected have been amazing partners for us. I do want to give a special thank you to the students and the community. This happened because of their activism,” said Principal Dimitri Saliani.

“I am thankful that I learned discipline and dedication because I had to wake up really early to practice sports since our school did not have our own gym. Now I am thankful to President Grillo for listening to our need and taking it seriously. Thank you also to Council Member Ben Kallos for letting us ask the question at the town hall, now what we requested is becoming a reality” said Amanda Cavaliero a graduate of Eleanor Roosevelt High School who asked Mayor de Blasio for a gym in January 2018.

“We have some very talented athletes at this school so I am excited that the freshmen will get the opportunity to have their own gym and not use stranger’s gyms I think this is amazing that it is finally coming into place. Thank you for all you guys have done” said Sadie Wenger student Athlete at of Eleanor Roosevelt High School.”