Following U.S. Open New Yorkers Have A Place to Play Indoor Tennis for $10 All Winter Thanks to Parks, Maloney, Brewer, Quart & Kallos

Following U.S. Open New Yorkers Have A Place to Play Indoor Tennis for $10 All Winter Thanks to Parks, Maloney, Brewer, Quart & Kallos

Midtown East, NY – On the heels of the U.S. Open hosted by New York City those inspired to one day compete or just play more tennis will have an indoor bubble with clay tennis courts that they can drop-in to during the off-season for just $10 mornings, afternoons, and evenings, with advocacy and support from Congress Member Carolyn Maloney, Council Member Ben Kallos, Manhattan Borough President Gale Brewer, Assembly Member Dan Quart. 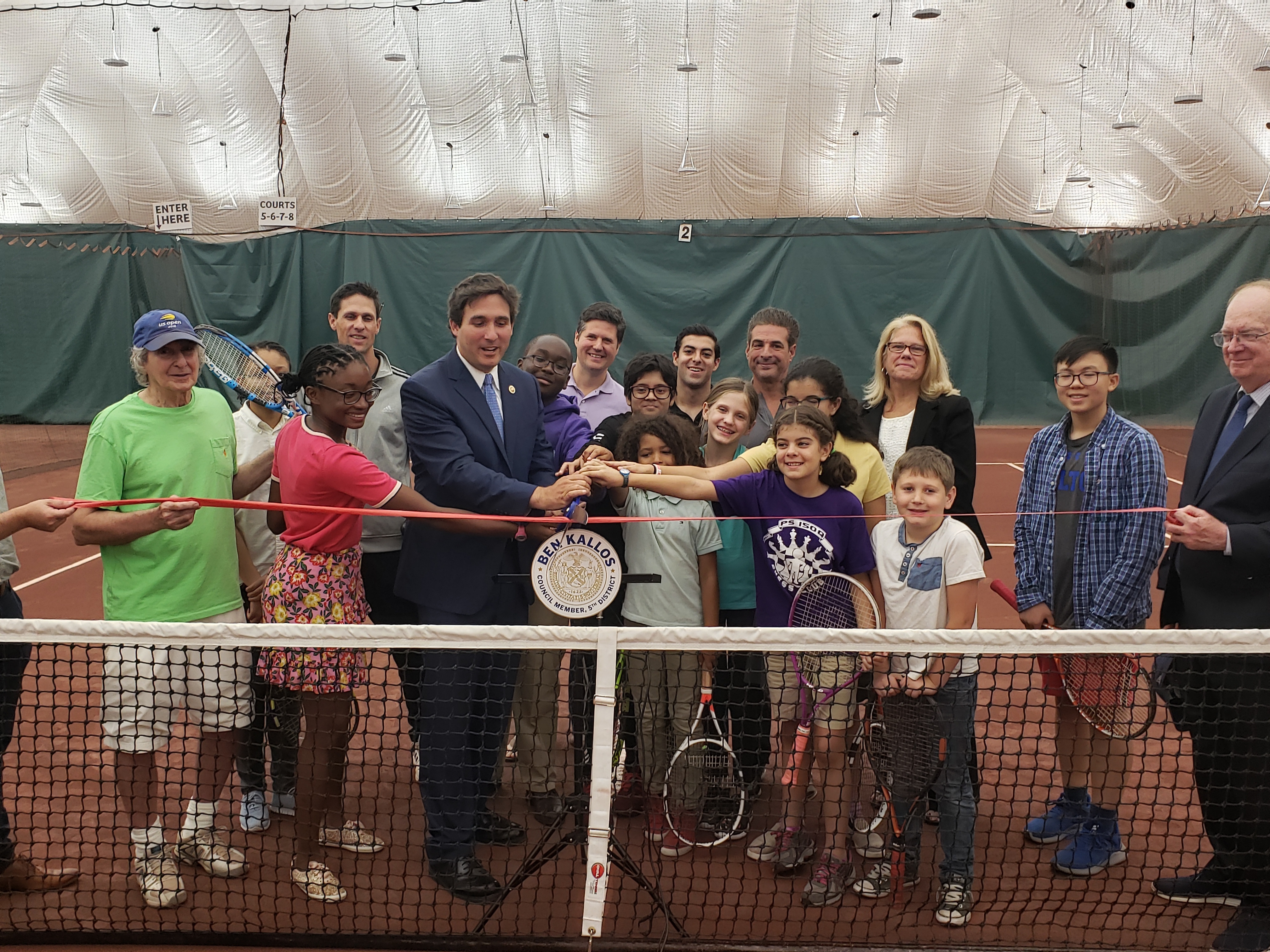 In addition, during the Winter Season, there will be the following community partnerships:

“We are very pleased to work with the community, the Parks Department and Councilman Ben Kallos to bring affordable tennis to all New Yorkers in our "state of the art" indoor red clay facility. We are especially pleased about the 30 scholarships that we are offering in our Pee Wee-Junior Development Program for children aged 3-18. Tennis is a lifetime sport and we look forward to seeing many New Yorkers playing at our "Miracle nder the Bridge" club,” said Dr. Anthony Scolnick.
“For far too long, recreation facilities and tennis courts have been cost-restrictive and inaccessible for many New Yorkers. Thank you Council Member Kallos, and all of my dedicated colleagues in government for working with Sutton East Tennis and the NYC Parks Department to make the Queensboro Oval an affordable place for New Yorkers to play tennis all winter. I am so happy that the Oval will provide a place for players of all ages and backgrounds to enjoy the game, and I can’t wait to get out on the court!,” said Congress Member Carolyn Maloney.

“For the first time ever, any New Yorker can play tennis all winter long for just $10 per person, per hour. Indoor tennis has always been prohibitively expensive for average New Yorkers. Now you can get a game in before work, over lunch, even late nights,” said Council Member Ben Kallos. “Thank you to Community Board 8 Manhattan for their partnership and advocacy in passing multiple resolutions and hosting a rally to Open the Oval, to Congress Member Carolyn Maloney for Co-Chairing the East River Esplanade Taskforce and her dedication to parks, Assembly Member Dan Quart for advocating in person at public meeting after public meeting, Mayor Bill de Blasio and Parks Commissioner Silver for securing this agreement, and last but not least, Dr. Anthony Scolnick for hearing the communities concerns and moving forward as strong partner.”

Dating back to January 7, 2010, Community Board 8 has held numerous public meetings with members of the community to discuss the future of the Queensboro Oval, with more than ten meetings from December 4, 2014 through January 12, 2017. Community Board 8 has passed several resolutions calling for the City to make the Queensboro Oval a year-round public park, which could include tennis courts accessible to more New Yorkers.

On February 16, 2018, the Parks Department issued this RFP. Council Member Kallos then sent a letter to the Parks Department asking that it reconsider a proposal to convert the playground to a multipurpose field or in the alternative revise the RFP to weigh more heavily applications that increased affordability and accessibility to the park, as opposed to revenue for the City. This could include expanding the summer public session, lowering fees, and running community-based programming.

On May 6, 2019, Congress Member Maloney, Borough President Gale Brewer, Assembly Member Dan Quart, and Council Members Ben Kallos and Keith Powers submitted testimony in support of the new agreement and highlighted the need to enhance nearby parks with year-round programming.

“Making tennis more affordable -- and thereby more accessible -- will not only stand to benefit New Yorkers but the overall development of the sport,” said Assemblymember Dan Quart. “With the U.S. Open coming to a close, I hope New Yorkers are inspired to pick up a tennis racket and try the game out for themselves.”

“It’s hard to imagine tennis news that could be bigger than the final weekend of the U.S. Open, but for Hunter College, this is it,” said Terry Wansart, Director of Athletics, Recreation, and Intramurals at Hunter College. “We are so grateful to Sutton East Tennis and the Parks Department—along with the amazing support from Congress Member Maloney, Council Member Kallos, Borough President Brewer, and Assembly Member Quart, among others. In tennis, ‘love’ means ‘nothing,’ but in this news, the love for our student community means everything.”

“We are delighted that the revenue from this facility will benefit the local parks in the district instead of being lumped together in the city’s general fund. A big win for the residents who treasure our local parks,” said Barry Schneider President of the East Sixties Neighborhood Association.

The Queensboro Oval site, bounded by York Avenue and 59th and 60th Streets, is built on land that the City of New York initially acquired for use as an alternative bridge approach. It is a City Department of Transportation (“DOT”) property managed by Parks, designated by the Board of Aldermen as a playground on January 19, 1909. It has hosted indoor tennis since the early 1970s.

A former collegiate athletic director, varsity tennis, basketball, and soccer coach, Dr. Scolnick has been a managing partner and tennis director at Sutton East since its inception in 1979. Anthony holds a Masters and Doctorate degree in Physical Education from Springfield College. He was a four-year letter winner in tennis, and as a soccer player was voted to the coaches All America squad. At graduation, he was awarded the coveted Sphinx Spoon an honor given to the senior athlete who has garnered the most publicity for the college through participation in sports.