New York, NY – Affordable housing and economic development projects receiving city subsidies would be required to pay workers a prevailing wage and provide training in the classroom and on the job through apprenticeship coupled with transparency, under legislation introduced by Council Member Ben Kallos. 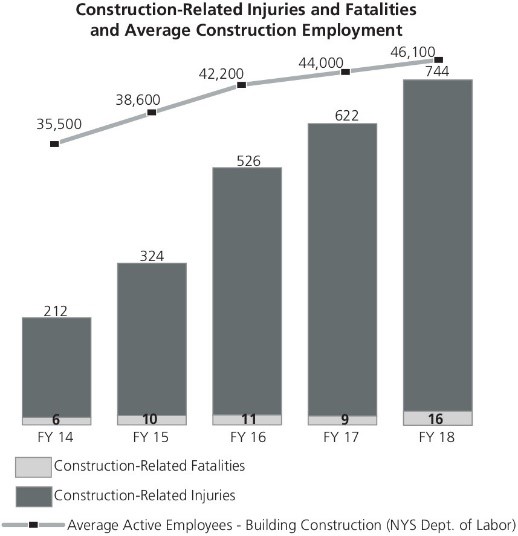 Construction-related injuries and deaths continued to rise for the fifth straight year to 744 injuries and 16 deaths in fiscal year 2018, approximately triple the 212 injuries and 6 deaths in fiscal year 2014 according to the Mayor’s Management Report, as reported by City and State. Over the past fiscal year, when incidents further increased by 20%, Local Law 78 of 2017 authored by Council Member Ben Kallos was implemented forcing developers to report of construction-related injuries and fatalities with new minimum fines of $2,500 for failure to report. The Local Law 78 reports have been available on a monthly basis since June 2018 from the DOB.

“Any project that receives taxpayer dollars must pay a prevailing wage, invest in workers with training and apprenticeship, and provide protection for workers' rights”, said Council Member Ben Kallos, a union-side labor lawyer. “Paying construction workers minimum wage on affordable housing projects is only making our City’s housing crisis worse. Moreover, no one should die in a construction accident that could have been prevented with proper training. New York City’s construction workers need to have the right to say no to a dangerous work situation.”

“Too many of our construction workers toil in building our City at great personal risk to their safety, but do so for the smallest measure of compensation,” said Council Member I. Daneek Miller, Chair of the Committee on Civil Service and Labor. “Until recently, these laborers had done so without any degree of training whatsoever to prevent injury or death, but critical gaps remain. Meanwhile, their wage and living standards continue to be severely depressed, causing them to fall further behind the pace of our economy. I’m proud to join my colleague Councilman Kallos in sponsoring this legislation to provide these employees with the education necessary to avoid workplace hazards as well as ensure they receive greater financial security for themselves and their families.”

For a subsidy from any level of government valued at $1 million or more on a project of 100,000 square feet or a residential building with more than 50 units the Introduction Introduction 1322 of 2019 would require:

Prevailing wage requirements were originally introduced by Council Member Elizabeth Crowley as Introduction 744 of 2015. All of these bills received hearings but did not pass in their respective sessions.

“Council Member Kallos understands that our City must promote the highest standard of safety for construction workers on affordable housing developments and I am pleased to see him work to makes these important bills become law, said Former Council Member Elizabeth Crowley.”

“With 744 injuries and 16 fatalities in 2018, the safety of construction workers in the New York City continues to spiral out of control.  NYC subsidies support hundreds of so-called "economic development" and affordable housing projects where construction workers are routinely paid nothing more than subsistence wages for the dangerous and debilitating work they do and receive little or no training in their trade or craft.  At the same time, the developers, professionals and consultants working on these city-subsidized projects are making a small fortune. Bricklayers & Allied Craftworkers Local Union No. 1, NY supports Council Member Kallos' proposed legislation to address all these issue by requiring middle class, prevailing wages and apprenticeship training for construction workers engaged on most larger, city-subsidized projects and improving transparency over development costs associated with these projects,”  said Jeremiah Sullivan, Jr. President Bricklayers & Allied Craftworkers Local Union No. 1, NY

“Prevailing wage means a living wage in the New York Metropolitan area. Anyone who believes construction workers can support their families, send their kids to college, do all the things we associate with stable middle-class lives, on $20.00 per hour is kidding themselves. The BCA and its unionized contractor members have been building New York City since our Association began in 1933. Along the way our contractors have provided solid, well-paying jobs to generations of construction workers. We respect the partnership between management and labor. We will not abandon that now as others seek to drive wages down and weaken our already struggling working families. New York City has the right to make prevailing wage and apprenticeship training a condition to any financial incentive package it offers the private sector. You want the benefits, pay the wages.” said John O’Hare, Managing Director of the Building Contractors Association.

“Council Member Kallos has been a stalwart advocate for construction site safety during his tenure in the City Council, and we applaud his continued commitment through his introduction of these two companion pieces of legislation. Introductions 744 and 1432 will require that nearly all projects that receive subsidies or other financial assistance from New York City be subject to prevailing wage mandates and apprenticeship training requirements. Both of these requirements will ensure that when taxpayer-funded financial assistance is supporting a project that the public can expect that those subsidies will result in the creation of good-paying jobs; a trained and skilled workforce; and a worksite that is safe for construction workers and the public alike. Local 14 of the International Union of Operating Engineers, whose members are trained and licensed to operate the most sophisticated and dangerous crane equipment in the City of New York, looks forward to working with Council Member Kallos to support this crucial legislation.” said Eddie Christian, Business Manager, of the International Union of Operating Engineers Local 14-14B.

“Construction workers have some of the most dangerous jobs in New York City, and some are paid poverty wages for building our iconic skyline. These workers are being twice-exploited with minimum wage jobs that often violate safety standards, and these contractors are receiving New York City resident’s tax dollars in the form of subsidies. Council Member Kallos’ legislation would right this wrong by mandating that affordable housing projects pay workers a prevailing wage and invest in training and apprenticeship programs, which prevent injuries on the job,” said Charlene Obernauer, Executive Director of the New York Committee for Occupational Safety and Health (NYCOSH).

"Construction work is New York City’s most dangerous profession. The exposure to heights, heavy machinery, power tools, and more all pose a risk for injury and death.  It is a moral obligation for our city to ensure that workers are trained and protected in this industry. Public money must be a vehicle to create good safe jobs this why we applaud Council Member Kallos for taking leadership and introducing these two important pieces of legislation that are long overdue". said Maritza Silva-Farrell executive director of ALIGN.

“On behalf of the nearly 6,000 rank-and-file hard-working men and women of Plumbers Local No. 1, I commend Council Member Kallos for his continued support of prevailing wage protections and apprenticeship training requirements by sponsoring Introductions 744 and 1432. As taxpayers, we all expect that when public subsidies are used to support private industry, there should be a commensurate public benefit. Unfortunately, countless private developments that have received public financial assistance have not delivered on that expectation of public benefit. Introduction 744 will ensure that there is a direct public benefit from all financially assisted projects in the form of quality, good paying jobs for community residents; prevention of construction worker exploitation; and faster, more efficient construction projects. Introduction 1432 would further ensure that apprenticeship training requirements apply to all projects that receive city subsidies. Through our operation of an apprenticeship program that requires apprentices to receive more than 10,000 hours of the on-the-job training and over 1,000 hours of classroom instruction, we at Plumbers Local No. 1 know firsthand the workplace health and safety benefits that are achieved through robust apprenticeship training requirements—better-skilled workers who are safer workers,” said Michael Apuzzo Business Manager, Plumbers Local No. 1

“Almost 30 years ago, when I was setting tile as a young, union, journey worker in New York City, I got to work on some of the early privately owned, city-subsidized, construction projects. If you care about income inequality and our vanishing middle class, you should be appalled to learn that in 1991, 28 years ago, I was taking home a better hourly wage rate than virtually any non-union tile setter employed on a privately owned, city-subsidized project is able to earn today.  We can't build a more equitable future for our city by looking the other way while the private developers constantly drive down the wages of vulnerable, marginalized construction workers and get handed a city subsidy to boot.  Councilmember Kallos' proposed legislation finally attaches some strings to NYC subsidies to make sure construction workers earn middle class, prevailing wages and get an opportunity to develop the skills for a real career in the construction business,” said William Hill, President of the Bricklayers & Allied Craftworkers Local Union No. 7 NY-NJ (Tile, Marble & Terrazzo).

“This fiscal year was the deadliest and most dangerous year for construction-related injuries and fatalities. We will continue to uphold the values of our union and work to ensure all workers are protected across job sites, properly trained and paid fair wages,” said District Council 9 Political Director Davon Lomax.” “We must put our workers before profits in New York City, which is why our union proudly supports the re-introduction of these critical construction worker safety bills.”

“Regular ongoing training and education are the most critical factors in preventing tragedies at construction sites. Providing the best possible preparation will make a dangerous job safer for workers and for those on the ground. These training requirements, as well as ensuring a living wage for construction workers on city-subsidized projects, will help New Yorkers build real and lasting careers in the industry, meaning more men and women who can support their families and live in the communities they help build,” said Patrick Dolan Jr. President, Enterprise Association Steamfitters Local 638.