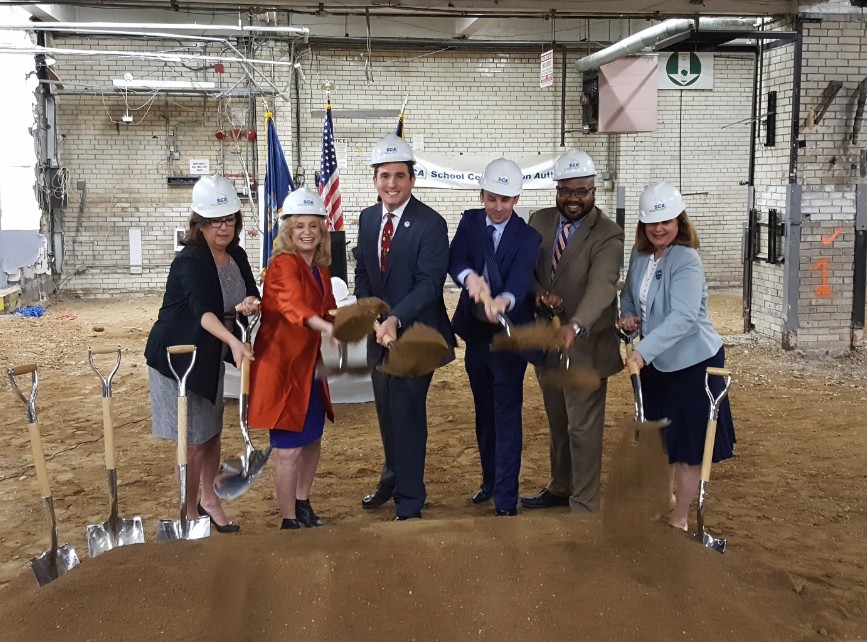 ity broke ground today on construction of a new Pre-Kindergarten facility located at 355 East 76th Street. The new site will help the Department of Education meet the demand for seats needed in the 2019 school year with 180 initial seats for fall of 2019. This new push from the City to build and open more Pre-Kindergarten seats on the Upper East Side comes after years of public advocacy from Council Member Ben Kallos and local parents to the Department of Education to fulfill the area’s need and live up to the promise of Pre-Kindergarten for all children in New York City.

The groundbreaking ceremony was attended by Congress Member Carolyn Maloney, and neighboring Council Member Keith Powers. Representatives from the offices of State Senator Liz Krueger, State Assembly Member Rebecca Seawright, and Manhattan Borough President Gale Brewer were present as these were the elected officials that have been supportive in Council Member Kallos’ four-year effort to increase the number of Pre-K seats on the Upper East Side. These new seats were originally announced by Mayor Bill de Blasio in January as part of Fiscal Year 2018 Executive Budget.

Since 2014 following reporting by WNYC that Yorkville, Lenox Hill and Roosevelt Island had 2,118 four-year-olds and only 123 Pre-Kindergarten seats Council Member Ben Kallos has worked to bring new seats to the district. Some of the ways his office has done this include identifying parents with four-year-olds who pledged to send their children to Universal Pre-Kindergarten, working with schools and providers to become Pre-Kindergarten locations, and working with the Department of Education through the application process to open more seats in the 5th Council District on the Upper East Side and Roosevelt Island.

"Seat by seat, class by class, and now building by building we are making sure the City opens up more pre-kindergarten seats so every four-year-old in my district can participate without commuting for an hour each way," said Council Member Ben Kallos. "Thank you the School Construction Authority for starting the work on this much needed new facility."

“Universal Pre-K provides all children the opportunity to learn in a safe environment, engage in enriching activities, and interact with other children,” said Congresswoman Maloney. “It is an important part of childhood development, but often it can be difficult to find a seat for every child that needs it. That is why I am thrilled to be breaking ground on a facility that will offer 180 new seats to the Upper East Side. Thank you to the Department of Education and Council Member Kallos for making this a reality, and I look forward to fall 2019 when we will start seeing students learning and growing together.”

“Today is an exciting day for the Upper East Side community. Since 2014, we have worked with Council Member Kallos, SCA President Lorraine Grillo, and Superintendent Bonnie Laboy to quadruple the number of free, full-day, high-quality pre-K seats on the Upper East Side, and we are now on track to add over 400 seats and meet need in this area by 2019,” said Deputy Schools Chancellor Josh Wallack. “There is a free, full-day, high-quality pre-K seat for every four-year-old in New York City.”

“This is an exciting day for the 180 children and families of the Upper East Side who can finally utilize essential Universal Pre-K services,” said Public Advocate Letitia James. “Education is a human right, and every child deserves access to high-quality public education options close to home. In our great City, that should be true whether you happen to live in East Harlem, East New York, or on the Upper East side. I commend Council Member Kallos for leading the way on this important issue in his district.”

"This is extremely good news for Upper East Side families," said Senator Krueger.  "Demand for pre-K seats has far exceeded supply in much of my district, and it is crucial to the success of this program to have quality pre-K sites available close to where families live.  I commend the Department of Education and Councilmember Kallos for their work to address this critical
need.”

"These much needed additional seats are good news for the children and families of the Upper East Side.  As a member of the Education Committee in Albany, I worked with colleagues, parents and teachers for a budget that included a $15 million investment in pre-kindergarten to expand high-quality, half-day and full-day pre-kindergarten instruction for three- and four-year-old children in New York State," said Assembly Member Seawright. "This hard-fought investment in early childhood education is wise support for a stable, healthy and thriving community.  All families should have the same access to quality education in their neighborhood. This action moves us closer to providing that essential assurance.”

"The Upper East Side knows only too well that you can't snap your fingers and make hundreds of new classrooms and seats appear. Opening new Universal Pre-K sites to meet this neighborhood's need has taken work," said Manhattan Borough President Gale A. Brewer. "I'm pleased to see this new Pre-K location open. Pre-K education is critical for every child's development, and we must keep working until every neighborhood has enough classrooms and enough seats."

“It is our duty to provide the highest number of public school students in the country with high-quality education, and expanding universal pre-K does just that,” said Council Member Keith Powers. “I thank the Department of Education for continued efforts with this successful program and am glad to partner with Council Member Kallos to benefit our districts’ youngest learners.”

On April 30th, 2017 Council Member Kallos organized and led a rally at St Catherine’s Park in the Upper East Side which was attended by dozens of local parents and their four-year-olds who did not have a Pre-K seat in the district. At that same rally where Council Member Kallos called on the City to build more Pre-K seats in the Upper East Side the support of Citywide elected officials like Comptroller Scott Stringer and Public Advocate Tish James who were in attendance was won. State Senator Liz Krueger, Manhattan Borough President Gale Brewer, Assembly Members Dan Quart and Rebecca Seawright all spoke at the event lending their voices in support to the cause. Former Council Member Dan Garodnick also spoke on behalf of his district which is now represented by Council Member Keith Powers who also attended.

Every child born in 2014 who lives in New York City is eligible to apply and attend Pre-K for All this fall. Offer letters have been sent to all families who applied to pre-K by the March 30 deadline. To accept an offer, pre-register in person at the program where your child got the offer by June 6—contact the program to schedule a time.

Families can still apply and receive offers to programs. There is a seat available for every family in the City. Families that submitted an application after the deadline are placed on the waitlist for all programs on their application, and could begin getting waitlist offers today. These families will receive a call from an Outreach Team specialist to walk them through all available options and will be placed into programs over the next several weeks and months, depending on seat availability. Families who need additional assistance can go to maps.nyc.gov/prek and fill out a Get in Touch Form, call 718-935-2009, or visit one of DOE’s 12 Family Welcome Centers.