Self-Certification by Scaffolding Companies Would Be Replaced with City Inspection

New York, NY – The 349 miles of scaffolding covering New York City has begun collapsing on the residents it is meant to protect. Under the current laws, scaffolding is self-certified for safety by the contractors who install it, without any independent inspection by the city’s Department of Buildings. Under new legislation Int. 1353 authored by Council Member Ben Kallos and sponsored by Council Members Adams, Chin and Public Housing Chair Alicka Ampry-Samuel, scaffolding that has been up for a year or more will be required to undergo safety inspections by the Buildings Department at least once every three months at the expense of the building owner. Two of the council members who are co-sponsoring the bill have had scaffolding collapses in their districts, some resulting in serious injuries.

There have been numerous collapses in recent memory resulting in both severe injuries and harm to the public. Some additional examples include:

In the SoHo collapse, Katherine Lefavre, newly married, and a model for a top agency, was injured with her spine fractured in 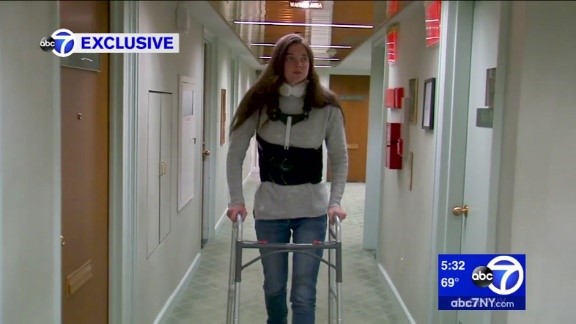 five places, losing her career and much of her independence, as reported by ABC 7 on Your Side Investigation.

“We have seen far too many scaffolding collapses in the city of New York that result in preventable injury or even death and it is clear that independent examination is necessary,” said Council Member Adrienne Adams. “We need scaffolding during construction but it must be inspected by the Department of Buildings to ensure public safety. I applaud Council Member Kallos for this thoughtful legislation.”

“The unprecedented development around New York City is at a rapid pace. Ensuring the safety of our residents around construction sites is paramount. Longstanding scaffolding has created public safety issues and it is my job to address these concerns. I am proud to co-sponsor legislation that would require scaffolding companies be subjected to safety inspections by the City,” New York City Council Member Alicka Ampry-Samuel.

“It is clear that the current practice of allowing scaffolding companies to self-police for safety never worked,” said Council Member Margaret S. Chin. “I am thrilled to co-sponsor this bill, as it will ensure that the Department of Buildings will provide City-wide safety standards to these companies. As important as safety is, the bill will also incentivize the quick repair of facades thanks to the escalating fee structure which charges the contractors for every inspection. This will lead to a vast improvement of quality of life across our City, as repairs will be done in a timely manner leading to fewer shadows on our streets and other issues associated with perpetual scaffolding.”

On the State level, Assembly Member Robert Rodriguez introduced a bill A.642/S.1918 in co-sponsored by State Senator Liz Krueger requiring construction to take place at least 10 days a month over a year for a scaffolding permit to be renewed.

“Scaffolding that fails to protect the residents it’s designed to protect is a public safety hazard that needs immediate attention by the City.  We introduced legislation to deal with scaffolding that stays up indefinitely with little or no work being done, but clearly more regulation is needed in this industry.  I applaud CM Kallos for introducing this legislation and continuing the efforts to improve how we safely build and repair buildings in New York City,” said State Assembly Member Robert J. Rodriguez.

“It’s bad enough that we regularly see scaffolding staying up for years, apparently unused. But when it is used, we can’t even be sure it will serve its purpose and keep us safe. Clearly, the self-certification process is not sufficient. I’m hopeful that this bill from Council Member Kallos and his colleagues will move quickly through the Council and begin to finally address this blight on our neighborhoods,” said State Senator Liz Krueger.

Current law only requires a sidewalk shed be inspected every six months and allows for “self-certification.” This self-certification was found to be the cause in the SoHo collapse after the engineer cut corners both during the construction and the inspection process. Under the legislation, inspections will be conducted by DOB with the cost of the inspection covered by the building owner. The inspection fee escalates from $175 for the first two inspections, to $250 for the third, and $1000 for the fourth and subsequent inspections. This escalating fee structure will incentivize owners to repair the façade condition that necessitated the installation of the sidewalk shed and get the sheds down sooner.