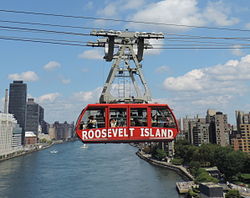 New York, NY – Today, the City Council voted to approve a potential franchise agreement between the City of New York and the Roosevelt Island Operating Corporation (RIOC). After more than 20 years of operating without an agreement, a proposed franchise has been approved for two 25-year terms, granting the City the authority to negotiate with RIOC to continue operating the unique and iconic aerial tramway from Tramway Plaza on Second Avenue between 60th and 59th Streets over the East River to Roosevelt Island.

“The Roosevelt Island Tram is here to stay. After 20 years of needless bureaucracy, we’ve protected the tram through 2068, the end of RIOC’s 99-year land lease,” said Council Member Ben Kallos who represents Roosevelt Island. “Thank you to DOT Commissioner Polly Trottenberg and RIOC President Susan Rosenthal for their partnership in protecting the tram.”

“The Roosevelt Island ‘Tram’ is part of what makes this island unique and special in comparison to Manhattan. We are proud to have it here and we are excited to see it will continue to serve our island and the rest of New York City for generations to come,” said Susan G. Rosenthal President of the Roosevelt Island Corporation (RIOC). “Thank you to Council Member Ben Kallos and the DOT for their help and commitment to bringing both entities together to discuss a possible agreement for decades to come.”

“Thanks to the collaboration between the City Council and DOT we now have the framework in place for a franchise following today’s Council vote,” said NYC DOT Manhattan Borough Commissioner Luis Sanchez. “The Tram continues to be an important and iconic part of the transportation network serving Roosevelt Island, its residents and visitors.”

The Roosevelt Island Tramway (“Tram”) began operating in 1976 and for 13 years it was the only alternative to the Welfare Island Bridge for getting on or off the Island. Prior to the Tram the Queensboro Bridge offered a trolley from 1909 to 1957 and an elevator from 1930 to 1973. In 1989 an IND subway station opened a stop on Roosevelt Island. At one time the Tram was the only commuter aerial tramway in North America and is the oldest of the 3 currently operating on the continent.

RIOC’s predecessor, the New York State Urban Development Corporation was granted the original franchise agreement in 1974, which expired in 1995. RIOC has operated the Tram on an interim basis as discussions between the Council and RIOC in the decades since had failed to produce a successor agreement because of disagreements over advertising. The new approval settles past disagreements by allowing for the continuation of advertising on the interior of the cars and stations, but prohibits advertisements on the exteriors of the stations and tram cars outside the iconic lettering of “Roosevelt Island.”

The potential franchise agreement approved by the City Council provides two terms of 25 years through 2068 when the 99-year lease from the City of New York to RIOC expires. The franchise fee is half of one percent (0.5%) of gross receipts collected by MetroCard swipes. The approval for the potential franchise agreement was negotiated between the Department of Transportation (DOT), Roosevelt Island Operating Corporation (RIOC), and the Council Member Ben Kallos on behalf of the City Council which votes on the authorization of franchise agreements. With the approval in hand DOT and RIOC will now begin drafting an agreement.