Upper East Side Patch,NYC Council May Liberate NYC Streets From the Blight of Ever-Lasting Scaffolding by Brendan Krisel

Council May Liberate NYC Streets From the Blight of Ever-Lasting Scaffolding
http://patch.com/new-york/new-york-city/council-may-liberate-nyc-streets-blight-ever-lasting-scaffolding 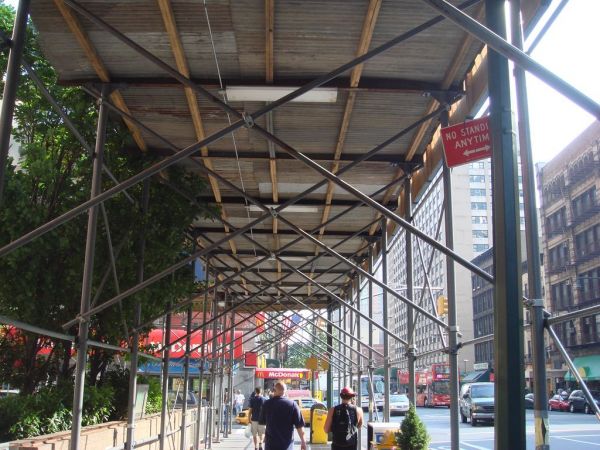 If you guessed scaffolding, give yourself a pat on the back. But the scourge of scaffolding may be beaten back by a new City Council bill aimed at liberating city streets from the hulking iron structures.

City Councilman Ben Kallos, who represents the Upper East Side and parts of Midtown, proposed a new bill to wage war on the city's nearly 9,000 units of scaffolding — also known as sidewalk sheds — by placing strict regulations on how long scaffolding is allowed to stay up and by punishing people who opt to leave scaffolding up rather than finish inspections and construction projects.

If passed, the bill would require building owners take a scaffolding unit down within 90 days of its construction, according to a press release from Kallos' office. If needed, building owners could receive a 90 day extension to fix a dangerous condition.

If the scaffolding remains after the six-month period the city would take action to finish the project and bill the building owner for the costs. In addition, if work ceases for 7 days on any given scaffolding unit the city can mandate that an owner take it down or suffer penalties, according to the press release.

"Sidewalk sheds are like the once welcomed house guest that never leaves. While we need them for safety during construction, that construction must happen immediately, and then it is time for that sidewalk shed to come down," said Council Member Ben Kallos in a statement. "It’s time to change the city landscape by removing the swarm of sidewalk sheds that blight our neighborhoods. This legislation is good for businesses, tenants, pedestrians and will improve quality of life for the City."

Under current regulations, scaffolding units can stand for years because the Department of Buildings has no deadline for when a unit must be taken down, according to Kallos' press release. A city law passed in the 1980 mandated the use of scaffolding and regular facade inspections after a college student was killed by falling debris, according to the report.

Often times when a building has a dangerous facade condition an owner will simply leave the scaffolding up to catch crumbling debris rather than pay expensive restoration costs, Kallos said.

But the bill won't go without opposition from powerful — and filthy rich — real estate interests. Frank Ricci of the Rent Stabilization Association — an organization that represents about 25,000 building owners — told the Times that without the use of scaffolding owners would be subject to million dollar repair projects.

In the meantime residents can call 311 to lodge a scaffolding-related complaint with the Department of Buildings.