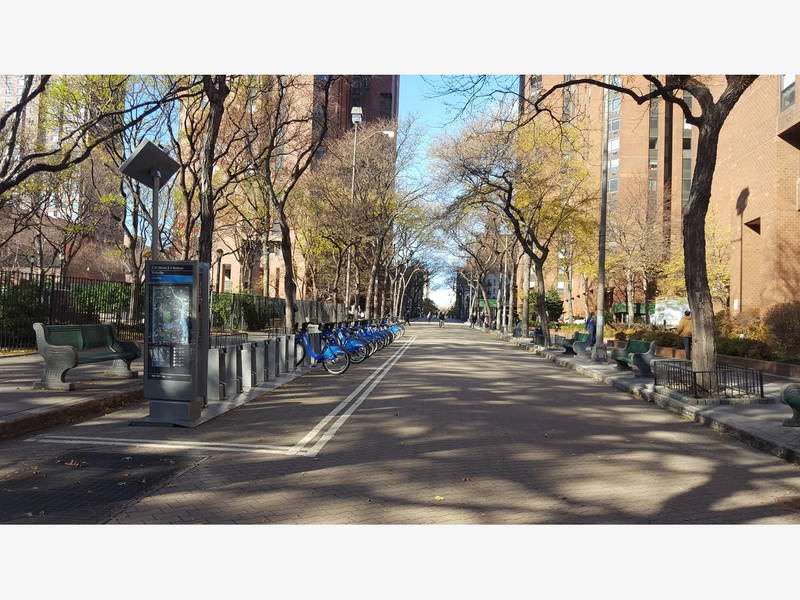 UPPER EAST SIDE, NY — An Upper East Side street that has been free from vehicle traffic for decades was officially designated a public plaza Friday, protecting it from a return of traffic for the foreseeable future.

The stretch of East 91st Street between Second and Third avenues — dubbed James Cagney Place — was named a public plaza under the city Department of Transportation's plaza program.

The cobblestone-paved road has been a a vital open space in the neighborhood for nearly four decades, City Councilman Ben Kallos said Friday.

The street provides safe travel for groups of schoolchildren, benches lining the street serve as a place of respite for residents of nearby buildings and the street also acts as an extension of Ruppert Park, located on the south side of East 91st Street.

Although the street has been protected from traffic for decades, it was never officially de-mapped by the city Department of Transportation. Because the street was still treated like any other, there was always a risk that cars could one day return. The plaza designation does not mean the street will be de-mapped by the city, but will further protect against the return of cars.

Neighborhood residents organized events on James Cagney Place this year to strengthen an application for the public plaza designation. The events included a jazz festival, a movie night and a Halloween parade. On Saturday night a tree-lighting ceremony will be held on the street.

David Rosenstein, a member of Community Board 8 who served on a task force for the plaza, said Friday that the next step in protecting James Cagney Place is to move a Citi Bike station on the street across Second Avenue.