An obscure city rule is preventing the Upper East Side from buying snowplows to clear its bike lanes, two City Councilmembers say. 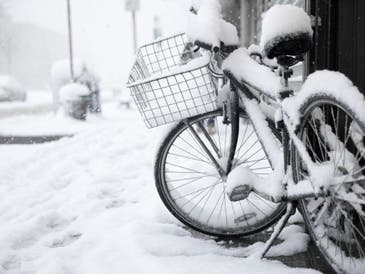 UPPER EAST SIDE, NY — Two Upper East Side officeholders said the city has blocked them from buying snow plows to clear the neighborhood's bike lanes, even though residents asked for them and the money is already allocated.

"It's incredibly stupid to put the health and safety of people riding bikes in jeopardy because the city doesn't want to spend $30,000," said City Councilmember Ben Kallos, referring to the cost of the six-foot plow attachment in question.

New Yorkers have long complained that intersections and bike lanes remain slush-covered for days after snowstorms, posing a hazard to cyclists and pedestrians alike.

Last spring, Kallos and fellow Councilmember Keith Powers committed funds from their respective budgets to buy a $143,000 "Multihog" snowplow, along with the attachment narrow enough to fit inside protected bike lanes. Constituents wrote in to support the purchase, Kallos said, after the pandemic wiped out the annual participatory budgeting program.

The Department of Sanitation supported the plan, Kallos said, and the funding was included in last year's city budget. But once the budget passed last July, he began hearing another story.

"All of a sudden, Sanitation and the city came back and said, 'Whoops, we can't buy this,'" Kallos said. "I am very frustrated because I thought this was something we could have ready for this winter."

At issue is a policy by the City Comptroller's office, prohibiting capital funds from being used to buy "Removable items that are seasonal, or are only periodically attached to the vehicle" — such as the snowplow attachments. (Streetsblog first reported on the clash.)

Kallos doesn't buy the explanation, citing the low cost of the attachment compared to the pricey plow itself.

In a statement, a Sanitation spokesperson said money for the attachments would need to come from the city's expense budget, which covers day-to-day operational costs, rather than the capital budget, which governs longer-term projects.

"Unfortunately, we do not have expense funds to be able to purchase these attachments, given the City's current financial position," Sanitation spokesperson Joshua Goodman said.

"It is very important to us to keep these lanes clear, and we do our best with the equipment and personnel that we have," he added.

Kallos still hopes the city can be pushed to find a way to purchase the plows.

"There's something wrong with a city that cares more about a handful of drivers than the people who actually live, walk and bike here," he said.