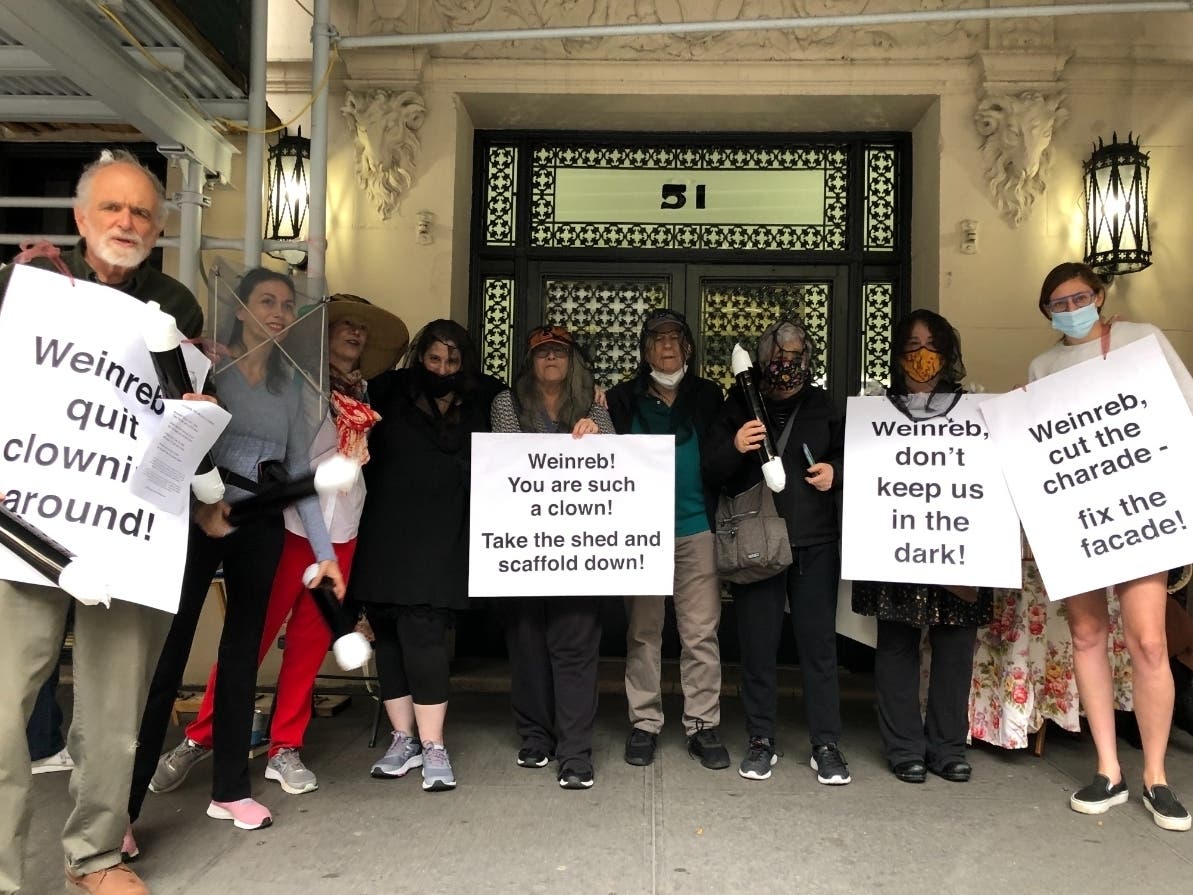 An image of 51 West 86th Street residents who held a mock anniversary party on Saturday for the building's sidewalk shed. (Gus Saltonstall/Patch)

UPPER WEST SIDE, NY — The atmosphere Saturday in front of 51 West 86th Street on the Upper West Side felt both festive and determined.

Residents of the building put together a mock anniversary celebration for their home's one-year anniversary of an extended scaffolding going up. An unexpected development made more frustrating by a sidewalk shed that has sat outside the building since 2006.

Residents placed nets over their heads, held signs featuring the landlord's name Weinreb, and gave speeches outside the UWS building on Saturday.

An image of a resident of 51 West 86th Street holding a sign. Gus Saltonstall/Patch

Manhattan Borough President Gale Brewer and Council Member Ben Kallos made appearances at the mock anniversary and gave remarks. Brewer recently penned a letter to the Department of Buildings to apply pressure on Weinreb Management to take down the scaffolding, and Kallos has authored legislation not yet passed that would stop landlords from keeping scaffolding up for extended periods.

"We were livid. And we still are," one resident of 51 West 86th Street told Patch on the condition of anonymity. "The disregard for the concerns of tenants and for the city laws concerning facade inspections and repairs is staggering."

Find out what's happening in Upper West Side with free, real-time updates from Patch.

The clown Silly Billy was also in attendance on Saturday. After handing out inflated wands, he led the group through a spell attempt at making the scaffolding and sidewalk shed disappear.

"Tenants chose Saturday since a year ago last week, after living with the sidewalk shed for 15 years, scaffolding appeared, without any communication then (or since) from the landlord, covering the entire 16 story facade of the building, blocking light and creating shelter for pigeons and bugs," a different resident who also wished to remain anonymous told Patch. "So a mock anniversary/birthday party, with a clown, seemed like a good idea." 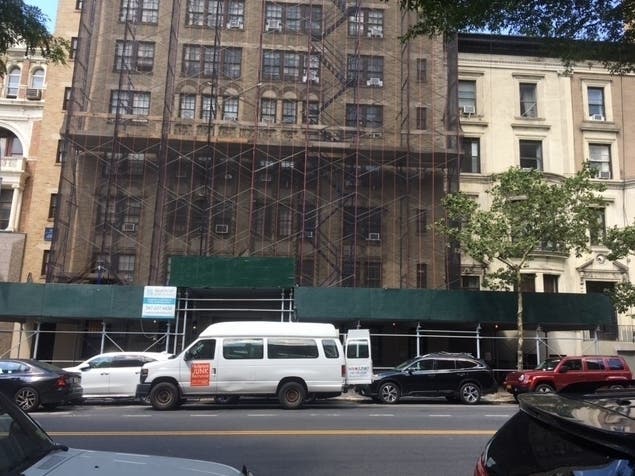 The 51 West 86th Street address is within the Upper West Side/Central Park West Historic District, meaning that Weinreb Management does have to go through the Landmarks Planning Commission to make changes to the building.

Weinreb Management filed a new application on Sept. 8 with Landmarks for restoration and facade work, which remains under review.

Previously, Weinreb Management allowed multiple permits to expire without completing the corresponding work and paid off the fines instead of finishing the repairs.

Weinreb Management has not responded to multiple requests for comment from Patch.

Here's a video of one of the chants from Saturday's mock anniversary.