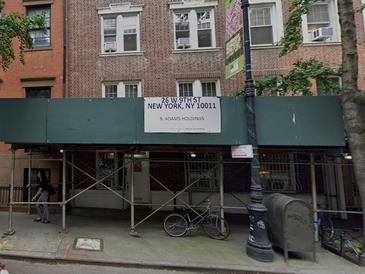 An image of the sidewalk scaffolding shed at 24-26 West 9th Street. (Google Maps)

WEST VILLAGE, NY — The day a sidewalk scaffolding shed first went up over part of a West 9th Street block, Rudy Giuliani was mayor of New York City, "Shakespeare In Love" had recently won Best Picture at the Academy Awards and Britney Spears had just earned her first No. 1 hit.

The shed of wood and metal first went up outside 24-26 West 9th St. on Nov. 7, 1999. Though official records show it came down briefly in 2004 and again in 2007, it quickly returned both times, making it a 22-year blight, frustrated local residents said.

"The owners of 24 West 9th Street must complete repairs to the facade and make their building safe before they can remove the sidewalk shed from the front of the property," a spokesperson from the Department of Buildings told Patch.

"We understand that long-standing sidewalk sheds can be a nuisance, but unsafe facade conditions pose a serious hazard to pedestrians, and this shed is playing an important role in protecting the community."

Find out what's happening in West Village with free, real-time updates from Patch.

The frustration around the structure has grown to such a point that residents created a group called Take It Down, which has tried to push the building's owner and the Department of Buildings to do something about the scaffolding — while also looking to raise awareness about similar long-standing structures throughout the city. 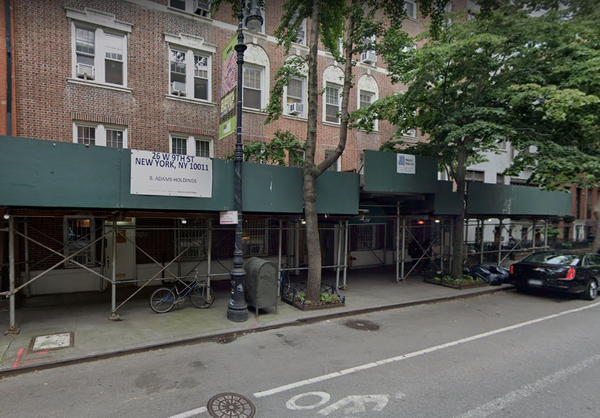 "The shed blocks the light and fresh air for tenants. It means noise all night for neighbors. Drunks, drug users, garbage, and rats collect under these sheds," Take It Down representatives said in a statement to Patch.

"Plants, shrubs, and trees suffer. It's cheaper and easier for owners of older, badly maintained buildings to leave a sidewalk shed up for years, figuring it'll be there for the next issue the building will have. Instead of compelling the landlord to do the work, the DOB just restarts the clock with a new permit."

The idea of restarting the clock on the scaffold with a new permit is important in understanding the saga of the 24-26 West 9th Street sidewalk shed.

If you look up the address on the Department of Building's interactive map of the active sidewalk shed permits in the city, it says the structure at 24-26 West 9th Street has been standing for nine years.

But that doesn't tell the whole story.

A spokesperson from the Department of Buildings provided Patch with its permit data for the West Village address, showing that a sidewalk shed was first inserted at 24-26 West 9th Street on Nov. 7, 1999.

Here's the full timeline of previous active sidewalk sheds at the location provided by the DOB:

The DOB says there was no sidewalk shed at the location for five years from 2007 to 2012, however, a neighbor of the building who has lived there for more than a decade told Patch that the scaffolding did not disappear for that span.

Google Street View does show multiple photos from 2007 to 2012 where there does not appear to be scaffolding in front of 24-26 West 9th Street. 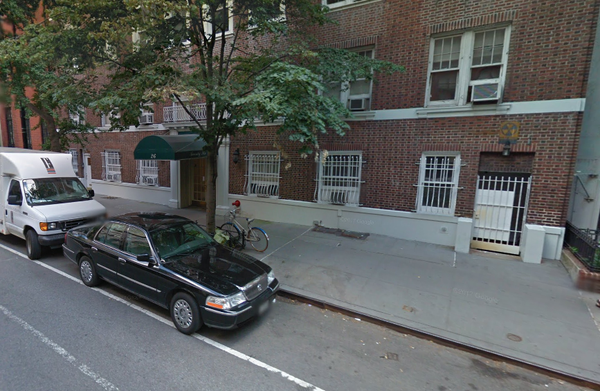 "When I moved in next door, the sidewalk shed blocked the view and light to one of my apartment's two windows. My neighbors told me the scaffold had been up for 12 years, so I figured it would come down soon," a person who lives in a building next door to the scaffolding told Patch. "That was 12 years ago."

Residents of the West Village building have put up a "Quiet" sign against a window in order to try to counteract some of the noise created by people passing through the scaffolding.

The DOB says it will take "appropriate enforcement actions" if the owner fails to continue making efforts on the progress of the repairs.

The owner of the building is B. Adams Holding Corp, which is headed by George Adams. Adams was quick to deflect blame on the scaffolding.

"We're not interested. What you can do is call Landmarks and have them push through our permits, which they've been holding up for such a long time," Adams said. "Landmarks is the problem."

Adams hung up before Patch could ask a follow-up question.

The buildings at 24-26 West 9th Street are both within the Greenwich Village Historic District. Historic Districts make it more challenging to complete construction work on buildings, but do not make it impossible.

The Landmarks Preservation did not immediately respond to Patch's questions on the issue.

City Council Member Ben Kallos has pushed for years to create more enforcement around scaffolding standing for extended amounts of time and has introduced legislation to force building owners to make repairs within 90 days.

"Manhattanites are so sick of this nonsense: sidewalk sheds go up and decades later they are still up. It is frankly embarrassing for us as a City that we cannot get these repairs done and get the sheds down," Kallos told Patch.

"My legislation would force the building owner here to make the necessary repairs for the facade to be safe and then take the scaffolding down all within 90 days. If they don't want to, the city would get it done, and the landlord would have to deal with the bill. With over 300 miles of scaffolding crowding City sidewalks, hurting local businesses, and ruining quality of life, the time is now to enact this reform."