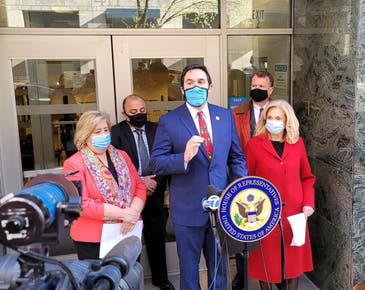 UPPER EAST SIDE, NY — A cohort of Upper East Side politicians and educators celebrated the billions of dollars heading to New York City as part of the federal stimulus package, highlighting the funding for schools in a news conference Tuesday.

Maloney said the funding would help schools safely reopen during the pandemic and fund universal 3-K across the city's school districts.

"The American Rescue Plan, by prioritizing these schooling initiatives, understands and provides what our nation needs to build back better from the COVID-19 crisis by ensuring our students can safely return to the classroom," Maloney said.

Those in attendance included City Councilmember Ben Kallos, Assemblymember Rebecca Seawright, Eleanor Roosevelt Principal Dimitri Saliani and Dennis Gault, Manhattan borough representative for the United Federation of Teachers, who said the city should use its funding to create a pilot program of smaller class sizes in public schools.

"This will go a long way toward guaranteeing a safe, long-term reopening of our schools and a successful rollout of universal 3-K this fall," said Kallos, who pushed the city for years to fund universal 3-K before Mayor Bill de Blasio expanded the program last month.