UPPER EAST SIDE, NY — A heavily-used stretch of the East River Esplanade will get millions of dollars in repairs, city officials announced Thursday, promising a mix of structural repairs and pedestrian improvements for a nine-block stretch of the walkway.

The $80 million project will renovate the esplanade between East 81st and 90th streets, which runs past Carl Schurz Park and is part of the area known as John Finley Walk. It comes on top of several other multimillion-dollar funding commitments that the city has recently made for other segments of the East Side waterfront.

The most visible changes will include smoothing over uneven walking surfaces, replacing street lights, benches and pedestrian railings, and improving drainage systems, according to the Parks and Transportation departments, which are both handling the project.

Meanwhile, the esplanade structure itself — a roof deck built atop the FDR Drive in the 1930s — is also in for repairs. The city's investment will include mending the esplanade's underside, renovating walls along the highway and replacing concrete girders.

Unlike some other parts of the walkway, this area is in relatively good shape, according to Jennifer Ratner, founder of Friends of the East River Esplanade, which has instead focused its recent advocacy around the crumbling East Harlem waterfront further uptown. 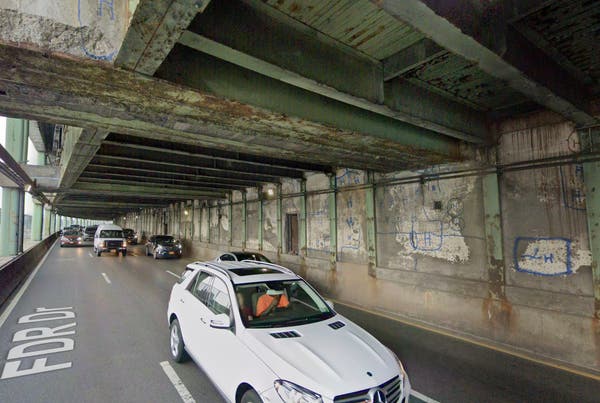 A view of the FDR Drive around East 84th Street, which is set to be rehabilitated under the city's new funding commitment. (Google Maps)

"This is one of the nicest swaths of the pedestrian esplanade by far," she told Patch.

The underside, however, is a different story. Driving along the FDR last week, Ratner — who did not yet know about the upcoming repairs — said she thought, "This thing looks like it's going to collapse any minute."

The city provided no timeline for when work would begin, saying details would be determined during the design process. The Parks and Transportation departments will present the project Thursday night to Community Board 8.

"John Finley Walk is an incredible spot to take a stroll and enjoy the waterfront," Mayor Bill de Blasio said in a statement. "These infrastructure improvements will ensure New Yorkers will be able to enjoy this beautiful promenade for generations to come." 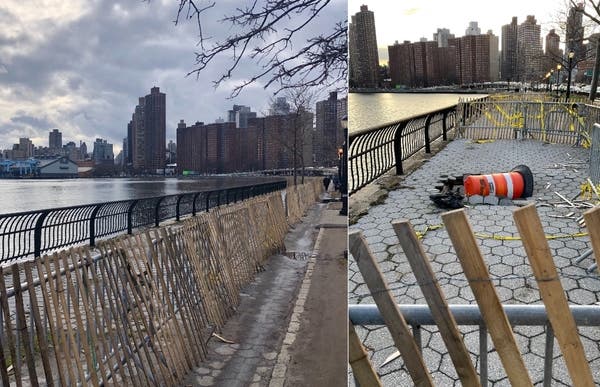 Other parts of the esplanade further uptown in East Harlem are in more urgent need of repair, advocates have said. (Nick Garber/Patch)

"The past 15 months of COVID-19 have only made more clear just how essential open, outdoor spaces are to New Yorkers," Maloney said in a statement. "Even before the pandemic, East Siders felt the strain of living with some of the least park space per capita in the city."

Thursday's announcement came about six months after the city announced a $284 million project to repair another stretch of the esplanade in even worse shape: the area between East 94th and 124th streets in East Harlem, including the roped-off Pier 107.

All told, the city under de Blasio has invested more than $300 million in repairs to the East River waterfront, not including the new funding. Recently completed repairs included:

Longer-term East River projects still in their design stages include:

Meanwhile, the city is also working separately to extend the esplanade a few block south from its current terminus at East 61st Street. That extension down to East 53rd Street is on pace to be done by late 2023.