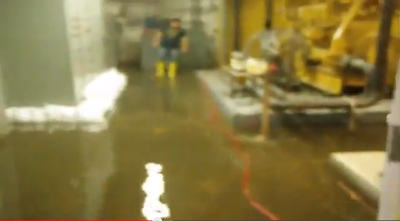 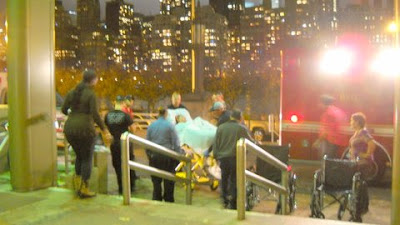 Image of Patients Evacuated From Coler Hospital  By Judy Berdy
of over a hundred fragile patients to Goldwater Hospital....

This excerpt from NYC Health & Hospitals Corp (HHC) video The River In The Basement shows what it was like at Roosevelt Island's Coler Hospital during the 2012 Hurricane Sandy.

Congresswoman Carolyn B. Maloney today lauded an announcement that the City has secured a commitment of $181 million in funds from the Federal Emergency Management Agency (FEMA) to repair and protect Coler Specialty Hospital on Roosevelt Island, which was damaged during Hurricane Sandy. The funds will be used for the replacement of a generator that was destroyed, reimbursement for repairs already completed to the electrical system, and a flood wall that will protect critical parts of the campus to the 500-year flood level.

“These federal funds will help ensure that Coler Specialty Hospital can continue operating without interruption when the next big storm hits,” said Maloney. “The entire New York Congressional Delegation came together to fight for these funds, and wisely sought resources not just for repairs, but also for mitigation. Coler Specialty Hospital is an important facility and it sustained substantial damage and had to be evacuated during Hurricane Sandy. We are taking the necessary steps to be sure that doesn’t happen again.”

Rebuilding and resiliency for HHC hospitals are essential investments for a City prepared to take on the next Sandy. Senator Schumer and Mayor de Blasio merit recognition for their leadership in securing FEMA federal funding and investing it in our public hospitals.

Today, Mayor Bill de Blasio and U.S. Senator Charles Schumer announced that the City has secured a commitment of at least $1.6 billion in funds from the Federal Emergency Management Agency (FEMA) to repair and protect the City’s public hospitals damaged during Hurricane Sandy.

The at least $1.6 billion package will include reimbursement for repairs to HHC facilities for damage incurred during Hurricane Sandy, and funds for mitigation projects that will protect the hospitals from the impact of future extreme weather. It is in addition to the $142 million HHC already received from FEMA for emergency stabilization measures, partial repairs, and temporary flood barriers.

“Few services are as critical as our hospitals during extreme weather. This unprecedented investment will make four key public hospitals much more resilient next time they need to be,” said Mayor Bill de Blasio. “Thanks to FEMA’s $1.6 billion commitment, we’re taking a major step forward in advancing our comprehensive resiliency plan and ensuring that doctors, nurses, and health care workers will be able to do what they do best—serve their patients. We’re grateful for Senator Schumer’s continued partnership in securing these—and so many other—funds as we build a stronger and more resilient New York City.”

“This historic, over $1.6 billion federal investment will provide a massive shot of adrenaline for New York City’s public hospitals, and their physical and financial recovery from Superstorm Sandy,” said Senator Charles Schumer. “The largest of its kind, this FEMA Public Assistance award will help ensure that our public hospitals have the necessary safeguards in place to operate continuously during a storm, mitigate damage and power loss, and, if evacuation is necessary, quickly return to normalcy. Smart recovery and resiliency work at New York’s great public hospitals, which serve millions each day, is exactly what we had in mind when crafting the Sandy relief bill, and I’m thrilled to have helped deliver this federal funding.”

“Superstorm Sandy brought tremendous damage down on New York City’s hospitals—but today, we’re building them back better and stronger than ever before,” Governor Andrew Cuomo said. “By getting these four hospitals the resources they need to recover and become more resilient, we’re laying the groundwork for a safer and more prepared health network in the future. This is another step forward in our work to build a stronger New York State, and I want to thank all of our federal, local and community partners for helping to make this progress a reality.”

“New York City’s public hospitals serve a very vulnerable patient population and must not be allowed to remain susceptible to future storms,” said HHC President Dr. Ram Raju. “The local communities look to HHC hospitals for more than just health care, and the cost of shutting them down is human suffering. HHC hospitals returned to service quickly after Sandy thanks to the extraordinary efforts of their dedicated staffs, but they remain at risk. I’d like to thank FEMA for an aid package that recognizes the need for public hospital resiliency. And, of course, Mayor de Blasio and Senator Charles Schumer, for their efforts in helping the City’s public hospital system.”...

Click here for the full Press Release from the Mayor's office and here for more on what it was like at Roosevelt Island's Coler Hospital during Hurricane Sandy.