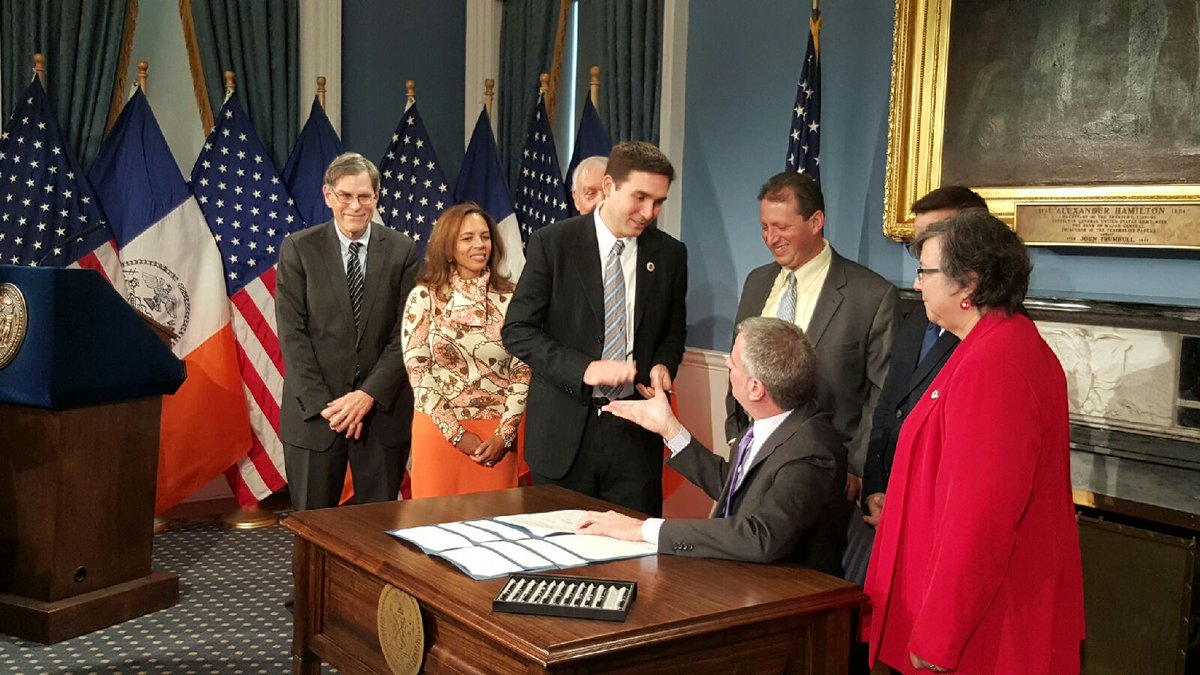 .@BilldeBlasio signs historic ethics reforms into law, including my bill to ban outside income in the City Council.

and issued this press release today:

The New York City Council is now full time with outside income banned, following the signing of legislation authored by Council Member Ben Kallos by Mayor Bill de Blasio. This new legislation paired with ending the practice of doling out stipends known as "lulus" to certain members, which the Daily News has called "legal bribery" will go a long way in keeping the Council free of corruption.

“City Council Members will be working full time for their residents without the corrupting influence of stipends and outside income,” said Council Member Ben Kallos. “New York City continues to lead with reforms the people want to see at all levels of government. Thank you to Speaker Melissa Mark Viverito for bringing reform to the City Council and Mayor Bill de Blasio for signing these bills into law.”

47 Council Members, are offered a stipend of between $5,000 and $25,000 for serving as committee chairs or leadership. 34 council members made a pledge to Citizens Union as council candidates in 2013 to limit stipends to the Speaker and Minority Leader. Despite their pledges only 10 members refused the money in 2014 and for their entire terms with two more joining in 2015:  Brad Lander, Alan Maisel, Carlos Menchaca and Mark Treyger of Brooklyn; Andy Cohen of the Bronx; Dan Garodnick, Ben Kallos, Mark Levine and Helen Rosenthal of Manhattan; Jimmy Van Bramer and Rory Lancman of Queens; and Steve Matteo of Staten Island.

Conflict of Interest Board (“COIB”) outside income disclosure forms will also be available online for elected officials as part of legislation introduced by Council Member Jimmy Vacca for which Kallos is co-prime sponsor also signed into law today. In 2010, then advocate Kallos worked with the New York Public Interest Research Group’s Bill Mahoney to request copies using the Freedom of Information Law (“FOIL”), scan and post outside income disclosure forms for state legislators online. Following this action, outside income forms were put online with income ranges by the Joint Commission on Public Ethics (JCOPE).

These reforms have been sought for generations by good government groups, editorial boards, and the public.

Mr. Kallos was interviewed this week by Effective Radio on a variety of issues including affordable housing, ethics and election reform, criminal justice, constituent services and more. Take a listen.