New York Times The Private School vs. the Radical Priest by Alex Vadukul

It sounds like something out of Dickens: A wealthy private school on Manhattan’s Upper East Side wants to build a multimillion-dollar athletic facility that will shroud the remnants of a 19th-century orphanage that was uncovered during demolition. The only thing standing in its way is the local priest — the same man whose accusations led to a cardinal’s being defrocked by the pope.

At the end of a recent Sunday Mass, the Rev. Boniface Ramsey reminded his congregation of this latest crusade. “I just want to talk to you all again for a moment about the wall of St. Joseph’s Orphan Asylum,” Father Ramsey said. “The wall is now in danger of being obscured again by the Spence School. This is a big deal for our parish because there was a relationship between that orphanage and our parish all those years ago.”

As his congregants at St. Joseph’s Church were aware, the neighborhood drama started after a parking garage on East 90th Street was demolished to reveal a forgotten artifact: an eight-story neoclassical facade that was part an orphanage that cared for thousands of children over a century ago.

The orphanage was founded in 1857 and closed in the late 1920s. Today the building is a condominium, its eastern facade improbably untouched, hidden by the garage for decades. But its resurrection will be brief: The lot belongs to Spence, the elite all-girls school, and construction is underway on a facility that will feature nine squash courts and an ecology center. When the building is completed next year, the orphanage facade will be hidden again. 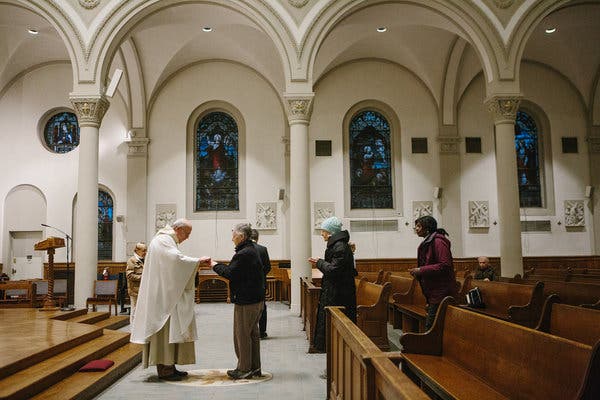 The Rev. Boniface Ramsey during a recent Mass at St. Joseph’s Church in Manhattan’s Yorkville neighborhood. Father Ramsey wants the nearby Spence School to commemorate the former orphanage.CreditGabriela Bhaskar for The New York Times

In a statement, Spence said: “The fact that the site will once again serve children, after a hiatus of over a century of connection with St. Joseph’s, should rightfully be honored.”

It added, “While we will never know whether any young girl’s path passed through both our institutions, the inspiring possibility cannot be excluded and should be considered by all.”

A sense of obligation has also motivated Father Ramsey’s cause. His church and the orphanage were affiliated, and they both tended to the German immigrants of the Yorkville neighborhood in the late 1800s. Several weeks ago, after the garage came down, he started mentioning the wall during sermons and in church bulletins, and he recently wrote to the city’s Landmarks Preservation Commission.

Before a recent Catholic youth league basketball game, Father Ramsey walked three blocks north to the future Spence site. “My aim is to make a fuss about this, and I will continue to make a fuss about this,” he said. “What frustrates me is that Spence should have consulted with the neighborhood. All I want is a plaque. Something that will show what was here. That way the privileged children of Spence can know that children who had no such privilege came before them.”

The orphanage was founded in 1857 and closed in the late 1920s.CreditArchitect and Builders Magazine Volume X, 1908-1909
Crusading against Spence is not quite as daunting as speaking out against the diocese. Outside of his parish, Father Ramsey, 73, is best known as a whistle-blower in the sexual abuse case of Theodore E. McCarrick, a former cardinal and archbishop of Washington. But the private schools of Manhattan can be formidable institutions to meddle in the affairs of. Father Ramsey is unfazed.

“I’m intimidated by the cardinal,” he said. “Not the Spence School.”

Spence was founded in 1892, and it sits a block away from Central Park on East 91st Street. The school’s tuition, according to its website, is about $52,000 per year, and its alumnae include Gwyneth Paltrow, Kerry Washington and Anna Wintour’s daughter. The future athletic facility, which is known as Spence 412, will feature a regulation basketball court and a dance studio. Spence purchased the site for $26 million in 2011.

An email from the school’s real estate lawyer viewed by The New York Times suggested concern as Father Ramsey’s cause gained notice. “We should talk,” the note began. “I have been watching this grow from a cute little story to the sprouting of a public campaign.”

“Apparently, one of the Good Father’s options,” it continued, “is to request that LPC” — a reference to the Landmarks Preservation Commission — “begin the designation process for landmarking the building. You can’t make this stuff up. Call me for more and a few suggestions.”

Outside of his parish, Father Ramsey is best known as a whistle-blower in the sexual abuse case of Theodore E. McCarrick, a former cardinal and archbishop of Washington.CreditGabriela Bhaskar for The New York Times

Although the orphanage wall is now at the center of a distinctly New York drama, part of its facade had been visible to perceptive pedestrians for decades. But most knew little about its past, including Father Ramsey, who recognized the structure only from a book about St. Joseph’s history. Urgency about the wall’s fate accelerated last month after the weekly community newspaper Our Town ran a story about Spence’s plans for the lot.

“We don’t think of ourselves as the Upper East Side,” Father Ramsey said. “We’re Yorkville. So, when I found out one of the last real parts of old Yorkville was about to disappear on the account of people not from here, who didn’t even ask anybody, I had to do something.”

A kind of preservationist fever has since spread around the neighborhood.

“When the girls who go to Spence grow up, I think they will be disappointed to find out what the parents did to the orphanage wall,” said Zora Szemenyei Silber, 62, a retired elementary schoolteacher and part of St. Joseph’s congregation. “Children don’t forget.”

Jim Sidebotham, 68, expressed disdain when he visited the facade. “Like Spence needs more space,” he said. “Squash courts? Just what the girls need. That’s got to be the height of effete, elite snobbery.”“What frustrates me,” Father Ramsey said, “is that Spence should have consulted with the neighborhood.”CreditGabriela Bhaskar for The New York Times

Ben Kallos, a City Council member who represents the Upper East Side, has been trying to temper such passions. “The wall takes us back to the roots of Yorkville, and it harkens back to ‘Oliver Twist,’” Mr. Kallos said.

But, he added, Spence lawfully secured its rights to the site long before there was interest in the orphanage. “I’m hopeful Spence can come up with a solution, but I’m also not sure how much can realistically be done now, and how fair it would be to the school so far into their project.”

Earlier this month, Father Ramsey appeared resigned to the fate of the facade. “It looks dim,” he said. But last week, as news of the cause spread, Spence agreed to hear Father Ramsey’s complaints. Mr. Kallos organized a meeting in his offices.

Spence was represented by its head of school, its architect, a member of its communications team and its lawyer. Father Ramsey arrived alone and brought with him a large book containing baptismal records of the orphanage, its tattered pages filled with rows of cursive handwriting.

Spence proposed ideas: creating a permanent exhibit to honor the site’s past, having Father Ramsey talk to students during an assembly, starting a scholarship named after the orphanage. “It seemed like they really wanted to accommodate me,” Father Ramsey said afterward. “I don’t know how many of those ideas will ever go further than that room.”

The school did agree to his main request: a commemorative plaque.

Back at his church, Father Ramsey reflected on his quest. “I feel I went to bat for the orphans,” he said. “Now I won’t have to go marching up and down the building site with a placard to protest the whole thing. But if that ends up being necessary, I’ll come back.”