New York Is a Noisy City. One Man Got Revenge.

Complaints to the city provided no relief, so a Manhattan resident sues companies to stop them from making noise. It’s working.

There is no escaping the clamor of New York City. Just ask Mike Edison.

He has been jolted awake before dawn by jackhammers and screeching delivery trucks. He asked politely for those responsible to stop. He dialed the city’s 311 hotline. He fired off letters to the police and other city agencies. Nothing.

So he single-handedly opened another front in the war against noise: He sued in small claims court.

Mr. Edison, who has no legal training, has sued a construction company, a real estate developer and the Rite Aid drugstore chain, claiming they were negligent in failing to keep their workers from being annoyingly loud. He has also threatened to sue a half-dozen other companies including Starbucks and Con Edison, the giant utility.

Though his unorthodox legal claims have never been tested in court, the mere possibility has been enough to wrangle settlements that stopped the noise and paid him thousands of dollars.

“This is effective — it actually works — all the other stuff won’t,” said Mr. Edison, 70, a retired advertising sales executive who teaches English to immigrants in Queens.

Still, while Mr. Edison might have succeeded in making his little corner of the Upper East Side of Manhattan quieter, the rest of the city is actually getting louder.

Noise complaints to 311 have soared by 29 percent to nearly 438,000 last year from about 338,000 in 2014, according to an analysis of city data by OpenTheBooks.com, a nonprofit watchdog group, and The New York Times.

The top complaints were about construction-related activities, music and parties, loud talking, banging and pounding sounds, barking dogs and idling engines and honking.

And the problem is getting worse. This year, the city has already logged 127,271 noise complaints through April, up from 119,331 for the same period a year ago.

The complaints have grown despite the city’s efforts since 2007 to enforce a more stringent noise code that had been overhauled for the first time in three decades. The sweeping measures included setting new limits on music played at bars and restaurants and restricting noisy activities to regular working hours.

Noise is not just maddening — it has also been linked to higher levels of stress, hypertension and heart disease.

Mr. Edison moved to the Upper East Side from New Jersey a decade ago after meeting his wife, Carol, a retired school secretary who lived there. Back then, he recalled, it was a relatively tranquil oasis in the city. Not anymore.

Last year, a new apartment tower started going up nearby. Though the city restricts construction to weekdays between 7 a.m. and 6 p.m., work is sometimes allowed outside those hours and the project on Mr. Edison’s street had gotten special permission.

The best things to do in N.Y.C. during the hottest season of the year. This limited-edition newsletter will launch before Memorial Day and run through Labor Day.

Mr. Edison’s suits in small claims court have resulted in settlements from a construction company, a real estate developer and the Rite Aid drugstore chain.CreditNicole Craine for The New York Times 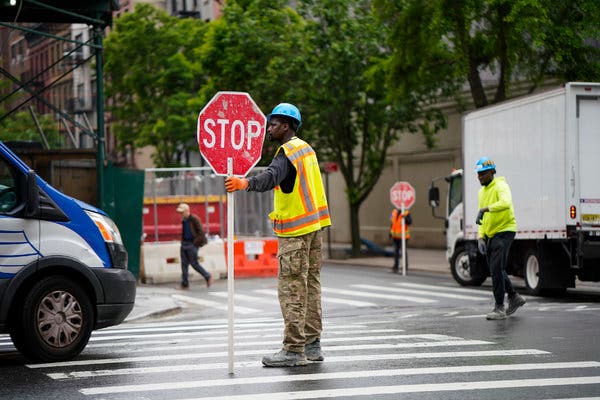 Mr. Edison’s suits in small claims court have resulted in settlements from a construction company, a real estate developer and the Rite Aid drugstore chain.CreditNicole Craine for The New York Times

Buildings officials say it is sometimes safer to carry out work when there are fewer people and less traffic around.

But Mr. Edison said he could not sleep with all the jackhammering and the rumbling from cement trucks. He complained to the contractor, CM & Associates Construction Management. The noise stopped for a while, only to return as loud as ever, he said.

He complained some more. In an emailed response, which Mr. Edison shared with The Times, a company employee acknowledged Mr. Edison’s displeasure about “these early starts” and offered him a “hotel room at your expense.”

That was the proverbial last straw.

“That was pretty rude,’’ Mr. Edison said. “Why should I get a hotel room?”

George Mihalis, a senior project executive for the company, said a misunderstanding had occurred and the hotel room had been offered at the company’s expense. Longer work hours were needed, he said, while pouring the concrete structure for the building because it had to be done all at once.

City buildings officials said the after-hours permits for the project were issued for limited periods, and that an inspection in December found work happening when there was no permit. They ordered all after-hours work to stop.

But Mr. Edison said he continued to be woken up by idling trucks and workers calling out while they waited for construction to start.

His next stop was Manhattan small claims court to sue CM & Associates and Todd Cohen of Icon Realty Management, which is developing the project. He did not need a lawyer and the paperwork was simple.

He prepared his arguments for court, but never got to use them. A lawyer called to settle.

Though Mr. Edison has battled to make his block quieter, noise complaints in New York are rising significantly. CreditNicole Craine for The New York Times

Though Mr. Edison has battled to make his block quieter, noise complaints in New York are rising significantly. CreditNicole Craine for The New York Times

Mr. Edison was just getting started. His next target was Rite Aid after he had been woken up numerous times by delivery trucks unloading at the pharmacy on the corner. He complained, and a lawyer for Rite Aid assured him that it would not happen again, Mr. Edison said. It did.

That time, he said, he tried to reason with the workers. He asked them to keep it down. “They laughed at me,” he said. “I filed the suit the next day.”

Rite Aid offered to settle before the case was heard. He told the lawyer to donate the settlement money to the soup kitchen. All he wanted was for the noise to stop — and it did. A spokesman for Rite Aid declined to comment.

Since then, Mr. Edison has created a form letter he uses to threaten to sue companies over noise. Starbucks and Walgreens Boots Alliance, which operates the nearby Duane Reade, and the trucking services they use were sent letters over noisy deliveries. So was Con Edison after metal plates on the street came loose during repair work and clanked whenever cars drove over them.

The letters have been so effective, he said, that the noise usually stops right away. He has not had to go back to small claims court.

Mr. Edison’s tenacity has impressed some of his neighbors. “I think it’s great, you have to be proactive,” said Robert Weinstein, an insurance consultant, who runs a fan year round in his apartment to drown out street noise.

Even Mr. Edison has been surprised.

“Every one of these guys I went after stopped,” he said. “That’s the amazing thing to me. ”