The upper level of the George Washington Bridge — one of the busiest bridges in the world — turned into a parking lot after an icy 20-vehicle crash, with drivers abandoning their cars.

Buses were forced off the roads in New Jersey, so children had to spend the night at school, sleeping on gym mats until their parents were able to rescue them in the morning.

The New York region was all but paralyzed by an early winter storm that led to recriminations and second-guessing Friday about what exactly went wrong. Even grizzled commuters said they had never endured such a meltdown, venting their fury at those in charge of running buses and trains and clearing highways.

The storm was unexpected but not especially powerful. As a result, the havoc that unfolded in New York City and beyond appeared to highlight the fragility of the region’s transportation system, showing how aging infrastructure has become increasingly unreliable, from the subway to buses to commuters railroads and train and bus stations.

“The system doesn’t have any slack in a crisis,” said Mitchell L. Moss, the director of the Rudin Center for Transportation Policy and Management at New York University. “We’re not really equipped to handle a breakdown in one part when it has to be absorbed by other parts of the transportation system.”

Virtually every mode of transportation is at full capacity and dependent on brittle infrastructure, some of it built more than a century ago. The commuter train and bus networks, held together by crumbling bridges and tunnels, are often just one derailment or pileup away from a breakdown.

The storm had a ripple effect across seemingly every means that people rely on to travel. Snow piled up on roads that went unplowed in the city and suburbs. That snarled city buses, which serve more than two million New Yorkers each day.

The road conditions prevented New Jersey Transit buses from reaching the Port Authority Bus Terminal. Commuters abandoned the terminal, turning to trains that were overloaded and delayed. Only the subways operated relatively normally.

Leaders in New York and New Jersey came under heavy criticism, but insisted that they had been caught off guard by the ferocity of the storm after early forecasts predicted just a dusting.

Mayor Bill de Blasio said he understood why people were upset and would review the city’s storm response.

“I am very frustrated with what happened,” Mr. de Blasio said at an afternoon news conference, adding, “I don’t think it’s fair to say that the city agencies could have stopped all of this. I’m not going to do that because I think that’s just too convenient.”

A storm that produced more snow than predicted snarled the evening commute across the New York City region.CreditJohn Taggart for The New York Times 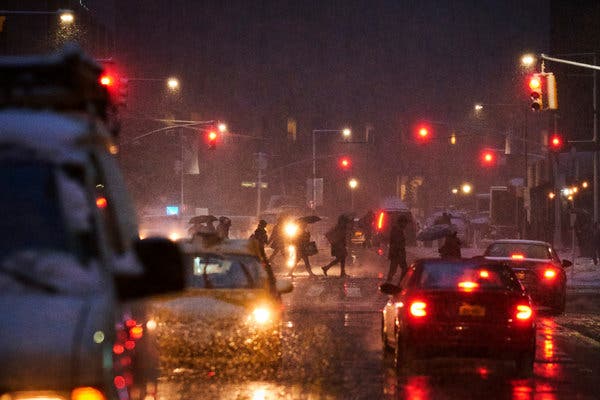 Mr. de Blasio said a confluence of events had conspired to throw off the snow-fighting efforts. The city’s Department of Sanitation had performed miracles plowing roads in the past, but did not have good access to the roads because they were clogged with vehicles, he said.

The plows “can’t levitate above the traffic,” he said earlier in the day.

At Central Park, 6.4 inches of snow were recorded — the biggest one-day November snowfall in 136 years. If the city had known how bad the storm would be, officials could have encouraged people to stay home, Mr. de Blasio said.

[Read more stories of crowded public transit, downed trees and hours upon hours of those trapped in their cars.]

Philip D. Murphy, the governor of New Jersey, joined in the finger-pointing, blaming weather forecasts for underestimating the storm and officials at the Port Authority of New York and New Jersey for their handling of the crowds at the bus terminal in Midtown Manhattan.

Mr. Murphy said one person had died in an accident when a car got stuck on train tracks.

Kathryn Garcia, the city’s sanitation commissioner, defended the snow-clearing effort. “Given the forecast, I do think we were adequately prepared,” she said, though she added, “I think there are a lot of lessons that will be learned from this.”

Ms. Garcia said the city had deployed its entire fleet of about 700 salt spreaders before the snow grew heavy, but many of them were stuck for hours on highways that feed into the George Washington Bridge — essentially bringing their efforts to a standstill in northern Manhattan and the Bronx.

The bridge, a crucial link in the region’s road network, serves about 300,000 vehicles crossing between New York and New Jersey each weekday. During the storm, two major accidents on the upper level shut down traffic in both directions, said Rick Cotton, the executive director of the Port Authority of New York and New Jersey.

If the Department of Sanitation had known the snow was going to be so heavy, Ms. Garcia said, it would have rolled out an additional 1,600 plows at once. Instead, she added, workers had been scheduled for staggered shifts, so there were only enough people to drive 350 to 700 plows at any one time.

In the suburbs, travel on major highways also came to a halt, and icy conditions and countless accidents made some side streets impassable.

A Republican lawmaker in New Jersey called for hearings in Trenton, the capitol, on the state’s response to the storm. The lawmaker, Assemblyman Anthony M. Bucco, said the resources deployed by the Department of Transportation “did not seem to make much of a difference.”

With some elected officials pointing fingers at the forecast, meteorologists explained that early storms are tricky because small changes in air temperature can make a big difference.

The storm produced the biggest one-day November snowfall in at least 136 years.CreditJohn Taggart for The New York Times 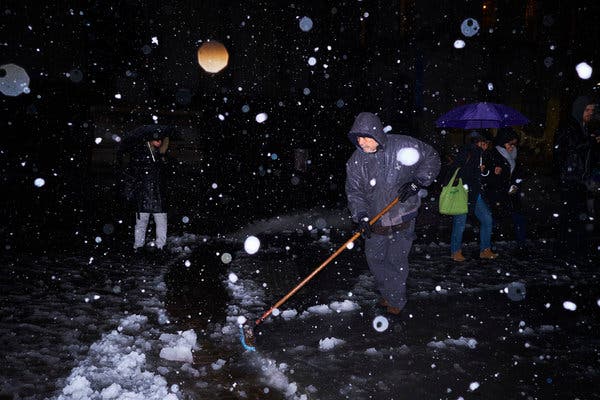 On Thursday, colder air near the ground stuck around longer than expected; that meant that more snow ended up sticking on roads.

“Our forecasts have been getting a lot better over the past 10 to 20 years, but early-season snowstorms are still difficult,” said Brian Hurley, a senior meteorologist with the National Weather Service’s Weather Prediction Center. “When you have an event like this, it’s a reminder we’re still not where we’d like to be all the time.”

The surprising intensity led to widespread stories of people who were stranded. Across the region, students were trapped on school buses snarled in traffic for hours with no bathroom or food, according to parents and elected officials.

A bus carrying preschool students left a Harlem school for children with special needs about 2 p.m. Thursday and still had five students onboard near midnight as it crawled through the Bronx, according to City Councilman Ben Kallos, who helped a mother track down the bus.

Police officers were dispatched to escort the bus as it finished dropping off children in the early morning.

“It was horrible because I don’t know whether he was O.K.,” she said. “I didn’t know what was going on.”

Ms. Reynoso said her son was exhausted and upset. He had not eaten since noon and had been in the same diaper all day.

In West Orange, N.J., about 80 students who were stranded for hours on school buses sought refuge in the Chit Chat Diner until about midnight, said Leo Novakidis, the manager who was on duty Thursday night.

The children, who ranged from 5 years old to teenagers, lined up for the bathrooms, then devoured chicken fingers and french fries, Mr. Novakidis said.

“That stuff is fast to make and they were starving,” he said.

Some fell asleep in booths, Mr. Novakidis said, before school officials took them to a school about midnight to spend the night.

Shahabuddeen A. Ally, the chairman of a community board that represents northern Manhattan, said he had never seen traffic pileups as bad as the ones Thursday night.

“It’s not like this was an earthquake that swallowed up half the city or a U.F.O. showed up,” Mr. Ally said. “This was snow, and snow was predicted.”