NY1 reported the case of Mia Perciballi, a 7-year-old special-needs student living on Staten Island eager to start her first day at a new school who instead got dropped off at her old school. Her mom only knew because she’d put a GPS tracker on her daughter. No one at the Department of Education could explain the mix-up.

Gothamist reported several other school-bus snafus: Parents at a Crown Heights elementary school learned last-minute that routes were canceled due to a driver shortage — after the DOE had insisted pre-opening that it had no such shortages. Another Brooklyn child also got dropped at his old school — and left there for hours while his folks frantically tried to locate him. A bus for kids at a Maspeth charter school didn’t show until an hour after dismissal.

Such snafus forced some families to give up on their child attending the first day of school.

Mayor Bill de Blasio pleaded ignorance in the face of multiple videos and photos of overcrowded schools and classrooms with no social distancing, telling reporters his aides haven’t shown him the images. His excuse: “The first few days of school, it takes time to sort things out, unquestionably. But I’m quite convinced that everyone’s committed to doing this the right way and doing it safely.”

He outright dismissed a Chalkbeat reporter who cited parents complaining about buses not showing up and special-needs kids stuck on buses for hours. “The first week or two of school, there’s always adjustments to be made,” Hizzoner blustered.

In other words: We always screw up at first. That’s pathetic when the city spends $1.25 billion on transportation services for about 150,000 students. 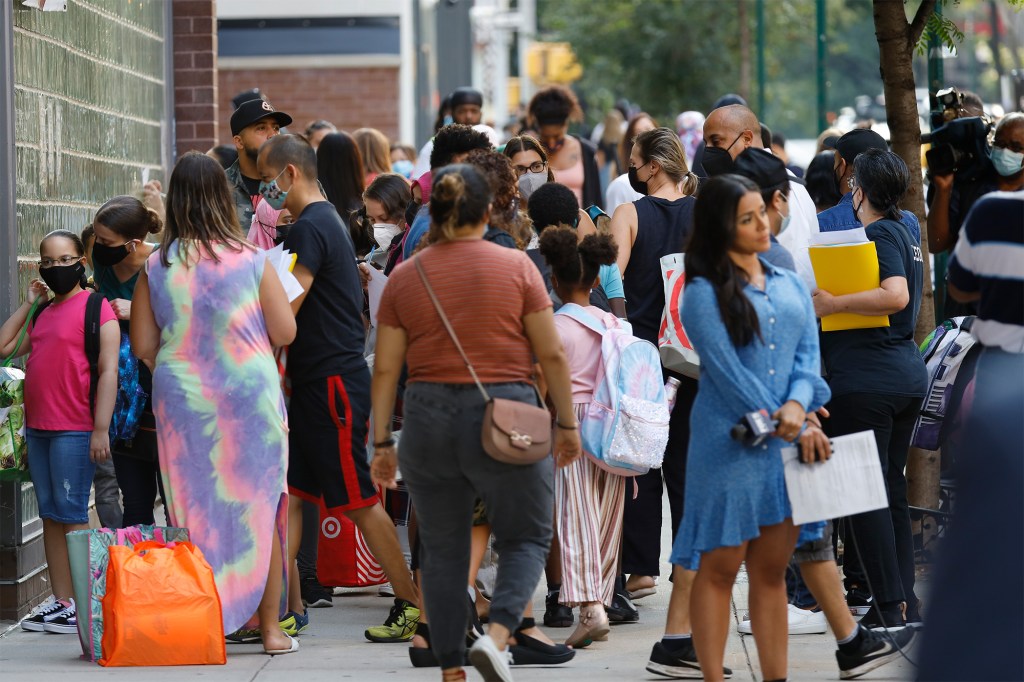 Parents and students outside of PS 51 in Manhattan before the first day of in-person learning on September 13, 2021.

Before opening day, Department of Education and City Hall flacks assured The Post that the city didn’t face a driver shortage. Oops. Nor has the DOE rolled out its long-promised bus-tracking app.

“Parents are worried enough about the Delta variant; they shouldn’t have worry about where their children are” aboard a city school bus, says Manhattan Councilman Ben Kallos, who wrote the law mandating the GPS-tracking system. He also says the tech for the app is stuck sitting on a shelf at the DOE’s HQ.

Meanwhile, state Comptroller Tom DiNapoli says the mayor is leaving a ticking DOE fiscal time bomb for his successor: New initiatives launched with federal assistance will impose costs of $1 billion a year by 2025, as the grants run out.

In short, the city’s post-COVID school spending — nearly $43,000 per student — is utterly unsustainable. Meanwhile, the system still can’t even manage to start the school year without major bus screwups.

And that’s before getting to all the failures in the classroom. The next mayor will need to clean house at DOE.