Imagine we shared our city sidewalks with cyclists and motor scooters. Walkers would be free to stroll down the half that hugs the buildings, while two-wheelers could race back and forth along the other side, between pedestrians and curb.

Sound scary? Of course it does. Most would agree on the folly of such an idea. We all know New York is a walking city, where sidewalks are the pedestrian’s Eden, protected from vehicles. How could we mix people on foot with speeding cyclists and scooters and call it a sidewalk?

Yet a skinny shared sidewalk, where people walk alongside racing cyclists and motor scooters, is what we find on the Queensboro Bridge. At two-thirds the width of most New York sidewalks, the North Outer Roadway is host to a growing population of locals passing on foot, wheelchair, hoverboard, blade scooter, bicycle and motor scooter — even walking dogs — shimmying past each other up and downhill over the East River for the length of nearly 30 city blocks.

New York City bridges can be more like highways than city streets. With no traffic lights, shoulders or speed enforcement, motorists — when they’re not stuck in traffic — rush unbridled across the river. On the Queensboro, that leaves Vespa-style scooters, which otherwise share vehicular lanes on local streets, to seek the North Outer Roadway instead, where their high-speed weaving around cyclists and walkers creates chaos.

Since lockdown, as thousands of New Yorkers steer clear of the buses and subways, the North Outer Roadway has gotten crowded. Meanwhile, riders of the scooter-share platform, Revel, have returned after a safety-reboot. Cycling and walking the Queensboro Bridge has become a tightrope-tread in crash avoidance.

Here’s a taste: pedaling Manhattan-bound in the dark under the glare of intermittent LED lights, I hear the rising roar of a motor scooter over my shoulder. To my right, an old man with a walker inches toward me and a runner with headphones passes us both. To my left, a half-dozen Queens-bound cyclists stream by. Before I can put these thoughts together, the scooter whizzes within inches of my right handlebar in the pedestrian lane, nearly grazing the old man’s walker and disappearing downhill.

After promising 100 new miles of open streets for bikes and pedestrians this spring, City Hall is falling short with only 74 completed as of mid-September. Some of these have since been abandoned as cars run through barriers into protected areas. NYC DOT says that the goal of their most recent fast-track temporary bike-lane deployment is “to support trips made by essential workers,…and encourage more interborough trips,” but lack of protection at key nodes like the Queensboro sends people back to their cars. 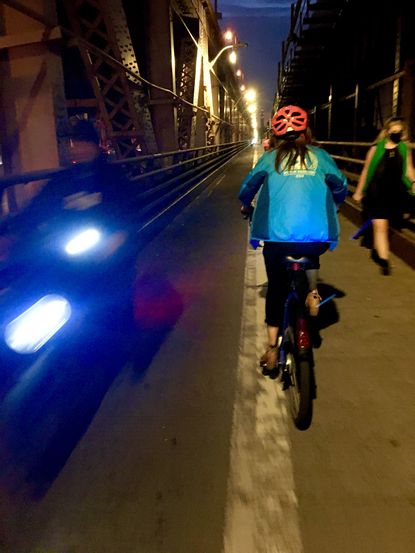 A night commute across the Queensboro Bridge. (Alexander Levi)

To alleviate this, de Blasio could have NYCDOT reassign the Queensboro Bridge’s South Outer Roadway to pedestrians. Currently used as a single eastbound car lane and closed overnight, that roadway is nearly empty during the morning when most travel westbound. Giving it over to pedestrians, at least for mornings, would bring the Queensboro into operational alignment with the Williamsburg and Manhattan Bridges and encourage people to bike and walk safely across the East River, while maintaining eight vehicular lanes.

Cyclist and pedestrian access on the Queensboro Bridge isn’t just a leisure-time amenity connecting Manhattan and Queens locales. The North Outer Roadway is a vital interborough axis for essential delivery workers on e-bikes, heading to and from Manhattan from neighborhoods as far as Flushing and Jamaica. With round-the-clock flow, the afternoon rush hour gives way to a second peak around midnight, after restaurant closing times.

That the North Outer Roadway has avoided serious crashes so far is a testament to micromobility and biking’s forgiving nature. Cycling and scootering, even alongside pedestrians, can function because of clear sightlines and the ability to change direction and stop short — until crowding and higher speeds make it impossible.

Councilmen Jimmy Van Bramer and Ben Kallos have promised immediate funding to build safety fencing on the South Outer Roadway, but NYC DOT says that the earliest they can work on this is 2022. That means the city is forcing people to share a narrow 30-block sidewalk with racing motor scooters for two more years.

New Yorkers are drivers one day, cyclists the next, and on foot in between. How we go places, and get there safely, depends on everyone finding their space in traffic. As New York springs back into action, our bridges must function as the continuation of our local streets and sidewalks, not their breaking point.