City Land
Landmarks Leaves Only One Backlog Item Remaining After Last Meeting of 2016
Editorial Board
http://www.citylandnyc.org/landmarks-backlog-item-remaining/ 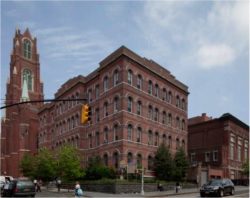 Ten of thirteen items brought to a final disposition were designated by Landmarks and will proceed to City Council for ratification. On December 13, 2016, the Landmarks Preservation Commission made its final dispositive votes on items prioritized for designation in the commission’s Backlog Initiative, with one exception. The initiative, began in 2015, sought to address the backlog of designation items that had been added to the commission’s calendar before 2001 but never brought to a vote. The Commission identified 30 of the 95 items as priorities, and removed the rest of the items from its calendar by no-action letter. A series of publichearings were held, and throughout 2016 Landmarks voted to designate the majority of the items. Landmarks voted to design ten of the final 13 backlog items, with two removed from its calendar, and one to be voted on at a later date.

At the December meeting, Landmarks staff recommended that the Commission remove two of the items that had reached the designation stage from its calendar: The Edgar J. Kaufman Conference Rooms, Lecture Hall and Elevator Lobby and the Immaculate Conception Church of the Blessed Virgin Mary. Landmarks Counsel Mark Silberman stated that the Kaufman rooms, at 809 United Nations Plaza, had been determined not to meet the standard of public accessibility necessary for an interior landmark. He noted that the rooms shared a building with the Permanent Mission of Saudi Arabia, leading to tight security, and that the current stewards of the rooms, the Institute of International Education, sometimes allowed other non-profits to utilize the rooms, but not the general public, like a theater or a restaurant. He noted that the rooms, designed by Finnish couple Alvar and Elissa Aalto, were not under threat, and well-preserved by their owners. Staff asked that the commissioners remove the interior from the agency’s calendar.

Landmarks Director of Special Projects and Strategic Planning Lisa Kersavage said that both the Catholic Archdiocese and the parish of the Immaculate Conception Church of the Blessed Virgin Mary, at 378 East 151st Street in the Bronx, opposed landmarking. Kersavage said that at the time of the hearing the Council seat for the district in which the church is sited was vacant, and had now been filled by Rafael Salamanca Jr., who opposed designation. Salamanca’s opposition meant that it was exceedingly unlikely that Council would uphold designation. Staff recommended that the item be removed from Landmarks’ calendar without prejudice, allowing the church to possibly be brought back for consideration in the future. Chair Meenakshi Srinivasan commented that religious properties often posed difficulties, and that despite many “open and robust” conversations, Landmarks had been unable to garner support for designation from church leadership.

In both instances, commissioners acceded to the recommendations.

One item was laid over for vote in 2017: The Interborough Rapid Transit Powerhouse. Designation of the massive Beaux-Arts 1903 building was widely supported by elected officials and preservationists, but opposed by Consolidated Edison, which still utilizes the building as a working power plant. Kersavage stated that there was no precedent in the City or nation for landmark designation of an operating power plant, and that more time was required to work out a regulatory framework that would allow Con Edison the necessary flexibility and efficiency to maintain the station in service while protecting the buildings significant features. The building will remain on Landmarks’ calendar, with a vote on designation expected in 2017. Chair Srinivasan added that several meetings with Con Edison had already taken place, and the agency would continue to work with the power company to find a satisfactory resolution.

At the meeting the Commissioner unanimously voted to designate the 183-195 Broadway Building in Brooklyn’s Williamsburg neighborhood. The 1883 building was designed by Herman Schwarzmann and William Ditmars in a neo-Grec style incorporating elements of the Aesthetic Movement. The cast-iron building was originally built for commercial purposes and later converted to manufacturing use.

At an October 8th, 2015, hearing Council Member Rafael Espinal and Archdiocese representatives opposed the designation of St. Barbara’s Roman Catholic Church at 138 Bleecker Street in Brooklyn. The 1910 church was designed in Spanish Mission-Revival Style, rare in the northeast. Landmarks research staff called the church one of the “most imposing buildings in Bushwick.” Chair Srinivasan stated that Council Member Espinal now supported designation. The commission voted to designate the lot in part on staff recommendation, removing the rectory from the landmark site. 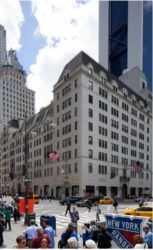 Two hearings were held on the Protestant Reformed Dutch Church of Flushing, now the Bowne Street Community Church. Designation was supported by Council Member Peter Koo, as well as other elected officials, and many local civic groups and preservationist organizations. The church’s board members voted against supporting designation. The building dates to 1892, but the original congregation dated to the area’s earliest days as a Dutch Colony. In 1657, 30 residents of Flushing signed the “Flushing

Remonstrance,” an early statement of religious tolerance in the New World, demanding that Governor Peter Stuyvesant extend religious freedom to Quakers and other minority faiths. As Flushing’s demographics changed in the 20th Century, the church merged with other congregations to become the Bowne Street Community Church. The church is now multidenominational, holding services in English, Chinese, Korean, and Spanish.

The Church’s design is attributed to George Potter, who designed many ecclesiastical and civic buildings throughout New England and Long Island. It features Tiffany stained-glass windows thought to be designed by church congregant and Tiffany Glass Works employee Agnes Fairchild Northrup. At the designation, Commissioner Diana Chapin said the church was significant for its architecture, its history, its Tiffany windows, and the role of women in the community.

The earliest part of the Lakeman-Cortelyou House, at 2286 Richmond Road in Staten Island, dates to the 17th-centry Dutch Colonial period, with further additions made in the 18th century. The oldest portion was built from local fieldstone and features a gambrel roof. Designation was opposed by the owner, Council Member Steven Matteo, and Borough President James Oddo. Commissioners overruled the staff’s recommendation in prioritizing the item, due to its age and significance. The designation is likely to be overturned at Council. Chair Srinivasan noted that the site was somewhat protected by BSA regulations and zoning, which made it difficult to build on the lot. Commissioner Chapin commented that it was gratifying to designate “such a rarity.”

Also in Staten Island, the Brougham Cottage at 4746 Amboy Road, dates to the late 18th century with a kitchen addition built in the early 1800s. The cottage is a rare surviving vernacular Dutch-American farmhouse and was likely built as a rental property. The Parks Department, which has acquired the property, supported its designation, as did Council Member Joseph Borelli.  Devonshire used the occasion of designation to commend Landmarks’ Research Department staff as “the best in the world,” noting that buildings of this period were among the most difficult to research and “pin down.”

Like the Lakeman-Cortelyou House, the Excelsior Steam Power Company Building, at 33 Gold Street in Manhattan, was prioritized for designation by commissioners over staff recommendation. Landmarks staff recommended removal from the calendar due to alterations to the building’s original fabric. The building is the oldest purpose-built commercial generating station remaining in Manhattan, and was designed by architect and engineer William C. Gunnel. The station became operational in 1888, providing electric power to nearby industrial clients. The buildings served as a power station until 1978, when it was sold by then-owner Consolidated Edison and converted to residential use. Designation was supported by Council Member Margaret Chin, Borough President Gale Brewer, and Community Board 1, among others. Landmarks’ Research Department called the building “a significant link to Lower Manhattan’s industrial past.”

At a November 5th, 2015, hearing, designation of the Bergdorf Goodman building was strongly advocated by preservationists and community members, and also supported by elected officials, including Assembly Member Richard Gottfried and State Senator Liz Krueger. The Goodman family, which owns the property, strongly opposed designation, with their attorney Zachary Bernstein arguing that the push for landmarking was “rooted in sentimentality.”

Occupying a prominent site that formerly hosted the Vanderbilt mansion at the south end of Grand Army Plaza, the building was designed Ely Jacques Kahn in a Modern Classical style. Bergdorf Goodman was among the original tenants, and grew to become one of the City’s iconic department stores, ultimately purchasing the entire building.

The vernacular Italianate 412 East 85th Street House was built circa 1860, and is a rare surviving wood-framed house on Manhattan’s Upper East Side. The house has had a series of owners, and undergone some minor alterations, but remains largely intact. The house’s owners, Catherine De Vido and Susan Jordan, supported landmark designation. Council Member Ben Kallos, Gale Brewer, and preservationist organizations also urged Landmarks to designate the property.

The Harlem Branch of the YMCA, now the Jackie Robinson YMCA Youth Center, was completed in 1919 to designs by architect John Jackson. At the time of its construction, YMCAs were racially segregated, and the Harlem Branch was built for the use of African Americans. The building served as a center for Harlem intellectual and social life, and Harlem Renaissance luminaries such as Langston Hughes, Richard Wright and Paul Robeson are associated with the YMCA. There was no opposition to designation on the November 12thhearing. Chair Srinivasan said the cultural and social history associated with the building made it “a standout.” 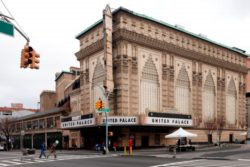 The Loew’s 175th Street Theater, in Manhattan’s Washington Heights neighborhood, was built in 1930 to designs by Thomas Lamb, whose other individual City landmarks include the Regent Theater, the Hollywood Theater, and the interior of the RKO Keith’s Flushing Theater. The full-block building’s flamboyant design incorporates elements of Indian architecture, and is elaborately ornamented with tiered pilasters, ziggurats, and other terra-cotta motifs. The building is now the United Palace, a church and performance venue. Church representatives strongly opposed designation, and Representative Charles Rangel and Council Member Ydanis Rodriguez communicated their opposition by letter.

Commissioners voted unanimously on all the designations. Chair Srinivasan commented that the resolutions of the backlog items were the result of an amazing collaboration with a diverse group of stakeholders. She stated that the commission had striven to be rigorous, transparent and timely in its conducting of the process. She noted that the designations represented all five boroughs and represented multiple eras and typologies. She thanked commissioners, who serve on a volunteer basis, for their dedication, as well as the Commission staff, and the wider “preservation community.”