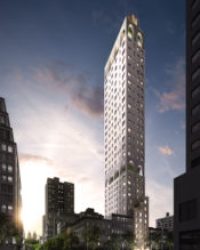 The development of a skyscraper on the Upper East Side has provoked the ire of City officials and neighborhood groups.The developer, DDG Partners, planned to construct a 524-foot skyscraper at 180 East 88th Street in Manhattan’s Upper East Side. The building would be 31 stories, with 16 feet per story, and would be the tallest skyscraper north of 72nd Street. The developer is currently in the process of selling units in the skyscraper, ranging from $3.2 million to $15.5 million and including a 2,076 square foot three bed/bath for $4.7 million.

The site for the skyscraper forms an L-shape, wrapping around several existing buildings and fronting both Third Avenue and 88th Street. Last year the developer carved out a lot measuring four by twenty-two feet on the development’s 88th Street front. Doing so allowed the owner to avoid strict zoning requirements, including height limits for narrow buildings between two low-rise buildings. The move also allowed the owner to designate space on the side facing 88th Street as a required rear yard, when in practice it would serve as an entrance to the skyscraper. The Department of Buildings approved the carve-out.

Working with the City, the developer proposed increasing the carved out lot to ten by twenty-two feet. On October 27, 2016, Buildings approved the increased size, stating that the agency considered the now larger lot “developable.”

A formal zoning challenge by Kallos, Brewer, and State Senator Liz Krueger has since been filed with Buildings. The elected officials argued that: even with the six-foot increase the lot is still unbuildable; ownership of both the lots should force the City to treat them as one under the zoning law; the classification of the space on the 88th Street side as a rear yard violates New York State law; and, despite Building’s approval, the lot is still described as four feet wide in the public record. 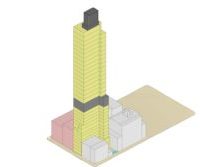 “Six feet doesn’t make a difference. An unbuildable ten-foot lot must not give rise to an illegal 524-foot skyscraper,” said Council Member Ben Kallos. “Zoning laws were created to protect our residents from overdevelopment and must not be eroded by creating new loopholes.”

“It’s unbelievable. This developer’s response to getting caught with its hand in the cookie jar is to just reach for the cookie again,” said Manhattan Borough President Gale A. Brewer. “Nobody’s fooled, and we’re not going to let them ignore this neighborhood’s zoning and illegally build a tower halfway to the moon.”

The zoning challenge will not stop the construction at the site while the matter is considered. Buildings typically responds within 75 days, and its determinations are subject to appeals in the courts.

By: Jonathon Sizemore (Jonathon is the CityLaw Fellow and a New York Law School Graduate, Class of 2016).